Doing What You Do Best (See You In September #3)

For the past several weeks subtle signs have been appearing; shelves of spiral notebooks and bins of pencils, pens, markers and crayons.  Now a more obvious shift is noticeable in the big box stores as summer furniture, lighting, garden supplies and flowers are disappearing.  Back-to-school displays rule the aisles in full force. 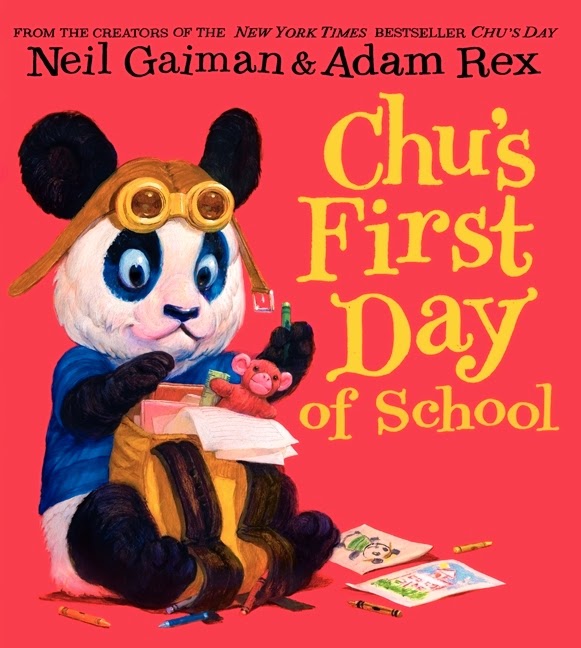 For returning students, teachers and educational staff the routine of beginning school is familiar and hopefully welcome.  After working with kindergarten classes for thirteen years, I am well aware of the misgivings these younger guys and gals have about starting school.  A beloved character who first appeared in Chu's Day (Harper, January 2013) is about to embark on a new adventure.  In Chu's First Day of School (Harper, an imprint of HarperCollinsPublishers) by Neil Gaiman with illustrations by Adam Rex, the little panda guy introduces himself in a big way...a very big way.

There was a thing
that Chu could do.

After his parents drop him off at school on the first day, his teacher, who

had a friendly face,

gathers her students into a circle.  She requests they tell one another their name and one thing they love to do. As they say their name she will write it on the chalkboard.

Jengo the giraffe loves to reach up high and get things.  Pablo the tarmarin loves to climb.  As each boy and girl say their name stating what they love, Chu sits still not saying a single word...no not one.

As the teacher merrily writes down the names, erasing other items on the board to make room,  Chu quietly watches until he is the only one left.  When asked he says his name quite clearly. What happens next is the show part of show and tell without the tell.

Holy chalkdust!  The little panda guy has done it again!  By the response from his classmates and teacher this could be the most talked about first day of school ever in the history of first days of school.


With impeccable timing and purpose Neil Gaiman prepares readers for the inevitable with a single opening sentence.  It reminds those of us who know Chu what we can expect, building anticipation.  For those who don't know Chu's gift yet, it propels them forward wondering what it is Chu can do.  It's brilliant.

A cadence is started when he asks his parents questions, it pauses and continues in his classroom the next morning.  Gaiman enhances the beat with the classmates asking the same question after their introduction.  It is followed with the same sentence about Chu's status.  As Chu's parents walk him home and get him ready for bed that evening, the original rhythm resumes.  The same single word which closed the first book concludes this one.  It creates a calming sense of continuity.  We can rest assured that all is right in Chu's world...and in ours.


Immediately the bright rich red background catches the readers attention, as did the bright yellow on the previous book. I don't know about you but as soon as I opened up the matching dust jacket and book case I started to laugh.  There is something comical but enduring about seeing Chu wearing those goggles as he puts items in his backpack. You can almost hear him humming.  I like that Adam Rex has crayons and pictures of Chu and his school on the floor.  On the back we see...the back of Chu with the companion snail openly grinning at us.

On the title page Chu is sitting in a field of daisies in front of the school leading into the first illustration which demonstrates exactly what Chu can do.  As readers look at each of the illustrations rendered in oil and mixed media on board, they are aware of a warmth which permeates all the pages due to the color palette.  Careful readers will notice the attention to detail; the tiny anchor on Chu's father's model boat, the nod to Groucho Marx in one of the pictures of the duck, the tiny bell around the snake's neck and the feet (hands) on the bathtub.

An added touch is the white outline drawings of each animal doing what they love on the chalkboard colored background as they talk.  As each student speaks Chu's expression changes as he relaxes.  I completely burst out laughing when Chu adjusts his goggles at one point and when viewing the two two-page pictures after his sneeze.  The expressions and body positions are hilarious.

Whether readers are acquainted with Chu or not, Chu's First Day of School written by Neil Gaiman with illustrations by Adam Rex is just the ticket for easing those first day jitters.  It encourages individuality and acceptance of our special qualities and gifts.  For those of us who already know Chu, this is another gem to tuck away in our treasure chest.  This is a collaboration of two outstanding talents worth sharing with the intended audience.  You won't even mind reading it ten times ten.

Please follow the links embedded in the author's and illustrator's names to their websites to learn more about their work.  At Neil Gaiman's website are six printable PDF pages for use with this title.  By following this link to the publisher's website you can view pages from the inside of the book.