Remember thirty years ago when Bonnie Tyler's voice rang out loud and clear singing the lyrics for Holding Out For A Hero?  She sang about what readers of mythology and folktales have always known; people throughout history seek a champion.  People want to believe goodness with always be triumphant over evil. 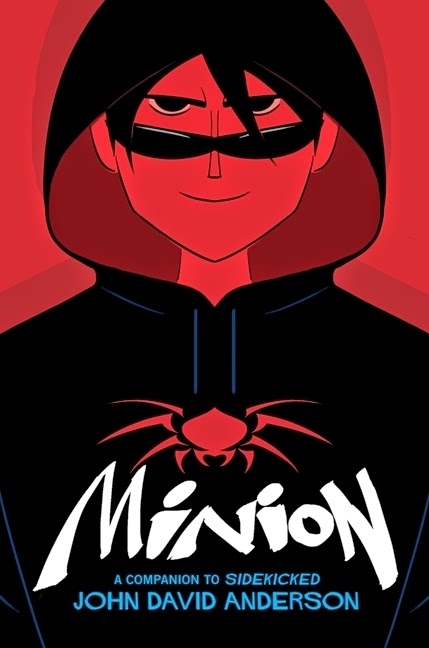 The line between right and wrong can get very fine; people who are basically honorable can make flawed choices and those thought to be bad can unexpectedly be downright respectable.  John David Anderson created the alternate world of Justicia in his novel, Sidekicked (Walden Pond Press, an imprint of HarperCollinsPublishers, June 2013); a world much like our own but populated with superheroes, supervillains and their sidekicks.  In the newly released companion volume, Minion (Walden Pond Press, an imprint of HarperCollinsPublishers) in another town, New Liberty, no superheroes or supervillains have chosen to make an appearance for years.  This does by no means equal the absence of good and evil.

I want you to know, right from the start, that I'm not evil.  I'm not saying I'm Captain Fantastic, either.  I just don't want you to misinterpret everything that I'm about to tell you.

First and foremost Michael has a gift, the ability to look people straight in the eyes and command them to do his bidding.  Secondly, Professor Edson, Dad, is a genius creating small black boxes of various sizes filled with technology capable of doing anything you can imagine...really.  This duo, son and adopted father, have made a life for themselves, carefully leaving no real trace of their existence except for a few carefully selected friends.  They have survived by crossing that fine line drifting into the criminal element.

For protection Michael is homeschooled studying year round.  His best friend, Zach, is a henchman for one of the local mob kings, Tony Romano.  Romano is also a business associate of his father.  After a trip to the local mall one afternoon, on their return home, Michael and Zach witness a crime the likes of which New Liberty has rarely seen.  What makes this event even more startling is the ear-shattering sonic boom which announces the return of a superhero, a streak of blue which drops from the sky and returns with equal speed, named by the media as the Comet. The game being played by Michael, his Dad, Zach and the controlling mobs in town is about to change in far-reaching and frightening ways.

Relationships will be tested, the meaning of family will be defined by the actions of Michael, his Dad, Zach and Tony Romano and a chance meeting with a girl named Viola adds a new dimension to Michael's musings about the direction his life will take.  Understand that woven into all the action of superheroes, supervillains, mobsters and the three teens (not to mention several plot twists and turns) is the constant weighing of choices balanced by intention.  Even the final sentence leaves readers wondering, albeit with a smile on their faces.


The writing style of John David Anderson in this title, as in Sidekicked, keeps you constantly on the edge of your seat, flipping through the pages as fast as you can to discover what happens next.  Chapter by chapter he builds his plot, fleshing out his players' personalities, through Michael's voice and character dialogue.  You have to remind yourself to breath during the descriptive battles between those for whom you are silently cheering and those you hope will lose.

To provide understanding to the reader about the relationship between Michael and his Dad Anderson skillfully employs a technique of flashback at the beginning of many chapters blending it with the present.  His perception of how teens think, act and speak is right on target.  You can't help but want the less than good guys but not quite bad guys to win.  What follows are a few samples of his writing from this book.

"Are you planning on taking over the world?" I asked.
"No," the man said.  "That was a joke.  Why? Are you interested in taking over the world?"
"Are you kidding?" I cringed.  "That's like asking to have everyone's problems dumped on you all at once."
Professor Benjamin Edson pounded on the table with hairy-knuckled fists, causing me to jump out of my seat.  "That's exactly what I keep telling them, but they never listen to me."
I said I didn't know who them was.  He said he didn't either.  This man was bizarre.  I kind of liked him.

Villains wear masks because it gives them courage to do something extraordinary, something they might not have the guts to do otherwise.  But heroes?  Heroes wear masks because deep down inside, I'm guessing, they just want the chance to be normal.  That's my theory, anyway.
Personally, I don't trust either of them.

Minion written by John David Anderson is one wild roller coaster of a read exploring what it means to be good and evil.  Even when the last page is read, you will be reluctant to leave New Liberty and the people you have come to know very well.  I, for one, certainly hope this series will continue.


ABOUT JOHN DAVID ANDERSON
ABOUT THE AUTHOR, IN HIS OWN WORDS:


John David Anderson writes novels for young people and then, occasionally, gets them published. Besides Minion, he is the author of Sidekicked, and Standard Hero Behavior. He lives with his patient wife and brilliant twins in Indianapolis, Indiana, right next to a State park and a Walmart. He enjoys hiking, reading, chocolate, spending time with his family, playing the piano, chocolate, making board games, chocolate, not putting away his laundry, watching movies, and chocolate. Those aren't his real teeth.