Again and again when reading a word, a book title or a sentence within the text, a favorite tune, pop song, musical or movie soundtrack will suddenly start playing in my mind.  When recently reading several books about superheroes, Holding Out For A Hero from the movie Footloose was on a continuous loop.  You never know how things will connect in your brain.

Two years ago Kate Messner started a highly charged mystery adventure series with the title Capture The Flag (Scholastic Press, July 2012).  It was followed by Hide and Seek (Scholastic Press, April 2013) which I recently reread.  The three likable, clever characters, Anna Revere-Hobbs, Jose McGilligan and Henry Thorn have become junior members of a secret group, The Silver Jaguar Society, whose mission is to protect artifacts, many centuries old.  Each of them has adult family members who can trace their origins back to famous artists as well as being members of the society.

In the second book they are whisked away within hours from a reception in Washington, D. C. to the jungles of Costa Rica to locate the stolen Jaguar Cup.  Due to an earthquake the children are separated from their parents.  From one incident to the next you are on the edge of your seat but never more so than when the children have to face Vincent Goosen, the diabolical leader of their enemies, the Serpentine Princes, a group of international art thieves.  In case you are wondering at this point, two pieces have consistently played in my mind when reading these books, the theme songs from Indiana Jones and National Treasure. 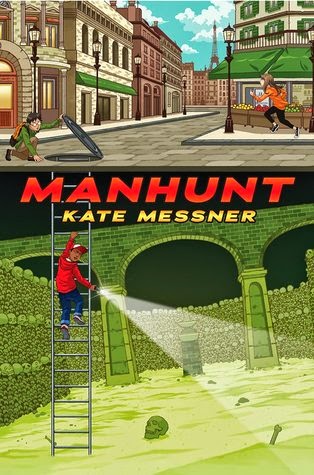 In the recently published (June 24, 2014) Manhunt (Scholastic Press), the third title, problems for The Silver Jaguar Society have seriously escalated.  The children's ability to work together will be tested to its limits.  Will Anna's natural inquisitiveness, Jose's reliance on quotations and all things Harry Potter and Henry's gamer savvy be enough?

Throughout the world as midnight strikes in various countries, valuable artwork is being stolen.  It's one of the largest conceived thefts of priceless pieces in Silver Jaguar Society history; masterminded by Serpentine Princes' leader, Vincent Goosen.  He demands the release of his son from prison.  It is abundantly apparent by the items taken members of the society are also in danger.

From a meeting at the society headquarters in Boston, the children and their adult family members escape to a safe house in Paris, France.  After arriving at a society-member-owned book store, Shakespeare and Company, the adults leave on an assignment giving the children strict instructions.  When the Mona Lisa is taken, their parents don't return and a secret message is left on the store bulletin board, Anna, Jose and Henry know it's time to break rules and help in any manner possible.  With the son of the store owner, Hem, assisting they try to crack the riddle left to them before it's too late.

To add to the predicament in which they find themselves, someone within the society is leaking information to the Serpentine Princes making it difficult to be loyal to someone you might not trust.  When the poetic puzzle turns up missing, they realize others are trying to piece the clues together.  From a crypt at Notre-Dame Cathedral, to a dungeon within the Musee du Louvre, to the burial place, Pantheon, to cells within The Conciergerie and then among the Catacombs, the four relentlessly pursue every lead.

When the unthinkable happens Henry's physical endurance, mental skills and emotional pluck are pushed to their limits.  Trickery and traps abound above and below ground.  Much like the streets and alleys in Paris, this narrative twists, stops and turns.


In this volume author Kate Messner deftly writes a first-class thriller.  You simply do not know from chapter to chapter, page to page what will happen next.  It's as if she has given you a bundle of tiny clues to imagine the solution to this mystery but you're not sure if all the items belong.  Her technique of incorporating cliff-hanger statements or sentiments at the end of chapters keeps you turning pages.  The action scenes give new meaning to the words heart-pounding.

The individual personalities of Anna, Jose, Henry and even Hem, along with their specific family relationships through dialogue, whispered conversations and stress-filled discussions contribute to reader involvement; we are entwined with their movements and emotions.  As in the previous two titles, Messner includes realistic, relevant descriptions of place based upon her personal research as duly noted in her extensive author's note at the book's end.  Here are a few of many marked passages.

"Why are we going to Paris?" Henry must have said it louder than he meant to because the whole van went quiet, and Jose looked back with a worried face.  "I mean...I think we deserve to know what's going on," Henry said, trying to keep his voice even.
"You do," Aunt Lucinda said, peering out the window at the brick buildings rushing past.  "We'll fill you in once we get you to the airport and you're safe."
Her last word hung in the air, and Henry thought about what she meant.
They'd be safe at the airport.
Until they got there, they weren't.

"Yeah..."Anna said, finally breaking eye contact with the skull.  She stood up, brushed off her knees and blinked a few times, fast.  Henry could tell she was trying to get her brave back, but that wasn't easy down here.  "We need to watch for the crossbones.  Remember the photo on that lady's website?"  Anna held up her pointer fingers, crossed like an X.
Jose nodded.  "The spot marked with imperfect X. ' "  And they started down the hallway of bones.


This latest title in the Silver Jaguar Society mystery series, Manhunt, written by Kate Messner is certain to have readers gasping for breath.  A strong sense of loyalty, family and love shines like a beacon amid all the action.  You couldn't ask for a better combination of plot, strong characters and suspenseful mystery than this book.  Thank you, Kate Messner.

If you wish to be in the drawing for a copy of the ARC please leave a comment below.  Include your Twitter handle so I can contact you.  If you are not on Twitter check back this weekend to see if you are a winner.  I will conduct the drawing Sunday evening at 5PM EDT.