One of many things gained from being an avid reader of historical fiction is there are two sides (or more) to every story.  This is readily apparent during a time of war; each choice made by each person creates layers upon layers.  To see events unfold through the eyes of a child, a person powerless to major decision making, is particularly poignant. 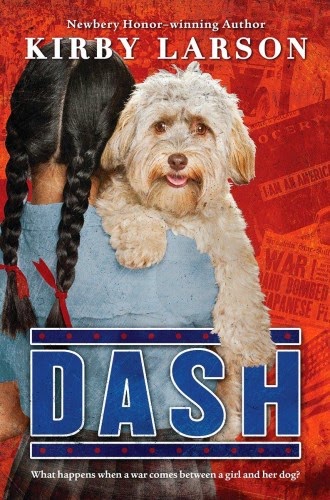 My understanding of World War II deepened when I read Duke (Scholastic Press, August 2013) by 2007 Newbery Honor winner (Hattie Big Sky) Kirby Larson.  As a companion title, Dash (Scholastic Press, August 26 2014), follows the lives of another family on the home front.  Barely completing the first page, readers will have stepped back in time, becoming another member, a silent member, of the Kashino family.

Mitsi Kashino packed her sketch pad, her binder, and her worry in her book bag.  Dash sniffed the straps before flattening himself on top of it, muzzle resting on his front paws.  He watched Mitsi with worried brown eyes.  She ruffled the scruffy almond-colored fur on his head.

Christmas vacation, December 1941, has come and gone.  Returning to school Mitsi, an American of Japanese descent, is hopeful her classmates will no longer stare at her in the hallways or leave hurtful notes in her desk.  Hope leaves when her two friends, Mags and Judy, seem to have acquired another pal, Patty, who is especially cruel to Mitsi.  On the way home from school a group of older boys chase her, circling around, scattering items in her book bag and taunting her with chants.  Thankfully a neighbor, Mrs. Bowker, comes to her rescue, swinging her broom like a ball bat.

Chapter by chapter the dread filling the hearts and home of the Kashino family builds until the day Mitsi and her magic-loving older brother read the announcement posted on a telephone pole.  All people of Japanese descent, whether they were born in America or not, are being evacuated to camps.  They can only take with them those items they can carry.  Stop...think about this...long and hard.  A decidedly horrible situation is made worse when Mitsi is told she cannot bring Dash, her closest friend and confident.

Having built a relationship with Mrs. Bowker, working in her gardens, Mitsi is able to leave Dash with her.  A touching kindness is shown to her by her teacher as all the people gather to ride the trucks to the camp; a gift of pencils and a drawing pad for her artistic student.  Initially they are taken to Camp Harmony (the state fairgrounds) to live in a tiny room with only five cots, a stove to keep them warm and paper thin walls.

These Americans ate in a mess hall, used outdoor latrines for multiple people with no privacy, slept on straw-filled mattresses, delivered and received mail and bought supplies at a canteen.  As days turn into weeks, Mitsi sees her family dynamics change.  Relationships are shifting as connections are made with others at the camp; some are good, others are not.  When a rhythm of living here seems to be forming, more bad news is received.  They are being moved again...by train for three days...to Idaho.


There is something extraordinary about the books written by Kirby Larson.  Great care is taken in depictions of place and people.  Every experience is brought to life through the thoughts of her main character and the dialogue between the other personalities.  Impeccable research leading to specific descriptions creates movies in the minds of her readers.  You are immersed in the worlds her written words weave.

Burning all their Japanese books and heirlooms to maintain their American identity, turning in their radios and cameras to the authorities, and her grandmother having to register because she was born in Japan not only paint a true picture of this historical time period but build a connection between this family and the reader.  We ride with them in the trucks and on the train, stand in line with them at the camps, we suffer their humiliation and lack of privacy, and we feel the resilience and unity of the Kashinos and many others like them.  Our hearts are bound to Mitsi as she struggles to understand, as she develops skills to adjust and survive and writes letters to Dash (Mrs. Bowker) and receives messages in return.  Here are a couple passages from the book.

"What kind of flowers are you going to plant?" she asked.
"Oh, crocus and daffodils and tulips." Mrs. Bowker waved her arm like an orchestra conductor.
"And later on, peonies and roses and gladiolus."
Mitsi thought of the beautiful gardens Uncle Shig planted along the borders of his strawberry fields.  "It must be hard to wait," she said.
"Oh, very hard." Tears glimmered in Mrs. Bowker's brown eyes.  "But that's what life is all about.  Doing winter's work in hopes of summer's flowers."

Mitsi wrapped her arms around Dash.  She inhaled as deeply as she could so she wouldn't forget his smell.
Mrs. Bowker held the camera up to her eye, peering through the viewfinder.  "Say 'cheese' ".
It was a good thing it was only a camera, not an X-ray machine, or all Mrs. Bowker would see was Mitsi's heart broken into a billion kibble-size bits.

Mitsi's throat was raw from the dust, and the ringing in her ears was driving her crazy.  Mom heard from Mrs. Suda who heard from Mrs. Kusakabe that the ringing was because of the altitude.
"Seattle is only about five hundred feet above sea level," Pop explained.  "Here, we're about four thousand feet above.  That's a big difference."
"As soon as you get used to the altitude, the ringing will stop," Mom promised.
Mitsi rolled over on her cot, blanketed in misery.  She was never going to get used to anything about this place, not the dust or the miles of sagebrush or the pancake-flat landscape without one tree to provide shade from the bullying sun.

Please follow the link embedded in Kirby Larson's name to read about her and her other books.
Posted by Xena's Mom at 5:27 PM