Riding On The Right Road

No matter your age the thrill of a dream come true is unmatched.  It may only take a week or sometimes months, years or even most of a lifetime for it to be realized.  It usually seems children can find great joy in far simpler things than adults unless we remember to keep that child's heart alive as we grow older. 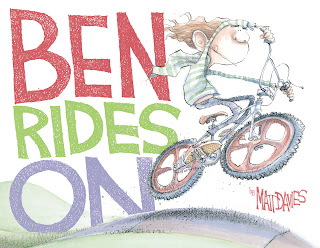 One of the memories many of us have in common is of our first bicycle; the style, color, gears, brakes and wheel size, everything about it, is as fresh as if it happened yesterday. Pulitzer Prize-winning cartoonist, Matt Davies, has written and illustrated his first picture book, Ben Rides On (A Neal Porter Book, Roaring Brook Press) about such a day.  Two boys and one bicycle make for an unforgettable twenty-four hours.

Now that he had the
bicycle of his dreams,
Ben Lukin loved
going to school.

Truth be told, Ben may have loved going to school, but he was in no hurry to get there.  You might say he took one of the most extensive, most varied routes possible to arrive.  He wanted to move up, down, and all around on his new set of wheels for as long as possible.

Ben's day passed in a blur, his thoughts alternating between his deep sense of loss and plans for retaliation.  After the final bell rings, trudging home on foot, Ben heard an odd noise.  Running up, down and all around he came upon his bike, hanging from a tree branch.  It was not the only thing hanging either.

Peering over the grassy cliff, Ben saw Adrian dangling by his arms from a branch jutting out from the valley wall.  Now here's the thing, Ben has his stolen property back (in a somewhat mangled state) with his foe in a precarious position.  It was a time for choices.  Three were made.


It's crystal clear from the opening sentence that Matt Davies has not forgotten what it's like to get the bicycle of your dreams.  Not only does does he rekindle those recollections but he does so with heartfelt, youthful vim and vigor and a special kind of humor.  We laugh along with the story because we can identify so well with the events; his telling is true to life.  In some degree or another we've felt Ben's joy, his sadness, his sense of justice served, his moment of indecision, his disbelief and ultimately his sense of hope.  Here are a couple of examples of his word choices and use of language.

After watching Adrian ride off on his
prized possession, Ben was devastated
(and late for class.)

Then suddenly, without warning, he lunged like an airborne walrus toward his rescuer.

It's the pacing of the narrative (text) with the illustrations which sets this title above others.  Opening the front and back jacket and cover readers get a sense of the action about to unfold.  What the back reveals is Ben's crow friend in flight right behind him as Adrian follows in hot pursuit.  The red, green and steely lavender color introduced here are used throughout the title.

Light, lively, sketchy lines and tiny details make the illustrations breathe; details like the logo on Adrian's T-shirt of the thundercloud with a lightning bolt or the bicycle pictures on Ben's wall in his bedroom above a gear-like lamp.  Alternating the size ( full page, double page, smaller insets), perspective (viewing Ben's route to school, the underside of his shoe as a large element on the page as Ben runs and his face looking over the cliff edge), and framing of the visuals, contributes to the reader's sense of participation in this book.  The addition of the crow (as the crow flies?) appearing on his route to school, staying with Ben throughout the entire ordeal, as companion, helper and adviser, is the crowning touch.  One of my favorite illustrations is Ben riding to school over a viaduct, down a sloping hill, crossing water with shark fins circling, charging up a ramp and soaring through the air over the tops of five school buses in a row.  Pure joy!

I sincerely hope this is the first of many picture books by Matt Davies.  If he would bring Ben back for further adventures after Ben Rides On readers (including myself) would clap and cheer loud enough for him to hear in Connecticut.  I will be adding this book to my Mock Caldecott board on Learnist.

Please visit Matt Davies official website by following the link embedded in his name above.  For a peek at more illustrations follow this link to the publisher's website.
Posted by Xena's Mom at 12:08 PM