The memory of riding a train for the first time is like riding a two-wheeler bike for the first time; it's memorable, not to be forgotten.  I'm not talking about the miniature versions at county fairs or festivals which as a child you thought were grander than grand or even the larger models for tourists at parks.  No, I'm talking about those trains which as an adult are so large you feel dwarfed by their size and power. 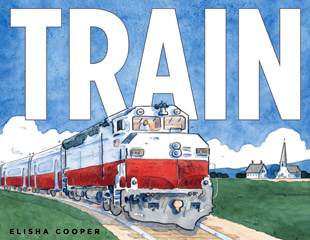 I, for one, have been fascinated by trains as far back as I can remember.  My train set was never a toy but represented the magic of transportation, the marvel and promise of new sights to see, new people to meet.  To this day it is my favorite way to get from one place to another.  Elisha Cooper has written and illustrated a new title, Train (Orchard Books, an imprint of Scholastic Inc., September 24, 2013), which captures the magic, marvel and promise of trains.

The train leaves in minutes.  Passengers buy tickets and rush across to where the train is humming on its tracks.  Conductors look up the platform.  They check their watches.

With those four sentences we readers find ourselves in that very station.  We are among the waiting passengers or perhaps, we are the one who runs to get on the train as it leaves.  Journeying from one town to the next, watching the sights of one city blend into those of another, we are heading toward a daily destination on a Commuter Train.  When it makes a stop, pausing, another engine and cars whiz by us.

Journeying longer distances find travelers seated on a Passenger Train. An engineer works the controls as we shift and sway in our seats.  Different sounds are heard as the cars go by a railroad crossing.  Our senses detect the shift as the train enters the station.  Here the people bear the trappings of suitcases and bags, intending to stay wherever they might be going.

Unbeknownst to them in the rail yard another train is getting ready to make a delivery, a Freight Train. Car after car loaded with food and goods essential to the lives of people are hooked to the engine.  Many times the number of cars makes it necessary for more than one engine to pull.  Do you remember as a child (and even as an adult) counting the cars on freight trains as they pass through town, moving so slowly because of their load?

Winding it's way across one state into the next, the Freight Train is passed by another. People enjoy meals in the dining car and get cozy in the sleeping car, dreaming as the Overnight Train speeds on through the moonlit night.   As the new day dawns, the High-Speed Train streaks by toward the city, as the eager passengers reach the end of their trip.


While it's not easy, I read Train several times focusing on the text alone.  Elisha Cooper states in the Author's Note at the book's end, he rode many trains in preparation for writing and illustrating this book.  He describes the experience with splendid accuracy, noting what one might hear, smell and see with exemplary word choices and pacing.  His depiction of the train at the railroad crossing is perfect...yes...perfect.  Even if you've never been on a train he conveys it so well, you will feel as if you've recently taken a trip.  Here are a couple of examples of sensory passages.

The train clatters past ball fields and bridges, past backyards and ponds. Main streets flash by.  The view changes very second.

The Passenger Train crawls over the tracks through a jungle of gravel, wires, and dirt.  Everything smells of grease and rust and burnt toast.


When the watercolor and pencil artwork used in the illustrations is paired with the text, Elisha Cooper's book, Train elevates to masterful.  The open jacket, two pages including the flaps, features all of the trains on tracks near or next to one another with glimpses of the countryside and cityscapes along the right and left edges.  The color palette used here is continued throughout the book with the emphasis on earth tones.  The dusty, red solid cover provides the background for a cream-colored outline diagram of Engine 212.  Looking like sky, the blue opening endpapers show a single white train track, the closing endpapers a beautiful blend of tracks flowing into one another against the same blue.

The three pages which frame the narrative at the beginning with the two title pages and the page opposite the publication information at the back are patterned with Elisha Cooper's people.  All kinds of people are pictured; young to old, from all walks of life, in a train station.  His ability to convey so much with a single brush stroke takes my breath away.

Within the body of the book, some of his double page illustrations will highlight people or animals in a large white space along the bottom edge; railroad personnel, flying herons.  Or as in the case of the Commuter Train he visualizes the train at the top of two pages while highlighting the inside filled with passengers at the bottom.  Cooper places illustrations on an edge crossing the gutter, one above the other.  Smaller illustrations fill single pages.

His details, worker badges, buildings, bridges, train numbers, flags on the trains, tiny, sketchy labels on the train items or parts of animals make the reader feel like they are being given an inside peek at an artist's personal journal.  As the trains carry people and goods, we are carried with these illustrations along every mile.  One of my favorite pages is with three small vignettes of two girls getting ready for bed, sitting on their bunks as the overhead light shines on them, one reading, the other with her teddy bear and the final of the two looking out at the moon, curtain pulled back with the light from outside coming inside.


While Homer will always have a special place in my heart after reading Train written and illustrated by Elisha Cooper, I felt a deep yearning for travel begin to grow.  Not only will you want to start planning your next trip, but this astonishing book will make you want to take that journey by train.  I should know, the Amtrak website is currently open in my browser.  Thank you Elisha Cooper for another stunning title.

In addition to the Author's Note, a small glossary is included.  Please follow the link to Elisha Cooper's website embedded in his name above.

UPDATE:  Be sure to head over to Seven Impossible Things Before Breakfast to read about the process Elisha Cooper used to create this beautiful, memorable book.