One of the things I miss the most when autumn arrives is the sound of frogs singing their songs at night.  I've always imagined them planning the most wonderful things, exchanging the latest gossip around the pond and looking out for one another with every single croak.  During the daylight each time you walk past a pond, seeing ripples fan out from one or two spots, it's a sure sign there's a friendly amphibian hiding under the surface, frightened by your arrival. 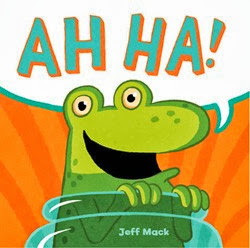 As soon as the coast is clear, their little green selves will pop back up to bask in the sunlight on a smooth lily pad, nearby log or warm rock.  Using only two of our twenty-six letters, author/illustrator Jeff Mack, gives readers a pond's eye view of a day in the life of a very lucky frog in his new title, AH HA! (Chronicle Books).  Jeff Mack may only use two letters but readers will be using three...OH NO!..more than a few times.

We begin this story with Frog lazily floating in the pond, sighing with pure pleasure.

It's quickly followed by

as he discovers the perfectly shaped rock to perch on for a spell.  He is so happy he again utters sounds of total contentment with his eyes closed.  That is the beginning of his troubles.

While he relaxes a child and their dog are sneaking up on Frog, jar and lid in hand.  Yikes!  That was close.  Thankfully the dog was as excited as Frog was scared.

Frog thinks he's crawling up on another rock farther out in the pond.  His instincts must be a little off because this rock turns out to be a turtle, a hungry turtle.  Leaping lizards...er...frogs.  Whew!  As fate would have it, Frog lands on a trusty log.

By now, you have guessed that this is no ordinary log.  Of course not.  It's a sly alligator waiting for the right moment to strike.  Water explodes.  Thankfully there are tall "stalks" for Frog to grasp, out of his foes' reach.

Frog had better be looking where he's leaping.  In the end it's all about perspective or the lesser of four evils.  It's also about a whole lot of luck.


Switching from AAHH! to AH HA! (plus a surprise) but not always alternating Jeff Mack manages to tell a tale filled with suspense at every turn of page; readers will be leery of relaxing from one scene to the next.  His skillful blend of language and intonation create a seamless pace.  Depending on which character is speaking those two phrases can take on many meanings; happiness, the thrill of victory, fright, relief, pain, or the discovery of a snack.


Use of vibrant colors, bold lines and wide eyes immediately grab readers attention on the matching jacket and cover.  Frog looks right at us, wearing a big grin on his face, uttering the title as he climbs out of a jar.  On the back cover three of his would-be enemies are smiling too, while speaking the same two words.  It's clear already the significance of that phrase depends on who is doing the talking.

Opening and closing endpapers picture Frog, arms behind his head adrift on the rippling surface.  The passage of time is shown in the color of the water.  Mack uses every portion of the book to tell his tale, endpapers, title page, and verso.

Two page illustrations throughout are rendered in mixed media.  His perspectives in the visuals are at frog level bringing the reader right into the action bursting out of every page. You never see more than hands and feet of the child. Small details add just the right touch of humor; woebegone look on the dog's face as Frog escapes, the turtle's surprise, Frog resting on the "log" with a weed in his mouth, and Frog sticking out his tongue.

As soon as you see the cover of AH HA! written and illustrated by Jeff Mack, you can hardly wait to open the cover.  The look on Frog's face combined with the vivid colors are irresistible.  While this is a great book to read on your own, especially if you are an early reader, this book is fantastic as a read aloud.

Be sure to visit Jeff Mack's website by following the link embedded in his name above.  You might want to pair this with Frog Song by Brenda Z. Guiberson with illustrations by Gennedy Spirin.  I also reviewed Mo Willem's Big Frog Can't Fit In.  In that review I included a Prezi with lots of frog titles.
Posted by Xena's Mom at 2:12 AM