If you are an educator, it's inevitable.  It happens every year.  It can happen to anyone.  My first thought is to feel sorry for the children and their families.  My second thought is to take all the stuffed animals, creature-cushion floor pillows and special soft chairs home for a good washing and drying.  If it's winter I bag everything up in plastic, sealed tightly and stick it outside for a couple of weeks. 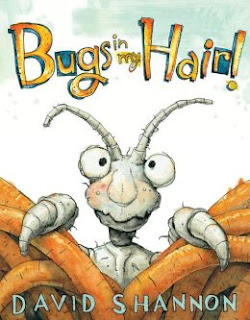 It's as common as dust but rarely discussed except in hushed whispers.  Author illustrator David Shannon tackles the topic of head lice with understanding and his signature humor in his latest title, Bugs in my Hair! (The Blue Sky Press, an imprint of Scholastic Inc.).  Let's banish those bugs!

One day, my mom made
a terrible, awful discovery...

Not only were there lice in this boy's hair but they were planning on having big families.  Eggs were found nested on his head.  That meant itching, lots of itching.  The boy couldn't stand still because of the itching.

It must have been some kind of head lice annual convention.  Even worse was discovering they were enjoying the taste of his blood.  Dreading the thought of someone finding out he had head lice weighed heavier on the boy's mind than the itching bothered him.

Several possibilities were offered as to where the boy might have picked up the lice (not from the dog, though). Sometimes people were in denial about having head lice.  Sometimes people thought they had head lice when they didn't.

You won't believe some of the cures mentioned by the boy.  His Mom went crazy doing the laundry every day.  It's as if their lives were centered around those dreadful bugs.

Those head lice had not learned one important factor, don't mess with Mom.  Moms are relentless when it comes to getting bugs out of their boys' hair.  Will they come back?  This boy is his mother's son...beware head lice.  You've met your match.

My HEAD really ITCHED!
What in the heck were they doing up there?

It's not hard to identify the artwork of David Shannon.  His bold colors, his style and perspective are what readers enjoy about his illustrations.  That giant-size louse, bug-eyed (of course) parting the hair like bush branches, looking straight at readers is an attention grabber.  The back jacket and cover issuing the warning will be bringing on the smiles before the first sentence is even read.  The louse, suitcases in hand, on the title page is hilarious.

Every single two-page spread throughout, including the dedication contains visuals that literally pop off the page.  His fonts, varied in size, style and color, are essential to the story's drama.  The final illustration will have readers roaring with laughter.  It's hard to select a favorite but the living room scene with the big red couch, the lice feet up on the coffee table, one eating popcorn with the remote in its hand, the other reading a magazine, smoking a cigar, the disgruntled boy in-between the two as his Mom walks by with a basket full of laundry is pure David Shannon.


Not only should Bugs in my Hair! written and illustrated by David Shannon be in every school library but probably most medical waiting rooms as well.  It addresses an often avoided subject with the right mix of knowledge and comedy.  You have to love his dedication:

To moms everywhere
and their bottle-tested anti-lice weapons

For links to more information about David Shannon go to my review of his previous book, Jangles.  They are located at the bottom of the post.  Here is a link to one of his book trailers for Bugs in my Hair!  Follow this link for the other book trailer.
Posted by Xena's Mom at 10:53 PM