Throughout the years the fascination with dinosaurs, especially for younger students, has never faded.  Those books are among the most loved books in libraries; copies worn and repaired, gaping holes on the shelves assigned to them because they are always checked out.  I've often wondered if the success of Michael Crichton's Jurassic Park (other than his skills as an outstanding writer) was not because it appeals to our younger selves.  It's hard not to be curious about our planet in the far past, a time so different from our own. 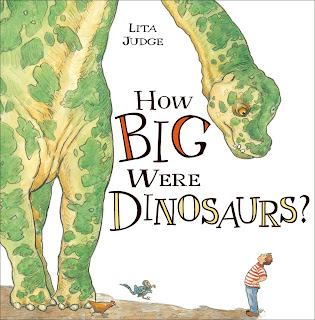 Each of us pursues this interest, as we do any learning for that matter, differently; either by reading, listening, seeing or participation.  Lita Judge (Red Sled, Red Hat) spent three summers on a dinosaur dig after writing a letter to the Royal Tyrrell Museum in Alberta, Canada when she was fifteen.  How fortunate for readers she combines her passion for this subject with her considerable skills as an author and illustrator to present to us How Big Were Dinosaurs? (Roaring Brook Press).

Stalking, running, stomping, crushing.
When we think of dinosaurs we think
of huge MONSTERS.

We do tend to think of dinosaurs as being larger than life.  Even if they wouldn't be looking at us as the first course of a meal, we wonder how we would not be crushed by their slightest movements.  Perhaps not all dinosaurs are as large as we think they are or...some might even be gigantic.

It's hard to believe but there were dinosaurs smaller than a chicken. What a Microraptor lacked in size, it made up for in hunting skills.  The Protoceratops would have been a perfect playmate for a baby rhinoceros, their size so similar. There were dinosaurs living near the South Pole?   Only about two feet tall, Leaellynasaura made its home in the land of long sunless, frigid days.

Imagine walking a dog-sized dinosaur on a very long leash  (they loved meat), galloping to someone's rescue on a horse-sized prehistoric creature or avoiding a SUV-sized brunt covered in armor weighing four times as much as the vehicle.  Have you noticed the sizes are increasing?  Next up is one weighing as much as three cows with three-foot long spiky plates but lacking in the intelligence department.

Not only are the sizes climbing upward but the physical characteristics are becoming stranger and more scary; a unicorn-like spike, a skull bigger than the ceiling height in most homes and claws the length of yardsticks. Yikes!  As daunting as the Tyrannosaurus rex was, it's measurements were diminished by those of the Argentinosaurus.  It would be hard for this beast to sneak anywhere with it's length and weight.  You'll be astounded.

When reading books written by Lita Judge, especially her nonfiction, it's as if we are students in a magical classroom with a master educator who teaches people not any specific subject.  Her approach to providing information is conversational; her sentences a reflection of her enjoyment in sharing what she knows with us.  In helping us understand the varying sizes of these twelve dinosaurs, she compares them to animals, people and vehicles we know.  She educates but entertains.  It's a gift to make learning fun.  Here is a single sentence sample.

And honestly, with a name like Leaellynasaura, you'd think these dinosaurs were tree-eating giants.

Spread across two full pages Argentinosaurus is introduced to readers in all its enormous glory.  Beneath in proportionate size is Microraptor next to a chicken with an astonished guy gazing upward.  Lita Judge has already began to teach us with her matching jacket and cover illustration.

Again on the two pages for the title, she compares the smallest with the largest dinosaurs discussed within this book.  Her pencil and watercolor illustrations not only enhance the text but tell a story of their own.  In the first two pages she gives us a close-up of a Microraptor.  It's how most of us think of dinosaurs. With a page turn we see the reality, the comparison to a chicken.

Two page spreads are dedicated to each dinosaur surrounded but generous amounts of white space drawing attention to the specifics of her pictures.  There is a definite sense of playfulness, a gentle kind of humor, in each visual; Protoceratops weaving beneath an adult rhinoceros, Leaellynasaura peeking around penguins with its large eyes, Tsintaosaurus being shooed out of a garden by a distraught woman with a broom and Torosaurus being pushed and pulled into a large veterinary office.  She completes her book with How Do We Know How Big Dinosaurs Were? explanation with a four page fold-out visually comparing these prehistoric beings with present day people, animals and things.

Lita Judge's newest release, How Big Were Dinosaurs?, is what readers have come to expect and love about her work; a pictorial pleasure along with an interesting and enjoyable narrative.  Readers will want to step into her world of dinosaurs over and over.  When you finish reading a Lita Judge book you feel as if you've been touched by a sense of wonder.  You have a new appreciation for the world in which you live.

A short author's note with a listing of websites and books used as references for the creation of this book are listed on the final page.  By following the link embedded in Lita Judge's name above you can access her website.  Please follow this link to the publisher website to view additional illustrations.
Posted by Xena's Mom at 11:27 AM