Our lives are governed by rules, by laws, principles of etiquette.  Some are written, others are understood.  Within the structure of these guidelines, individual beliefs play an important part. 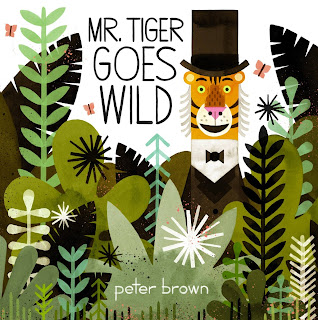 For some following what is, what always has been and will continue to be so, is easy.  For others, it's confusing, frustrating and not where their heart directs them.  Mr. Tiger Goes Wild (Little, Brown and Company) written and illustrated by Caldecott Honor award-winning Peter Brown (Creepy Carrots!) is about being brave enough to break the mold.

Everyone was perfectly fine
with the way things were.
Everyone but Mr. Tiger.

Propriety was pushing Mr. Tiger to his limits.  It was simply too ho-hum, too confining and left no room for play.  The beauty in being a tiger is being wild after all...right?

So Mr. Tiger decided to try something a bit different.  Instead of walking upright like all his fellow friends, he boldly lowered his body to stride out on all fours.  Not surprisingly, it was the right thing to do.

Mr. Tiger was shedding the skins of confinement.  And he liked it.  He liked it so much he did more and more each day.  He ran, he chased, he climbed and he roared a very loud roar.  Let me tell you though, there was a lot of tut-tutting going on by his fellow townies.

The day he jumped into the fountain in the central square, loosing all his clothes, was the final straw for his up-to-that-point tolerant pals.  Sternly asked to leave, he joyfully departed for the wilderness.  Away from the buildings, streets, clothing, and orderly lifestyle, Mr. Tiger went completely wild!

The freedom was exhilarating but something was missing, the comfort of the familiar.  Making his way back to his town, friends and home, he made a startling discovery.  Mr. Tiger's fearlessness had paved the way. ROAR!


In direct spare statements and examples our narrator makes it quite obvious that Mr. Tiger is ready for change.  Peter Brown's word placement and pacing create the same tension and energy for the reader that Mr. Tiger is feeling.  By placing dialogue in speech bubbles along with the narration the story becomes more personal.  We are intimately involved.  We want to roar (and will probably do so with abandon).

Toward the end of June Peter Brown and I exchanged a series of tweets.


ROAR!!! My very first copies of Mr. Tiger Goes Wild arrived! It might have been worth all the hard… http://t.co/rKIWRf2QDE
— peterbrown! (@itspeterbrown) June 25, 2013


@Loveofxena Why YES, the case cover IS different! I was wondering if anyone would notice that little detail...
— peterbrown! (@itspeterbrown) June 25, 2013


It's the care given to every facet of this book, which makes readers want to go wild themselves.  Peter Brown even goes wild in the illustrations created by trying a new technique, using a different combination of mediums, India ink, watercolor, gouache, and pencil which are digitally composited and colored.  If you look closely you will notice the fifth color, orange, which was included in the printing of the book on paper.

The jacket is a double page spread with Mr. Tiger in the wilderness.  The quote on the back,

There is a time and place for everything---
even going wild.

alludes to the changes which will occur as does the front and back cover, a textured pattern of stripped tiger fur, rough to the touch.  The opening endpapers of taupe, gray bricks are a sharp contrast to the closing endpapers done in hues of green in the stylized ferns found in Brown's forest.

The placement of elements on each of the illustrated pages, whether they are two page, single page or several smaller ones on an individual page, is impeccable; the conversation between Mr. Deer and Mr. Tiger,  the movement of Mr. Tiger as he gets his wild idea, the tall building he climbs in the gutter of two pages, or a potion of his, now, unclothed body running off the right page.  Liberal use of white space draws the reader's eye exactly where it needs to go.  Mr. Tiger's facial expressions convey his moods precisely.  One of my favorite illustrations is the two-page spread of toucans in the air, fish in the water, the series of waterfalls cascading over cliffs , trees, ferns and Mr. Tiger roaring.  You can feel joy in the air.

Mr. Tiger Goes Wild written and illustrated by Peter Brown is your ticket to a roaring good time. It's an invitation to be yourself, to be brave and perhaps change those around you.  Some rules whether written or understood are meant to be broken.

And whatever you do, remember to Roar! at least once this weekend.
Posted by Xena's Mom at 5:06 PM