There are portions of the Jordan River in northern Michigan where it's easy to imagine you are drifting along a waterway in another time.  Civilization has left no mark.  Owning my own canoe, smaller than the average size, made trips here frequent and relaxing. 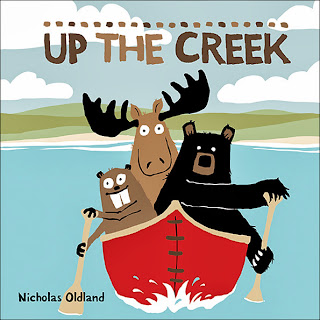 When going with a group in larger canoes, the journey takes on a whole new dimension.  With more than one canoeist in the boat, holding the paddle correctly, reading the water, weight distribution and teamwork, can make the difference between a fun-filled, smooth ride or an unexpected dip in the swiftly, moving, and often chilly, river.  Nicholas Oldland, author illustrator of Big Bear Hug, The Busy Beaver and Making The Moose Out Of Life, brings the friends, previously introduced to readers, together in a new title, Up The Creek (Kids Can Press, September 1, 2013).  It's definitely a canoe ride not soon to be forgotten, especially for this woodland threesome.

There was once a bear, a moose and a beaver who were the best of friends, though they often disagreed.

What they did agree upon was to spend time canoeing together.  The first problem makes an appearance when they all want to be in charge of navigation.  All the weight in the back of the boat makes it flip, dumping them into the water.  A game of Eeny-Meeny-Miny-Moe quickly ends that dilemma.

When the three adventurers are next seen the canoe is not going down the stream but in circles.  They all prefer to paddle on the left side of the canoe. Exhaustion and sore muscles solve this predicament; switching sides being the key.  A beaver dam provides an obstacle which almost stops the voyage until bear's suggestion, the third suggestion, works.

An enjoyable ride is short-lived when their raised voices, quibbling about every little thing (and beaver's hunger) covers the sound of their approach to the biggest difficulty yet, white-water rapids.  Tumbling, tossing, in and out of the swirling, dangerous descent into doom, the terrified trio finally manage to land on a rock with their canoe intact.  As darkness falls, they are still discussing, with less and less civility, how to get out of this mess.

In the light of a new day, a decision is made.  It's not easy by any means but they've discovered the secret to success.  Destination reached, a nap, a meal, a moment of thankfulness and yet another wise determination is reached, one sure to cause a knowing smile from readers.


As this tale of adventure and mishap unfolds, the narrator simply states the facts, sentence by sentence.  This writing technique used by Nicholas Oldland sets the stage for the added character dialogue and illustrations which elevate the comical nature of the whole ordeal.  Each time bear, moose and beaver face a decision, Oldland discloses more about their characteristics through the storyline.  Here is a single example.

It's the illustrations created in Photoshop by Nicholas Oldland that will bring on the giggles.  When looking at the matching jacket and cover, the trio facing forward in the moving canoe, it's all I can do to contain my laughter.  The expression on the beaver's face with those over-sized teeth is priceless.  What you can't see, without opening up the jacket and cover, is the continuation of the picture with a small red bird doing a backstroke down the river.  The small red bird appears throughout the book as a constant witness and participant in this canoe trip gone wrong. (He even has his own teeny, tiny paddle on the last page.)

The title page and verso show a winding waterway through a few forest trees on a white background.  The pictures alternate between double-page spreads, full single page, edge-to-edge visuals, smaller pictures with lots of white space on an individual page and several vignettes across two pages.  It's the details, the enhancement of the text, which adds mirth to the mayhem; moose covering his eyes, bear's paddle in the water and beaver yelling AHHHHHHH!  as they go over the falls or when they cook lunch over an open fire, moose holds grass, bear holds a fish he caught with a pole and line and beaver is roasting a stick.

My favorite illustration is when they first run the rapids.  The canoe upends three times in the air, with each holding on (or not) at different angles.  It ends with the bear sitting upright, paddle in paw with the canoe upside down, and moose and beaver riding the underside like a surfboard.


First and foremost, Up The Creek written and illustrated by Nicholas Oldland is a delightful day gone wrong solely due to the inability of the friends to cooperate.  Fortunately for them, this is resolved but not before readers have been treated to a first-class humorous escapade.  This is one of those books that would be loads of fun as a reader's theater with a minimum number of props or as a puppet show.