Has the silent solitude of your life vanished?  Do your most prized possessions frequently get moved around or disappear?  Are your nighttime dreams constantly disturbed?  Are you usually blamed for happenings in which you had no part?  If you answered yes to these questions, it appears you are being haunted and taunted by a downright, annoying younger brother or sister. 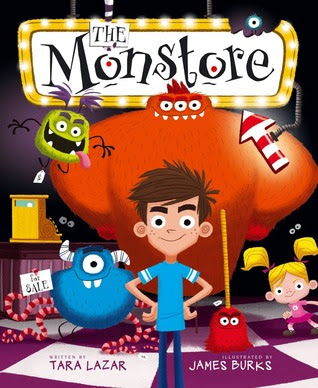 As you will have duly noted by now, it does no good to point out the lack of fairness in any of these situations to your parents.  This state of affairs calls for drastic, clandestine action.  You need to read The Monstore (Aladdin, an imprint of Simon & Schuster Children's Publishing Division) by debut author, Tara Lazar with illustrations by James Burks.

At the back of Frankensweet's Candy Shoppe, under the last box of sour gum balls, there's a trapdoor.

This is no normal trapdoor...oh no, sirree.  Entrance is only granted after the exchange of a secret code and certain sweet treats.  You are now in a shop like none other; a shop filled with fabulous, handy dandy monsters.

With little sister, Gracie, pushing Zack to his wit's end, it's time to make a purchase.  Manfred should scare her silly, ending her prying and spying.  Well, that backfires royally.  To Zack's dismay the manager of The Monstore informs him there are no returns, no exchanges.

Maybe another monster will be the ticket to success.  Mookie is sent out into the sleeping household so Zack can get an uninterrupted good night's rest.  Two monsters plus one energetic little girl put a quick end to that plan.

Back at the monster market, Manfred and Mookie in tow, the manager utters his standard reply to Zack's total frustration.  When the manager again recommends another freakish fiend, Zack decides to give Mojo a whirl.  But that girl, that irresistible (to the monsters), irritating (to Zack) bundle of female impishness, wins herself another friend.

This scenario happens so often, Zack's bedroom is a tad overcrowded, leaving him no choice but to head down to the basement.  Prepare to be amazed by the night's further revelations.  And, of course, there is the problem with what to do with all those monsters.


There's something rich and rare about the cadence created by the words Tara Lazar has selected to tell this story.  She cleverly captures the interplay of an older brother and his younger sister plus all the marvelous monsters who seem to delight in doing the exact opposite of their intended purpose.  Increasing the playfulness for readers is the repetitious reply of the manager and his rhyming suggestions.  The mix of narrative and dialogue is polished, flawless.


With a single glance, opening the matching jacket and cover, readers know they're about to enter into fiendish frolic; those wide eyes, goofy grins, lighted (and bitten) marquees and still more eyes peering out from the dark, say "come on in".  The first page done in eerie glowing greens in a shadowy room, a single arm outstretched holding the secret treat as the trapdoor raises, sets the stage for the next two-page spread; the store filled with monsters galore in all shapes, sizes and bright colors, all googly eyed.  The small, wiry manager, with balding head, tufts of hair sticking out, bushy eyebrows, sly toothy grin, dressed in vest and bow tie, is the ultimate image of trickster shopkeeper.

By alternating the size of the illustrations, the perspective and extending the elements beyond the frame, James Burks compliments and amplifies the narrative.  For example, in interpreting the text The kind that glow in the dark, he pictures a little girl reading under her blanket at night, stuffed animals sharing her space as a hairy purple monster's single, large, shining eye arches above her head.   Details accentuate the fun factor; the clock in Zack's bedroom, when all the racket wakes him up, shows it's 3:37 AM, Gracie's pigtails standing straight up on her head,  Zack in a welder's helmet with tongs getting rid of the scariest thing, and the bulging house with the monsters' antics in abundance.


Be prepared for requests of repeated readings of The Monstore written by Tara Lazar with pictures by James Burks.  It's absolutely golden when read aloud.  You also might want to stock up on bags of a particular wiggly, jiggly kind of snack, just in case someone you know is thinking of visiting a shop specializing in monsters.

This is a link to an earlier sketch James Burks did for the cover.  John Schumacher at Watch. Connect. Read. interviews Tara Lazar.  At Design of the Picture Book, Carter Higgins interviews both the author and the illustrator about this title.  Inkygirl the blog of Debbie Ridpath Ohi interviews Tara Lazar and James Burks about the process for creating this book.  At the publisher website are three activity sheets to use with this title.  Links embedded in the author and illustrator names above are to their official websites.  Update:  There is now a teacher's guide to accompany this title.
Posted by Xena's Mom at 8:14 AM