To Their Last Breath

Everyone fortunate to have a dog choose them knows about their keen sense of smell.  When they catch a whiff of something, it's not just a scent but an entire story.  If Xena sticks her nose in the air, looks around and does not seem to want to continue, we turn around.  The nose knows. 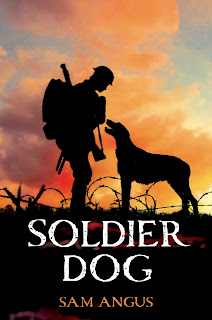 Another of their innate abilities is their sense of love, loyalty, to the leader of the pack--you.  If I become fearful, Xena is alert.  This was never more apparent than when we were attacked by a German Shepherd loose in a park; her change into wolf mode was uncanny. It is because of characteristics unique only to them, canines were used extensively during World War I along the Front; many as messenger dogs.  Debut author, Sam Angus, recreates a year during the war through the story of a fourteen-year-old boy in Soldier Dog (Feiwel and Friends).


Twelve hours had passed.  He'd last seen her at eight that morning.  Faint with exhaustion and hunger, Stanley sank down.  How on earth could he find a creature lighter and quieter than the wind?

Stanley did not find the purebred, prize female greyhound, Rocket.  She returns home the next morning. His father, Da, prone to violent rages since the death of his wife and the enlistment of his older son, Tom, in the Great War, vows to not allow half-breed pups on the premises.  Six weeks after their birth, when the one most attached to Stanley, Soldier, is not taken by the tinkers, Da states he will drown him.  Awakened by Rocket's howling the next morning, to Stanley's dismay and rage, Soldier is missing.

Unable to bear a life that has become intolerable, Stanley leaves to look for Tom in France.  From Lancashire to Liverpool, he travels to enlist.  Lying about his age, he survives basic training, moving through Signal School, a division of the Royal Engineers.  When a new section of the Signals Service is formed, Messenger Dog Service, Stanley signs up, becoming a Keeper, Keeper Ryder.

Unlike the other men who are given three dogs to train, Stanley receives only one, Bones, a Great Dane.  He's told only men with three dogs go to the front, only men with dogs who bond with their master working perfectly without question.  Week after week Stanley prepares Bones, gunfire, heavy guns, bombs, and homing runs, until Colonel Richardson has no choice but to send them to France.

When communication lines (wires) are broken by gunfire and shelling, when men, runners, and pigeons can no longer be used the messenger dogs are sent.  Warfare in the trenches along the Western Front is brutal but a dog trained to come back through the worst of it, out of loyalty, will do so.  Key people in his home life, Da, Tom, and his teacher, Lana Bird, who Tom loves, merge with the soldiers who are Stanley's new family. Letters from those he cares about most play as important a role as the messages sent from one company to another on the field by the dogs.

The month of April 1918 will change everything Stanley believes to be true; unbelievable horror, suffering, pain, loss and heroism will pass in and out of his world.  Key battles, lost or won, will depend on the messenger dog who loves Stanley and who Stanley loves.  Readers will be unable to turn the pages fast enough to discover the fate of all involved.


In a word, this story, written by Sam Angus, is intense.  Meticulous research, providing details, is woven into dialogue and descriptions of place and time in England and France.  A sensory writing style binds the reader intimately to the events and action within the narrative; it's as if we one and the same with Stanley.  Broken into three parts; before enlistment, during service and after the Battle of Villers-Bretonneux, chapter headings, sometimes only hours apart, contribute to the profound impact.  Here are several passages taken from an Advanced Reader's Edition (my only copy available).

The vast and bleak parade ground was surrounded by barracks, offices, and the entrance gates.  Fear kept drawing Stanley's eyes, like the needle of a compass, toward the gates.  Da might stomp through them at any minute, shouting for all to hear, "Fourteen! The daft twerp's only fourteen!"  Da would see the ill-fitting uniform, see the pants which billowed around his son's buttocks, see the puttee---the bandage-type stocking---that was in danger of unwinding at his right ankle, already unraveling at his knee.  Da would mock him and haul him home.

"The shelling's cut the lines, sir...There's no point, sir, they're blown to bits as soon as they're laid."
"Oh, God," breathed Hunter to the linesman, aghast and haggard.  "No signals and we can't lay new lines till nightfall.  We've only the runners and they haven't a chance---the Hun's taken the tunnel under the canal---they'd have to swim across."
Hunter raced back down to the Signal Station.  There were more shouts from below, unintelligible.  Fidget was shouting to Stanley that the front line had pulled back again, that it wasn't holding.  A man came up the stairs, white-faced, eyes full of fear, a fresh runner, with Hunter behind.  Hunter looked toward the canal and the sickle of flame that grew hourly closer.
Stanley looked at the face of the runner.  And he looked down at Bones, willing and ready.  Would he be wanted now? his round eyes seemed to ask.  Stanley saw, with a rush of love, the large square skull and wing-like ears, and he felt a lump rising in his throat.  Bones must go, a man should not be sent---the dog was faster, lower, had the better chance.
"No, sir.  Don't send a man. S-send my dog, sir."


Soldier Dog the debut work of author Sam Angus vividly brings to life the place of messenger dogs in service during World War I.  It is a story of incredible courage, both human and canine; heartbreaking and heartwarming, captivating and compelling, memorable to the final sentence.  For middle grade and up, this book has my highest recommendation. A historical note, author's note, photograph gallery and bibliography are found at the book's end.

Follow the link embedded in Sam Angus's name above to her official website.  The link embedded in the title contains more information about the book, the research, reviews and the first chapter.  Bobbie Pyron, author of The Ring, A Dog's Way Home and The Dogs of Winter, interviews Sam Angus here.
Posted by Xena's Mom at 9:05 AM