You don't have to be a member of a band, orchestra or choir to have music be a part of your life.  Music surrounds us everyday; there are rhythms in our world whether we live in a city or the country.  Music marks moments in our lives; hearing a song can recall a time period or exact event.  Music can match or change a mood. 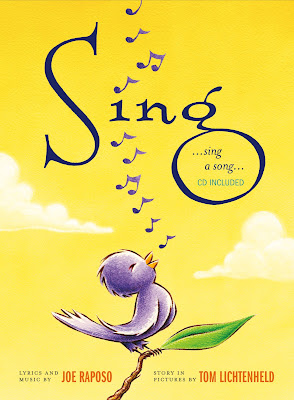 Some melodies are catchy enough, they may stick with us for days or even weeks.  During his time as musical director for Sesame Street, Joe Raposo wrote the words and music for a song which has and will continue to endure for decades and decades to come, Sing.  Sing is a tune known by people all around the world, sung in many languages thanks to Joe Raposo.  It has now been pictured with a story by author/illustrator, Tom Lichtenheld, Sing (Christy Ottaviano Books, Henry Holt And Company).

As if the lyrics and melody are not cheerful enough, Tom Lichtenheld illuminates them with his sunny complimentary colors beginning with the captivating cover, a small purple bird on the golden background, head and beak raised in song.  Beneath the jacket the darker purple from the bird clothes the cover, the bird and notes embossed in a darker shade.  Opening and closing endpapers (with jacket flaps aligned) illustrate the closing notes in a wave with the words beneath.

The two pages showcasing the title feature a landscape with a line of trees, a close-up of a single leafy branch with three charming little birds, one a darker hue of the sky, another a rusty brown and the third, the purple bird.  With a turn of page the first sings a single note of blue and flies from the nest.  On the following two pages the second sings his own note and takes wing.  But on the third set of two pages, no note comes from the purple bird, not a single sound despite his trying.

With each attempt he gives it his all, to no avail.  He hangs his head in sadness, alone in the nest.  But wait...a boy with a guitar comes strolling along, sitting on a rock under the tree branch.  The words and notes of Sing float upward as he strums the strings and gives voice to the song.

The notes focus on a straight path, building beneath the nest.  With each line of the tune, there are more and more, elevating the bird in the nest.  As the lyrics of the song speak of goodness and happiness, the magic found in music happens.


Tom Lichtenheld using ink, watercolor, pastels and colored pencil has created a story which highlights the soul of the song.  His pictures are paced perfectly with the words.  In the characters of the three birds and boy with his guitar, the exhilaration, their complete zest for singing is evident in their features.  You can't help but feel laughter bubbling up and singing happily along with them.

Liberal use of white space directs the reader's eye to the soft washes around the tree branch first, then to the boy singing.  It also serves to shift emphasis to the notes.  When the purple bird flies into the sky dotted with soft clouds, the colors reflect those on the title page, until he joins his nest mates.  A colorful joy drifts into the white, then the soft blue; three birds on a wire, singing from their hearts.  Sing a song!


It is impossible to read Sing lyrics and music by Joe Raposo, story in pictures by Tom Lichtenheld without humming along or bursting into song.  You will feel your heart fill with joy as the little purple bird finds his voice.  The words in English and Spanish appear at the end.  In any language it's beautiful.  The final two pages contain a note from Nick Raposo, Joe's son, a picture of the original handwritten lyrics and chords by Joe Raposa, and dedications from Nick Raposo and Tom Lichtenheld which are uplifting themselves.

Here is a link to the publisher website for a peek at more illustrations.  Tom Lichtenheld provides an activity guide linked here.  This wonderful essay appeared at Seven Impossible Things Before Breakfast nearly a month ago with Tom Lichtenheld speaking about his process in creating the story for this song.  It's loaded with artwork.

And I've included several videos.  If there is any tune I want rolling around in my mind it is this one.