A Dog, A Dinosaur and a Boy's Love

On the wall in my home is a signed print by the late artist and author, Stephen Huneck.  Huneck is best known in the children's literature community for his series of Sally, a black Labrador, books. My print is of the front paws, head, chest and winged back of a yellow Labrador, nose pointed upward toward a single shining star, the laces of a dangling shoe, in his/her mouth.  The print is captioned, Dogs Have A Soul. 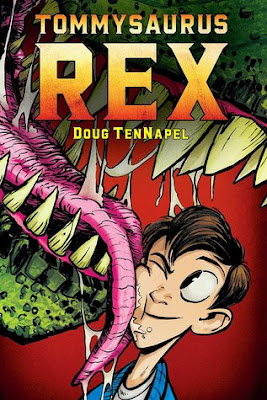 If you've ever loved and lost a dog, the need to believe this, for this to be true, is very strong.  When children grow up with a puppy, there is something extraordinary about the bond formed between them and their dog.  It's as if they are the other half of one another.  Author/ artist Doug TenNapel, whose graphic novels, Ghostopolis, Bad Island and Cardboard, are extremely popular with readers, has a recently released, newer version of the title, Tommysaurus Rex (Graphix, an imprint of Scholastic) filled with king-size heart about the remarkable connection between a boy and his canine....er....prehistoric companion.

Ely, an only child, living with his parents in suburbia has grown up with a golden retriever named Tommy.  We are introduced to the characters around the breakfast table as Ely is getting ready to take Tommy for a walk to the park.  On the way to meeting his friends with their dogs, tragedy strikes.  Another dog gets away from their human, chasing Tommy out into the street where he is struck and killed by a car.

Absolutely heartbroken, Ely is comforted by his Dad that evening with the suggestion he go stay with his grandpa, helping him on the farm.  Upon arrival at the farm, amid the greetings, Ely receives the gift of a toy Tyrannosaurus Rex from his grandpa. All goes grandly, as is often the case between grandparents and their grandchildren.

The next day after hours of hard work, Ely takes a break walking around the area with his new, smaller plastic companion.  A local boy, Randy and his two buddies Shem and Beckett approach Ely.  Their intentions, however, are not friendly.

Ely takes off with them in hot pursuit running through the woods trying to hide in a cave.  Caught off guard by strange sounds within the dark cavern, he is nabbed and bullied by the three, losing his grandpa's gift too.  That night neither Randy or Ely can sleep; Randy is filled with anxiety over the absence of his father and Ely hears those same noises, heard earlier, louder and closer, coming from the darkness outside.  Who or what is out there?

Making his way through the night back to the cave, Ely frees a trapped, full-grown Tyrannosaurus Rex.  The friendship between the duo is immediate.  Of course, there is the slight problem of his size, appetite, friendship with a local black cat and fear of fire.

It's up to Ely, Grandpa and Rex to prove to the mayor of the community that he's an asset rather than a liability.  While their determination to succeed seems to be working, Randy is equally driven to make life as miserable for Ely and Rex as possible.  When Randy's efforts roar out of control, Ely's decision alters everything...except for the love he shares with Tommysaurus Rex.


Told entirely in dialogue, visual and sound effects, Doug TenNapel creates a story poignant in its sadness and happiness alike; breaking your heart and fixing it more than once. His placement of humor (and dino poop) are spot-on.  His characters are fully human; flawed but rising to the occasion when they need to be better than they think they can be.  Here is an example:

The newly acquired Rex has just eaten a cow.

Ely: COOOOL!
Grandpa: A dinosaur is eating my cow.
Ely: They do that.
Grandpa: Mmm...so they do.
Ely: His name is Rex.
Grandpa: Ely, that's a Tyrannosaurus Rex! You can't keep him.
Ely: Oh, come on, Gramps! He's gonna be my best and only friend.
Ely: PUH--LEAAAASE!
Grandpa: And don't try to give me "Weepy Eyes"! I've got my Weepy-Eye Shields up!
Ely: Aw, come on, Grandpa! We get a T-Rex dropped in our lap and you wanna get rid of it!
What kind of man doesn't dream of owning a T-Rex?
Grandpa: You've got a point there.
Ely: Look at him go! He finished all of the bowels in thirty seconds!


In perfect sync with the dialogue the graphics accentuate the emotional heartbeart of the story.  Alternating between framed panels, single page and double page illustrations and shifting perspective they captivate the reader, pulling them into the center of the action.  Numerous times the humor is unspoken but obvious.  Some of my favorites are: the series of pages when Ely first encounters Rex foreshadowing events to come, the three panels when Ely throws a stick saying fetch and Rex brings back the local policeman dangling from his motorcycle, when Ely's dad comes to his room to comfort him, lying down on the floor next to him and the uplifting final two pages.


Having read Tommysaurus by Doug TenNapel twice cover to cover and other sections a third and fourth time, I can say, in complete honesty, this graphic novel is a great read.  It is first and foremost a story of the love a boy has for his dog and in turn of the dog's love for his boy.  But, many other life challenges are raised within this story, the why of bullying, remorse, forgiveness and death.  Plan on multiple copies.