When you least expect it, there they are.  In the middle of a neighborhood game of hide and seek, during a late night stroll or when you are coming in off the lake after a fishing adventure, the cooling summer air in all directions will be filled with the tiniest lights flashing off and on. Those beetles with bodies that glow have taken flight. 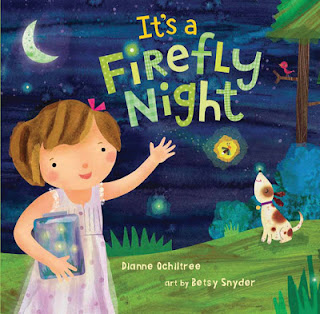 Whether standing still among them or moving about to hold one for a moment; no matter how many times you've seen them, the wonder never ends.  Summon your memories of summers' past.  Author Dianne Ochiltree and illustrator Betsy Snyder have combined their talents to capture the magic of a single evening in It's A Firefly Night (Blue Apple Books).


When the moon is high
and the stars are bright,
Daddy tells me,
"It's a firefly night!"

Yes, she can see them all around her house, filling her yard with lightning gleams.  Joyfully jumping off the porch, now placing them in her jar, she still notices the warm air and gentle grass on her bare feet.

The container, a pulsing lamp, is a gathering spot, a layover, for the nighttime creatures.  She counts their numbers up to five, running to show her Daddy her temporary treasure.  Later, she places the jar on the ground, carefully holding one bug in her hand before she sends it flying away.

As each takes wing, she again counts their numbers, backward from ten, watching as they pass over familiar landmarks.  Marveling at their movement and light, she wonders.  Hand in hand as she and her Daddy walk back home, she asks the one question such an enchanted encounter inspires.


With eleven four-line verses, the second and fourth line rhyming, Dianne Ochiltree wraps readers in the warmth of this summer adventure.  Lilting words form a sensory luster all their own; shimmer, glimmer, sparkle, and shine. Metaphor and alliteration add to the melodious mood.


A double page illustration of the little girl and her little dog, enjoying their firefly fun stretches across the matching jacket and cover; the front and back jacket having a special addition, a raised glitter detail on eight spots.  Opening and closing endpapers continue the nightscape with the starry sky, lightning bugs, a grassy hill, evergreens and bushes.  The rich color palette seen on the jacket and cover is continued throughout the title in a series of lush, luminous two page visuals.

A cheerful variety of textures is used on all the items in each of the pictures; the marbleized moon, the scalloped roof, the lacy overlay on the girl's nightgown, her Daddy's checkered shirt and slippers, and the patterned fireflies' bodies and wings. In an email message received from Snyder she indicates I typically create my art by hand-painting textures, scanning them in, and collaging them on the computer using Photoshop. I use a mix of materials—acrylics, watercolor, pastels, gouache, etc.
The intricate details delight; the fireflies on the dog's nose and tail, the little red bird who follows their walk, the owl, skunk and fox in the opening view of the neighborhood, the caterpillar chewing a leaf, the smiles on the firefly faces or the spiderweb on her swing set. Betsy Snyder further elevates the elated feeling of the story by altering views; the first three illustrations zoom in closer and closer to the girl and her dog as they gather in the fireflies, in another readers look down on the girl as she gazes upward and in one the focus shifts to her outstretched hand, a lightning bug on a fingertip.

It is nearly impossible to pick out a favorite illustration but the close-up of the flowers and grasses with the caterpillar and ladybugs among them, surrounding the jar filled with five fireflies, showing only the girl's hands, seems to represent the the special moments of the entire evening.  Of course, the final two pages showing her and her Daddy walking along a path toward their house, the pup scampering ahead, the night alight with stars and fireflies, is a gem too.

It's A Firefly Night written by Dianne Ochiltree with art by Betsy Snyder is a light-hearted, absolutely charming, poetic portrait of a daughter and her father enjoying one of summer's precious pleasures.

After the story nine facts about fireflies are found in glowing orbs set in a night sky among the lightning bugs and stars.  Follow the links embedded in the author and illustrator names to their official websites.  This link is to the publisher website where several two-page spreads are available for viewing.
Posted by Xena's Mom at 7:58 AM