Have you ever noticed how some grazing animals will stick their heads through a fence to eat on the other side, believing it to be better even though the food is exactly the same?  While the phrase "the grass is always greener on the other side of the fence" may not hold true in most instances, out of necessity animals and people have throughout time moved to better their circumstances or as a means of survival.  The struggle associated with this endeavor has found its way into folklore. 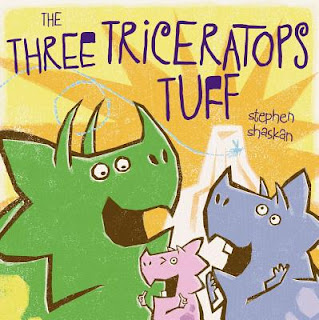 Out of the storytelling tradition in Norway comes a fairy tale of three goats, hoping to eat grass on the other side of a bridge.  The problem is the ugly troll beneath the bridge, who would like nothing better than to have them for dinner.  With a twist and a trip to the past author/illustrator Stephen Shaskan offers readers, The Three Triceratops Tuff (Beach Lane Books, an imprint of Simon & Schuster Children's Publishing Division, April 2, 2013).

Once upon a time,
sixty-eight million years ago,
there lived three triceratops brothers
who went by the name of Tuff:
Stanley Tuff, Rufus Tuff, and Bob Tuff.

Hard times have fallen on the area dinosaurs; food is becoming scarce.  After a bit of a trek, the lure of fresh green goodness on the other side of a valley gets the trio's attention.  Dino two, Rufus, is more than ready to dig into the waiting feast.  Therein lies the problem; Bob, the biggest of the three, points to a nasty, rather large Tyrannosaurus Rex waiting at the bottom.

Little Stanley Tuff with the blissful energy of youth does not want to wait.  He is stopped in his tracks by the looming, sharp-toothed giant, hoping to make Stanley an entree.  The T. Rex nevertheless takes the frightened but quick-thinking dino's advice to wait for the next bigger, and thus better, Tuff to come along the path.

Getting ready for his first gourmet gulp, Tyrannosaurus Rex is halted by Bob's suggestion of a better idea.  The farthest thing from the villain's mind, though, is an aerial view of the valley.  Herbivores triumph!


With the first line Stephen Shaskan takes readers into the world of the triceratops three; making it perfectly clear these dudes may be old, really, really old, but this story is going to have a fresh, funny edge.  His word choices, turn of phrase and repetitive lines are more contemporary, in contrast to the characters and setting, heightening, what I like to call, the laughter factor.  Vegetation is appropriately called grub, T. Rex tells Stanley, "Then scram squirt!", T. Rex says "Dinner is served..." before attempting to consume the dinosaur brothers, and more than one character says "not so fast".


Using the same artistic technique as in his debut picture book, A Dog Is A Dog, Shaskan digitally renders illustrations closely resembling those done by block printing.  Opening the matching jacket and cover, readers are greeted by the grinning threesome, sunbursts and volcano in the background on the right and the fearsome, growling carnivore on the left surrounded by all the vibrant, leafy, lime green plants.  On the first of two title pages we see a teeny, tiny fifth character zooming around the words in a sky blue circle---a sky blue mosquito.  He loops across the next two page spread calling attention to the publishing information as the triceratops trudge beneath the title and author/illustrator name.

Alternating textures, wood grain and sponge-like, and colors, shades of green and the sky blue, the scenery showcases the vivid colors of the dinosaurs.  Heavy lines around each further focus the reader's attention on the four.  Goofy grins, furrowed brows, angry eyes and hungry snarls along with expressive hand gestures leave no doubt in readers' minds as to the state of affairs on every page.

In the distance on several of the pages we see silhouettes of a line of other dinosaurs.  In a cheerful, vibrantly colored ending, Shaskan brings everyone together.  The final design technique has the mosquito again circling... the volcano... amid the dedication and more detailed publication information.


The Three Triceratops Tuff is a playful fracturing of a tale plus a little bit more.  There is exhilarating determination on every page.  What's not to love about three dinosaurs named Stanley, Rufus and Bob!? This is one you might want to consider for a reader's theater in a folktale study along with a more traditional version.

A link to Stephen Shaskan's website is embedded in his name above.  On another page linked here, he discusses how the idea for this book came to him through three four-year-old boys.  In his kids' stuff section he has headbands of the trio to cut out and color plus a printable maze.  This link to the publisher website shows a couple of interior illustrations.  Recently updated:  Stephen now has templates for creating paper bag puppets at his link.