The Only Place On Earth....

Even though the third month in this new year is winding down,  I still have many books published in 2012 which I will not leave unread.  In December 2012 a title appeared on the Nerdy Book Club Award Nominees list which began receiving starred reviews as early as July despite a September publication; four starred reviews in total.  When the National Science Teachers Association released their Outstanding Science Trade Books for Students K-12: 2013 (Books published in 2012), this title was on the list. 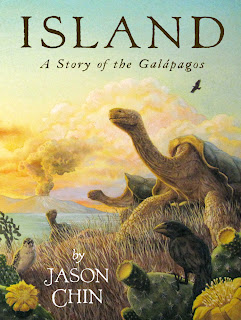 This book takes readers to one of the most unusual places on the planet.  Many of those animals calling it home are found no where else.  Fascinating, factual and filled with gorgeous paintings, Island: A Story of the Galapagos (Roaring Brook Press, A Neal Porter Book) written and illustrated by Jason Chin, is more than worthy of every ounce of praise and recognition.

The sun is rising over a lonely group of islands more than six hundred miles away from the nearest continent. The air is still and the sea is calm, but beneath the water something is stirring.

With that opening we follow an island through four stages of life.  Six million years ago through a series of volcanic eruptions it is born and grows layer by layer.  Eventually, through the course of nature, a seed becomes a tree, a bird lands and stays and marine iguanas swim from a older island to the newborn.

Though the length of time is hard to imagine one million years pass; the island is in its childhood phase.    Teeming with life the land and waters surrounding it create a unique ecosystem.  Another million years passes with the island developing different climate zones due to varying elevations.

As the island grows into adulthood other islands have been born; larger islands.  Due to the specific water and land conditions creatures normally found in other parts of the globe migrate and take up residence; birds, sea lions and tortoises.  For the sake of survival their original physical characteristics over a period of years shift to match this island's environment.

Five million years have brought numerous changes to the land and its inhabitants.  Due to its shrinking size and flattening some have left; others still call it home.  One day the waters advance; the island sinks from sight.  Six million years have now passed.

Though this land mass is no longer visible, others in the group still exist to be discovered, explored and have the abundant and singular life documented.  A ship, the HMS Beagle, arrives in 1835 carrying a passenger who will change the world's thinking.  Charles Darwin is that passenger.


In his author's note Chin states:

This story is based on science, but brought to life through my imagination, and I hope that it will excite and inspire readers just as the remarkable islands of the Galapagos have excited and inspired me.

Naming four authorities in the field who assisted in his research gives Chin a sound basis upon which to build his narrative.  Very few, if any, of the students I know or have known will ever have the opportunity to visit the Galapagos.

But with this accessible, informative text they can, as I have several times, not only make the trip but be inspired by this beautiful place.  The technique of assigning biographical divisions to the life of the island is an open invitation to explore its amazing adaptive changes.  The delivery of the details, the spacing of the various progressions, attracts and maintains interest.


The majesty and mystery of the Galapagos Islands captivates readers immediately with the double page spread across the jacket and cover displaying the varied flora and fauna.  The warm natural hues of greens, blues, browns and golds seen here are replaced with the cooler but still stunning blues, greens, whites, and grays found on the land and sea of the island during its lifespan.  The opening endpapers done in shades of golden brown feature framed portraits of thirty-six species of The Galapagos.  Using the same colors a close-up map of the islands plus an inset showing its position relative to South America is shown on the closing endpapers.

Jason Chin has painted all of the illustrations.  His one and two page visuals bleed to the page edges, drawing in the reader.  White space frames a series of smaller illustrations on alternate pages when he chooses to showcase the passage of time, the arrival  of animal populations and their growth or changes in their physical characteristics.  Layout and design combine to create a pictorially pleasing flow of events.  His final two page spread is breathtaking.


In a word, marvelous best sums up Island: A Story of the Galapagos by Jason Chin.  As to his goal of generating excitement for this beautiful place, I say mission accomplished and then some.  With the same care found in his narrative and paintings he includes a page each about Charles Darwin and the Galapagos, The Galapagos Islands and Endemic Species of the Galapagos.

This valuable volume peaked my interest to the point where I created a new Lino which includes links to his website, the publisher page with extra illustrations, a video and a nice assortment of web pages with information and lessons.