It's there.  Every single time you open the cover of a book, whether it's new or you're revisiting a favorite.  You may not even be aware of it's presence.   Then again, anticipation, for a few moments may be flowing in your veins instead of blood; you can feel it so strongly. 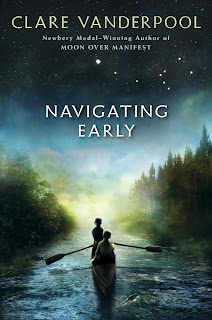 The hope one experiences in beginning a book by a known author, a preferred genre or in a title already receiving accolades from professional reviewers, is for a lover of books like receiving the greatest of gifts.  If an author decides to heighten this sense of wonder with an enticing beginning word, sentence or paragraph, we readers know a treasure is being offered.  In her second title, Navigating Early, Clare Vanderpool, winner of the 2011 Newbery Medal for Moon Over Manifest, sets the stage for what will be an unforgettable, life-affirming and life-changing adventure with a paragraph on the first page plucked from within the book itself.

The great black bear, awesome as Ursa Major, wagged her head from side to side, and her bellow shook the nearby passage of the Appalachian Trail. ...

It's not the end of World War II that brings Jack Baker's dad, a captain in the Navy home, but his mother's sudden death.  In true shipshape fashion he removes all evidence of Jack's mom's life in their home.  He then takes Jack away from all he knows in Kansas, placing him in a boarding school in Maine along the ocean.

What neither Jack nor his dad could have foreseen is the strange boy, living and attending Morton Hill Academy, Early Auden.  Early needs quiet so he lives in custodial quarters in the basement.  He plays specific musical records on certain days, lines up rows of colored jelly beans when he's upset, believes his brother killed in action overseas is alive, is obsessed with the mathematical constant pi (even using the numbers to create a story of a man named Pi), knows there are still timber rattlesnakes in Maine and is on a quest to track down the largest black bear on record on the Appalachian Trail... and to find the lost Pi of his story.

Both Jack and Early are left alone on the campus during a fall break (not intentionally).  Rather than allow Early to set off down the Kennebec River alone, the two having developed a tenuous friendship, Jack agrees to what he considers a crazy scheme.  Jack cannot see this journey with the same eyes as Early; numbers as story not simply as mathematics.

"...For me, they are purple and sand and ocean and rough and smooth and loud and whispering, all at the same time." He paused for breath.
I wished I could see what he saw---color and landscape, texture and voice.

Before long the fictional story of Pi parallels the real story of Jack and Early.  Encounters with pirates, a volcano, a whale, the Ancient One and wandering in the Catacombs like separate balls of yarn are knit together to form heart-pounding suspense.  Loss and fate woven into the pattern like strong, fine golden threads deliver a conclusion, stunning and ultimately satisfying.

Clare Vanderpool's writing immediately draws the reader into the story with her characterizations.  Through dialogue and point of view we are intimately aware of the personalities of the primary and secondary characters; identifying with their wants and needs.  The technique of inserting several pages, chapters, of Early's Pi story within the narrative further invests readers in the boys' endeavors. We are also keenly conscious of the surroundings in which Vanderpool's characters are placed through her descriptions; the Appalachian Trail, the Morton Hill Academy.  Her skill, needles in hand, at fashioning all the threads into an astonishing whole at the end, is the work of a master.  Here are a couple of excerpts from the book.

My mother was like sand. The kind that warms you on a beach when you come shivering out of the cold water.  The kind that clings to your body, leaving its impression on your skin to remind you where you've been and where you've come from.  The kind you keep finding in your shoes and your pockets long after you've left the beach.

Early and I stared at this ghost of a camp, looking for any signs of life, half-dead or otherwise.
"This has to be it," said Early. "This is just the way it's described in the numbers.  They have to be here. The lost souls."
"There's nobody here, Early.  Just look at this place.  This must have been abandoned years ago.  Maybe they moved the camp farther north, where there are more trees."
But just as I was saying this, there was a noise inside one of the shacks. A soft plink, plink, plinking sound, as if some ghostly person were stirring a metal spoon in a pot.

Please follow the link to Clare Vanderpool's official website embedded in her name above.  Clare Vanderpool was also a guest writer at the Nerdy Book Club this year.  Below the publisher offers fifty plus pages of the book for your enjoyment.
Posted by Xena's Mom at 6:26 AM