You'd never know it from looking out the window but yesterday, March 20, 2013 was the official first day of spring.  In the past forty-eight hours we went from a winter weather advisory to a winter storm warning to a lake effect snow advisory.  Due to the gusty breezes off Lake Michigan our wind chills have been in the single digits and the foot deep snow drifts are commonplace again. 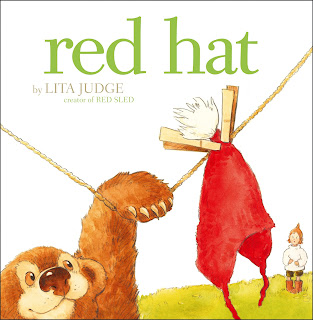 At times like this the best thing to do is build a roaring fire in the fireplace, drink hot chocolate and read a cheerful, new book release featuring green grass, trees with leaves, yellow butterflies and forest youngsters.  With the same gift for portraying animal antics as she did in Red Sled (Atheneum Books for Young Readers, November 2011)(reviewed here) Lita Judge's new title Red Hat (Atheneum Books for Young Readers) takes us to the familiar setting in a new season.  Curiosity and opportunity converge creating another wild romp.


As soon as the front cover is opened we are greeted with the title page picturing the child clad in a red hat running across a meadow, yellow flower in hand, the small brown cottage in the background, as four rabbits watch from the lower corner.  On the next two pages we see a wash tub has been placed on the grass in front of the cottage; the child washing the hat.  Three baby rabbits and their mother scamper closer for a look.

On a line stretched between a pine and birch tree the now clean hat hangs, rabbits jumping beneath as a baby bear and mother bear approach.  Temptation being too great, the younger bear snags the hat from its perch galloping away in delight.  With the flash and dash other animals join the chase, a porcupine and raccoon.  Of the two with a squint and reach, the bandit grabs the tasseled end.

Now the hat has switched to another wearer only this time it's started to unravel, what with all the tugging and pulling.  With vocal glee, Yoo-ha!, a tiny mouse grabs on for the ride of his life.  His wide-eyed wonder turns to worry the run escalating, whipping him around trees, as another flop-eared friend grips on for the trip, too.

What's that?  Possession has been reclaimed by the bear as he heads over a hill.  Then...all the frivolity comes to a screeching halt.  Where once there was a hat, red yarn is strung about clothespins.  With a Tink-a-tink tink a pleasing conclusion is fashioned for more than one.


Using only a minimum of words, onomatopoeic sounds or brief exclamations, Lita Judge's illustrations tell her story.  Rendered in pencil and watercolor there is an undercurrent of barely concealed mirth evident on all the pages.  A glowing warmth shines from the abundance of green, the hues of browns, the white, the yellow and splashes of red.  You can almost feel the sun on your face.

The animation on each of the characters' faces is brimming with expression; glee, curiosity, exuberance, satisfaction, concern, guilt and nonchalance.  Judge alternates the view for her readers;  closing in to show just the paws pulling the hat from the clothesline or the mouse grabbing the yarn but then pulling back to show all of the animals running with or holding on to the hat.  The tiniest of details add to the laughter readers will not be able to contain when reading; the mouse grasping the porcupine's quill after his fall or a rabbit's ears tied in a knot.

Each of the two page spreads throughout is framed with a pencil line, then a larger white border.  To show movement characters or the yarn will break out of the frame into the white space.  My favorite illustration is when the critters crazy caper is stopped and we readers are looking at their upturned faces.

Red Hat written and illustrated by Lita Judge is pure, perfect fun from beginning to end.  It's as if she has happiness stored in a bottle sprinkling it over her pages so when readers open the book it wraps around us.  It doesn't get any better than that.

Follow the link embedded in Lita Judge's name above to view her official website.  She has many pictures from this book there for your enjoyment plus she has a red hat contest.  Select Seven Impossible Things Before Breakfast to read her interview.  Enjoy this video chat with Lita Judge and book trailer for Red Hat.