Over the years, living near lakes, seas or oceans, enjoying recreational boating or making a living in fishing or transportation, one tends to develop a healthy respect for the combination of these bodies of water and the weather.  When a storm strikes, whether you are an observer or unwilling participant, the wind and waves are a beautiful, powerful and sometimes...deadly force.  There is nothing more terrifying than being aboard a vessel at the mercy of elements beyond the control of those in charge. 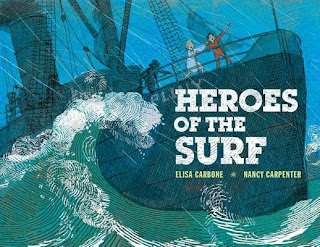 A continuous fascination with students for titles about shipwrecks especially the Titanic never seems to diminish.  Running a close second to those books are titles focusing on daring rescues made during the height of Nature's fury.  Author Elisa Carbone has selected one such true event for her new historical fiction, Heroes of the Surf: A rescue story based on true events (Viking, May 2012) illustrated by Nancy Carpenter.

May 13, 1882
Our steamship, Pliny, left Brazil three weeks ago on April 22---I know because I wrote it in my pirate logbook.

So begins the story of the voyage fated for peril prior to completion.  Our narrator, young Anthony, goes on to state that Captain Mitchell has informed him the ship is close to 300 feet long weighing over 1,000 tons.  Manned by thirty-six crew she carries passengers, men, women and children, numbering twenty-five.

Anthony and his friend Pedro have occupied themselves during this trip pretending to be pirates.  This evening their play is interrupted as they are ordered below by the captain, skies darkening with storm clouds.  The two are spending the night together with Pedro's father in his cabin as the craft rides up and down the steep waves.

Sometime later cries of Breakers! Breakers ahead! awaken Anthony.  He and Pedro make their way to the deck to find the seaman working feverishly to keep the boat on course.  Suddenly with a loud noise and a earth-shaking shudder the ship is stuck on a shoal.

Lifeboats are shattered by the waves before anyone can climb aboard them.  The inky swirling sky is momentarily lighted with a signal for help.  Then in the light of the approaching dawn Anthony and Pedro see land and a cannon---pirates?

Within several heartbeats a resounding BOOM! fills the air.  A weight and rope fly overhead followed by a life preserver with attached shorts.  One by one the passengers are pulled shoreward across and over the stormy waters by the members of the United States Life-Saving Service.


The details of research used by Elisa Carbone within the narrative create a sense of authenticity. Intensifying the events of this date is her use of dialog by the narrator and other members aboard the Pliny.  Word choices, nautical terms and phrases filled with action, make this a completely engrossing read from cover to cover; readers feeling as if they are shipboard themselves.  Here is an excerpt from the book.

From the forecastle deck a rocket shoots into the air, red with fire.
"The captain is signaling for help," says Pedro.  His teeth are
chattering with cold and fear.
Then, over the pounding of the waves, over the howling of
the wind, over the shouts of the sailors and the wailing of the
children, I hear it:  the silence.


The front and back (vignette of surfmen on shore pulling the survivors toward them) jacket and cover illustrations lure readers to the story with the promise of action.  As Carbone did with the text, Nancy Carpenter portrays the steamship, clothing of crew, passengers and rescuers exactly as it would have been in 1882.  She varies the size of her pictures, accommodating the text, extending them to the page edges.

Although her palette is full color, during the storm the darker shades of blues, grays, browns and blacks  take precedence.  The fine lines seen on the front jacket and cover, are used throughout the book (especially in the sea scenes) causing the reader to feel as if they are looking at old historical photographs.  At different points in the story the characters' facial expressions clearly capture the emotional mood of the moment.  One of my favorite two page spreads is a close-up of Anthony and Pedro on deck pointing toward the land believing real pirates are about to attack the floundering steamship.


Facts adeptly blended with fiction coupled with lively, realistic artwork based upon the wreck of the steamship Pliny in 1882 makes Heroes of the Surf by Elisa Carbone with illustrations by Nancy Carpenter a gripping story.  I venture to guess whether read one on one or with a group listeners, all will be collectively leaning in until the final page is turned, then releasing a sigh of relief.  In an afterword Carbone explains the facts versus the story in this title.  Please visit Elisa Carbone's official website by following the link embedded in her name.  I believe this would be a great title to pair with the lengthier book also based upon a true story, The Wreck of the Ethie by Hilary Hyland with pictures by Paul Bachem.
Posted by Xena's Mom at 8:07 AM