Within days of Superstorm Sandy striking the Atlantic coast on October 29, 2012, in what has gone down in the history books as the lowest barometric reading ever recorded for an Atlantic storm making landfall north of Cape Hatteras, North Carolina, super author Kate Messner put into action an enormous relief effort, Kid-Lit Cares.  She gathered in authors, illustrators, agents and editors, all part of the children's literature community, to create an online talent auction.  In the first round of the auction 41 people offered their very best.

An article about the auction quickly appeared in the School Library Journal on November 2, 2012. For the second round super author, Joanne Levy headed up the organization of another 81 auction possibilities.   Follow up articles were posted in Publishers Weekly on November 15, 2012 and December 4, 2012.  All total more than $60,000. was donated to the American Red Cross as a result of Kid-Lit Cares. 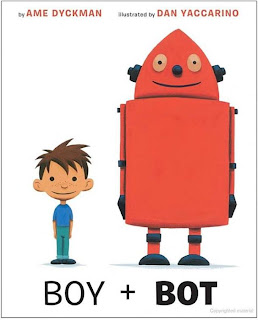 Word spread like wildfire on Twitter about Kid-Lit Cares.  Bidding was fast, furious and tricky.  What these people were offering to the highest bidder was nothing short of amazing.  When I saw #11, Skype Visit with Author Ame Dyckman,  listed in the second round I was determined to win.  This past summer I had read and reviewed her debut title, Boy + Bot, loving this delightful story of friendship.  The winning bid included:  a signed copy of Boy + Bot, a classroom Skype visit, Boy + Bot swag for the students and the students could choose what color Ame's hair would be on the day of the Skype.

The good news is I won!  The even better news arrived when I received my first email from Ame Dyckman.  I had also won a signed copy of Boy + Bot for myself.

The swag included bookmarks and stickers for the entire student body; plus bracelets for the Skype class.  It still gets better.  Ame signed a copy of her book for each of the four first grade classrooms, autographed with the teachers' names,  Mrs. Carey, Mrs. Mailloux, Mrs. Sterrett and Mrs. Wood.  Her graciousness continued when she did a separate Skype visit with each of them. 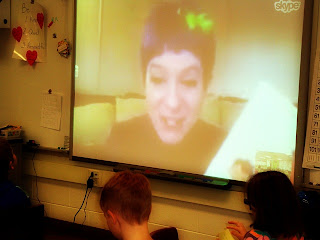 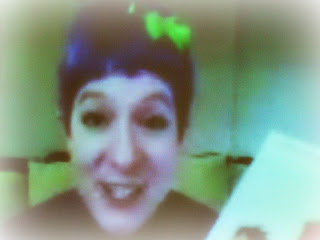 Over the course of several email exchanges plus about twenty DM messages on Twitter we finally had our four dates: February 21st, 22nd, 26th and 28th.  Thankfully we are in the same time zone. (I tend to have trouble with time zones.)  We were all so excited to see Ame with blue hair; the top vote of the students. (When I say blue hair, I mean electric blue.)

During those four Skype visits I have never been happier to see students so actively engaged with an author; their excitement was only exceeded by her sheer joy and enthusiasm.  From the second the connection was made until the final goodbyes were spoken, Ame Dyckman filled the room with conversation and information about her work and herself.  No question went unanswered. 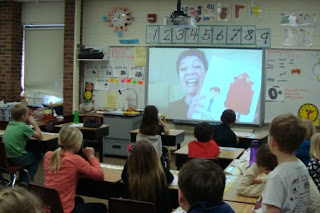 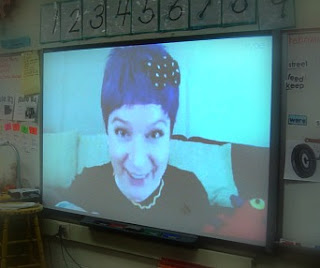 Ame read Boy + Bot to the students giving it her own special voice and emphasis drawing attention to those part she wanted them to notice in the writing and illustrations.  As she read she would pause, inviting comments from the students.  She spoke about how Boy and Bot were different on the outside but cared for one another the same on the inside.

When I've returned to the classes since the Skype visits the students' beam when speaking about meeting Ame Dyckman; wanting to chat with her again.  After the first Skype the word was out about Ame; the principal and several parents appeared at the second and subsequent Skypes.  When someone as extraordinary as Ame Dyckman shares their time with you, it's the very best kind of day. 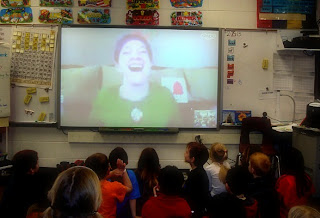 We all feel so very fortunate to have been able to have this delightful lady come into our classrooms.  There is never a dull or unhappy moment in her presence.  We all thank her from the bottom (and top and everything in between) of our hearts.


Please follow some or all of the embedded links to learn more about all these awesome authors and illustrators and the Kid-Lit Cares benefit. 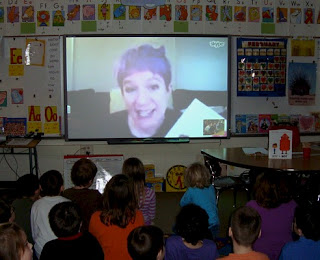