Raise your hand if you've ever been accused of committing an act in which you had absolutely nothing to do with it...whatsoever.  It's bad enough when you may have been an observer and tried to stop the perpetrator, but even worse if you weren't even present when the deed was done.  Despite all your protests to the contrary, the blame has fallen squarely on your shoulders; you're the oldest, smartest, smallest or tallest.  The list of reasons is endless. 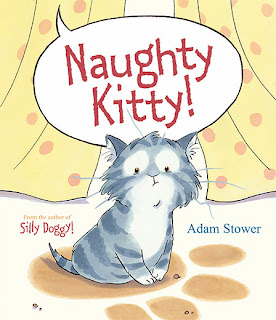 Imagine how frustrating it must be for one without the ability to communicate.  It's hard to know what to do when trouble follows like a shadow.  The cheerful protagonist, Lily, introduced to readers in Silly Doggy! (reviewed here) has returned in Adam Stower's latest title, Naughty Kitty! (Templar Publishing).


Lily wanted a doggy,
but her mum said dogs were too messy,
too smelly, and far too much trouble.
So she got Lily something else...

Even though this newest addition to Lily's daily routine will not perform tricks, he's as cute as a button.  How hard is it going to be to feed and pet until he purrs, this sweet little cat?  Within minutes Lily is rethinking her original assessment of her fresh feline friendship.

Utter destruction greets Lily after leaving the kitty alone in the kitchen. How could so much happen in such a short time and where did all the food go?  One minute alone in the living room, yields the same results.  There are rips and tears everywhere.

As soon as Lily gets one mess picked up, it's replaced by another.  The muss is escalating by the minute.  The cat door is ripped off its hinges, poor King Kong (the goldfish) is terrified, Lily's sausages disappear off her fork as she is watching kitty, there's hairy hair on the beds and phew! what's that stuff on the rug?

On a trip outside to the garbage container Lily and the tiny trouble-maker are startled by the next door neighbor's dog, running into the yard barking.  Picking up the kitten, eyes closed Lily calls for help.  Why, it's a miracle!  Kitty has saved the day...or has he.


There is nothing funnier for readers than text which is contradictory to the illustrations.  Adam Stower has a knack for portraying Lily's thoughts through dialogue and narration in perfect sync with each page turn.  Her lack of understanding, downright bewilderment, at the cause of all these catastrophes is the type of humor appealing to the child in all of us.  Here's a sample of dialogue followed by a thought.

"How could you?
Eight fish fingers, all the sticky biscuits,
plums, pickles, Mum's pink party cake,
Dad's pork chop, the orange pop, two teaspoons
and a washing up sponge!"

And she's just fed him
a whole bowl of Kittibix!


Although the front jacket and cover offer readers a huge clue as to the true culprit (the small kitty sitting on a large paw print), the back jacket and cover tell the tale (a large orange and brown striped tail is curled from beneath the curtain).  The opening and closing endpapers done in shades of blue and gray, much like blueprints, give us more clues as to how the story will unfold and continue even after the conclusion.  Stower has used a letter, postcard, notice and newspaper on the front porch providing an enticing introduction followed at the end with a newspaper resting across a table set for tea proclaiming further hilarity.

Full color illustrations vary in their coverage, two pages or a single page with smaller insets among white space galore.  Dialogue is shown in speech bubbles of different sizes for emphasis. The expressions on the kitty, a true innocent, are priceless.  Subtle and not so subtle hints as to the identity of the real king of disaster are found on the edge of the hedge, along the window ledge, coming in through a doorway, looking over the table top, or in the news coverage on the television.  Hard to miss large paw prints are plentiful.  My favorite illustration is that for the words ...and the bad dog ran away.  Lily is holding the cat by its shoulders staring in amazement, oblivious to the tiger looming over the fence behind her.  The kitten knows though, looking above.


Whether you read this book once or one hundred times, the results will be the same...guaranteed; laughter and grins.  Naughty Kitty! written and illustrated by Adam Stower is the perfect partner for its predecessor, Silly Doggy!  The play on words gives readers an unexpected twist at the end; hinting at the possibility of a third book featuring Lily and her blissful ignorance.

As far as I know this title has not been released in the US yet.  I couldn't wait and received my copy from the UK.  Two different web sites linked in Adam Stower's name above provide information and additional illustrations.
Posted by Xena's Mom at 7:59 AM