For The Good Of The Cause...

For several hours this week I spoke with our sixth grade students about the importance of biographies and autobiographies.  When you peer into the lives of these people you gain a truer comprehension of the impact of opportunities taken, determination to make changes and persistence in following a goal or dream.  The ultimate question is, did this person, in touching a single life or many, change the course of history and on what scale; family, community, nation, world? 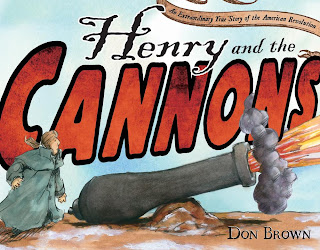 When an author/illustrator focuses on a specific time period from the past, zooming out to give us a broader, more in-depth picture beyond dates, places and peoples' names, it's much easier to create a picture in your head of what actually happened.  Don Brown's new title, Henry and the Cannons: An Extraordinary True Story of the American Revolution (Roaring Brook Press), does this and does it very well.  He has taken what might have been a sentence or two from a textbook and given us a story to remember.


It was the winter of 1775.
The American Revolution had begun, and things weren't going well for the Patriots of Boston, Massachusetts.

The British Army had control of Boston, as General George Washington and his troops looked down from the hills outside the city.  What they needed were those British cannons recovered by Colonel Benedict Arnold at Fort Ticonderoga, New York in May.  How to get them over 300 miles of rugged terrain was a huge problem in 1775.

Although a bookseller by trade, the mind of Henry Knox was wired for military strategy, maneuvers, and fortifications.  His skills had not gone unnoticed.  When he told General Washington he could bring those cannons to Boston, he was ordered to do so.

It's hard to imagine riding on horseback for forty miles a day in the dead of winter but Henry did it.  It's hard to imagine the selection of fifty-nine cannons weighing 120,000 pounds, hauled to Lake George, loaded on to three boats and over ten days time in horrendous weather conditions, taken to the other end of the lake, but Henry and his men did it. It's hard to imagine moving those cannons by forty-two sleds drawn by oxen and horses but Henry, his men, and local Patriots did it.


What raises this book above a mere factual accounting are the added details, gleaned from research, provided by Don Brown's gifted use of language.

Brown's word choices provide an experience of the senses; heaved the cannons, ropes water-soaked and slick, muscles and breath burned.


The first illustrations readers see on the front and back jacket and beckon, seize and pull them right into the book. It's hard to resist the bold, bright red lettering on Cannons with flames shooting forth from the mouth of another.  With two page turns they're looking at a map of Henry Knox's journey between Fort Ticonderoga and Boston wrapped around the title verso.

There is a coolness to the color palette, shades of browns, blues and grays, indicative of the winter months and the current state of affairs in Boston; appropriately shifting in brightness and more color for the last three visuals.  Rendered in watercolor the pictures convey, without intricate detail, movement and mood through the use of perspective, layout, layers and shading.  Brown carefully alters the illustration sizes to pair with the text's pacing; two page, a single page, panels, insets all surrounded by narrow frames of white with a thin gray line.  Very cleverly ( in one of my favorite illustrations) he breaks a single visual into three panels to show the changing weather as Henry rides to Fort Ticonderoga.

Clearly Henry and the Cannons: An Extraordinary True Story of the American Revolution by Don Brown illuminates the exploits of a single individual who made the impossible happen; definitely a game changer for the cause of the Patriots. Brown provides a bibliography of resources at the close of the book.  To view his official author website follow the link embedded in his name.  Several years ago he was interviewed at Seven Impossible Things Before Breakfast.  Follow this link to the publisher website to view additional illustrations from the book (including my favorite).