In 2010 author Marilyn Singer introduced a new poetic form, the reverso.  In her title Mirror, Mirror: A Book of Reversible Verse (Dutton Children's Books) for the first time we read two poems side by side (the reverso); same words in each but on the left we read from top to bottom, on the right using the same order from bottom to top.  The only alterations were in punctuation and capitalization.  She put a whole refreshing spin on fairy tales we thought we knew. 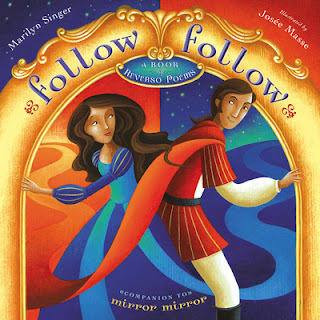 Last month a companion title, Follow Follow: A Book of Reverso Poems (Dial Books for Young Readers, February 7, 2013), illustrated again by Josee Masse was released.  Twelve folktales accompanied by an introduction and conclusion are altered with Marilyn Singer's special brand of vision.  She leads and we follow...follow.

Readers are challenged to see both sides of wishing, the nakedness of an emperor, a princess who may or may not laugh, and the mindset of Aesop's most famous racers.  The test to find a real princess, the choice to loose your voice to gain love, the bravado of a cat and the consequences of a debt unpaid take you down and then up again, always changing the outcome.  Sometimes we read the words of more than one character.  Decisions we never understood before are revealed through a single person's musings.

Have you ever stopped to consider how the mole might feel down in his hole, alone?  Or the third pig in his house of bricks at the demise of the greedy wolf?  What of the emperor who discovers nearly too late the true worth of song?  As a soldier sleeps, princesses wish him slumber but a father wishes him awake.


With each reading of these fourteen reverso poems your admiration can't help but grow at the adept use of language, the placement of words to form two distinct interpretations of a single tale.  It's hard to imagine the time, the care, needed to get every single syllable in its perfect position.  When read silently it gently touches, but read aloud the rhythm of each is prevalent and strong.  Marilyn Singer's creativeness, her gift, shines in this inventive style.


Bright, lush colors beckon to readers from the front cover and jacket.  The artistic, skillful blending of two visuals into a complete illustration, used for each, poem begins here.  Spring green endpapers match the greens used in the title page visual.  Wide two-tone pale blue stripes, the background for the title page, verso and dedication page, are widened to showcase the two poems of each reverso.

It's easy to move into the realm of make-believe through the pictures rendered in acrylics by Josee Masse.  Shades and hues, striking color palettes, especially blues, greens, golds and reds, add a richness to the verses.  The tiniest of details within the layers extends interest; the snail beside the tortoise, the odorous fish coming out of the cat's bag, and the portraits of the two pigs on pig three's wall.  Royal purple endpapers fittingly close this volume.


Words inviting wisdom, creating wonder, penned with purpose on the pages of Follow Follow: A Book of Reverso Poems by Marilyn Singer are elevated by the rich pictorial portrayals of illustrator, Josee Masse.  Readers will be drawn to the magic of the reverso; its ability to capture and convey every nuance known or unknown about these tales.  Of equal beauty are the two poems opening and closing the collection; author reflections on writing, fairies and children.

Singer includes a short explanation of the reverso as well as each tale on the final page. Links to her site and Josee Masse are embedded in their names.
Posted by Xena's Mom at 8:10 AM