Two World Leaders and A Christmas 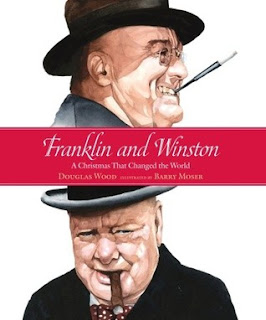 It's a given that I have enjoyed the pursuit of history for as far back as I can remember; fiction or fact.  For me the crucial key to bringing a blast from the past from the dry, mundane statements frequently found in textbooks to a vital, living reflection is the extent of research that leads to humanizing the players and events.  In Franklin and Winston:  A Christmas That Changed the World (Candlewick Press, September 13, 2011) written by Douglas Wood and illustrated by Barry Moser the particular days addressed within are as if I was witness to them only yesterday.

It was the winter of 1941.  The valiant battleship HMS Duke of York struggled against the screaming winds and forty-foot waves of a mighty December gale.

Winston S. Churchill, prime minister of Great Britain is on his way to the United States to spend Christmas with President Franklin D. Roosevelt of these United States.  A subtle insertion, truly seeming as part of the story, by author Wood gives a short background into the dreams of a youthful Churchill coupled with his trials, tribulations and staunch attitude in leading the British people up to this point.  He is most anxious to complete the crossing to brainstorm with President Roosevelt on what they might do to fight their enemies and bring peace to the world.

In Washington D. C. Roosevelt awaits the arrival of the prime minister feeling the heaviness of his presidential responsibilities in the wake of the bombing of Pearl Harbor, Hawaii.  Wood relates the philosophy that Roosevelt has held since boyhood about service to his country despite polio attacking his body.  He and Churchill have the same end goal---a world that is safe for our children.

Amid the formalities of the Christmas and New Year festivities, White House dinners and press conferences the two met surrounded by strategists daily for nearly a month many times late into the night. Winston made for an unusual and entertaining guest roaming the halls at all hours; the two would pop into each others' rooms unannounced if something weighed on their minds.  Roosevelt and Churchill cemented a friendship that would last a lifetime.

The day after Christmas Churchill addressed the Congress of the United States of America.  Given the well earned reputation as a speaker of the highest caliber, the ideas proposed by Churchill were hardily embraced by those in attendance and by the American people listening on their radios.  This Grand Alliance named "The Declaration of the United Nations" did indeed alter the destiny facing countries throughout the world at that time and has to this day far-reaching effects.

Douglas Wood known for his titles, Old Turtle, Grandad's Prayers of the Earth and Nothing to Do, breaths life into Roosevelt and Churchill through those intimate details about each which his research, primary and secondary sources listed in a bibliography at the book's end, revealed.  The personal, inspirational quotes of each leader carefully placed throughout the narrative make readers feel as though they are the proverbial "fly on the wall".  The little tidbits of information, Churchill being too excited to sleep that first night to the extent that he had to take a sleeping pill, are what elevate these men of history from names on paper to real flesh and blood persons.

Wood includes a listing of accomplishments that arose from this meeting in his Afterword.  In an Author's Note he speaks of growing up hearing of this time in history, his father serving in Italy and Arabia during World War II and of other male family members service in other parts of the world, just as I did, my father having served in the units stationed on the Aleutian Islands.

As the winds of northern Michigan howl around my home this evening, we have yet again another gale warning on Lake Michigan and along the shoreline, it is not too hard to imagine the crossing Churchill made across the Atlantic that December in 1941 especially when the outstanding skills of illustrator Barry Moser grace the book's pages capturing the essence of the people and events like the lens of a camera.  On the last page of the book readers see:

The book was designed and typeset by Barry Moser, who also composed and designed the illustrations.

Using transparent watercolor on papers made in Fabriano, Italy, Moser used historical photographs, which were freely cropped, modified, and merged into totally new images by the illustrator.

Most of these illustrations belong framed and hanging on a museum wall but Moser commands that respect for his work.  Readers feel that if they were to reach out and touch a character they would be warm, alive.  The use of black and white only on the first visual of the ship crossing the ocean toward the United States portrays the chilling danger of the voyage.  It contrasts, as it should, with the warmth of the lighting of the national Christmas tree when both Roosevelt and Churchill spoke or the energy of Churchill's speech to Congress.

Author Douglas Wood and illustrator Barry Moser, both outstanding in their individual endeavors, together are masterful.  Captivating nonfiction, although in picture book format, belonging in any setting for personal or educational purposes whatever the age is what Franklin and Winston:  A Christmas That Changed the World offers impressively.
Posted by Xena's Mom at 7:46 AM