Delicious From The Very First Bite

To me, as I have stated previously, every single component of a book is important, cover to cover and everything in between.  When a book begins with a dedication like this, you know without a doubt that you are in for a one-of-a-kind treat.

To my faithful readers,
because a book is like a pie---
the only thing more satisfying than cooking up the story
is knowing that somebody might be out there
eating it up with a spoon.
--SW 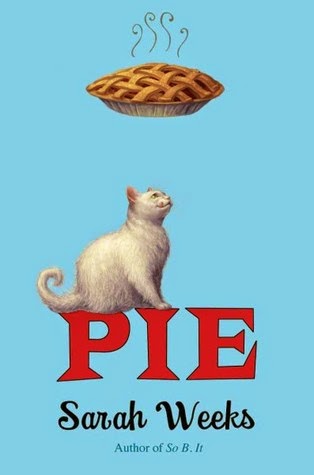 Simply named, Pie, this new title by Sarah Weeks is anything but that; full of delightful characters, lives interwoven by events, a twisting plot line and a picture perfect setting.  It has all the ingredients a special recipe needs to be named "a keeper".

From as early as her mud pie making days Polly is destined to be a baker of incomparable talents.  When her dream of opening a pie shop reaches fruition the townspeople are baffled by her refusing to charge for her pies.

Why on earth would I charge people money for something that brings me so much pleasure?

Not wishing to take advantage of Polly's generosity, locals begin to leave ingredients on her doorstep.  Soon word of this unusual arrangement spreads like wildfire throughout the country; people are coming from every state in the Union bringing goodies to be used in her pies.  Polly has a unique gift, each person's favorite pie seems to reach through their palate touching a secret part of their soul.  When one such visitor enters one of her pies in the coveted Blueberry Award, Polly wins year after year, thirteen to be exact.

After her sudden death Polly's niece, Alice, misses her the most; there was a particular, loving connection between the two.  What Alice's parents would or could not provide for Alice, Polly did spending hours with her in the shop every day.  Much to her Aunt Polly's joy Alice has a knack for creating catchy rhyming four line songs which are generously sprinkled throughout the story.

But sorrow soon turns to puzzlement for everyone when the terms of Polly Portman's will are made known.  It would seem her secret pie crust recipe has been left to her cantankerous cat, Lardo and Lardo has been left in the care of Alice.

Without the influx of visitors to Ipswitch the town's prosperity is on the wan;  everyone now turns to making pies with hilarious results hoping to be the next Blueberry Award winner.

"My mom was planning to take a shot at it," said Charlie.  "But she changed her mind.  Yesterday she tried to make a gooseberry pie and it came out so bad, even the dog wouldn't touch it.  And he drinks out of the john!"

A mysterious green car is seen lurking about on the city streets.  And who is Miss DeSoto really?  Lardo turns up missing, the shop, Pie, and Polly's upstairs apartment are vandalized.  With the assistance of a classmate, Charlie Erdling, Alice begins to gather clues adding up to a lasting friendship, thwarting a thief, the refreshing of family ties and a shocking discovery.

There were a lot of rumors that had been passed around school over the years about Miss Gurke and the reason she wore such loose-fitting clothes.  One of the most popular stories was that she was hiding the mummified body of a kid who'd been tardy to school too many times.

Mention of Charlie's and Alice's love of the television show, Sky King, newly inaugurated sleuths that they are, is a pure joy. I could hardly wait to watch that show each week growing up as Penny and her uncle flew around in Songbird solving crimes. The finishing touch on this title, a true piece of perfection, is the Epilogue forty years later.  Okay, while that final chapter is just what readers will be craving, the final, final touch is that each chapter begins with a pie recipe, fourteen in all, all having been made by Sarah Weeks herself.

I inhaled this book; what should have lasted days, lasted hours.  When I turned the final page I was shocked to learn that there was nothing left; I was wanting it to go on much like a gourmet fork in hand who looks dismayed at an empty plate.  Having read parts of it more than twice now I can honestly say that Sarah Weeks followed what Aunt Polly told Alice once:

The most important ingredient in a pie is the love that goes into making it.

What this dreary winter day needs is for the odor of a freshly baked Buttermilk Pie (pg. 24) to come wafting from the kitchen as the introduction of Sky King plays quietly in the background.

For those foodies out there go to Sarah Weeks' website referenced above.  The link to her blog contains a superb recipe for pie crust.  She says that she has had so many requests for a pie crust recipe despite Pie being a work of fiction that she is going to start posting real pie crust recipes.
Posted by Xena's Mom at 6:43 AM