I can't wait to hold up the book, Not Inside This House!, open with front and back covers prominently displayed to a group of children listening to their peals of laughter.  Author (and children's book editor) Kevin Lewis has taken childhood curiosity, that urge to explore and discover, to exaggerated heights.   Complementing and extending his text is the artwork of David Ercolini. 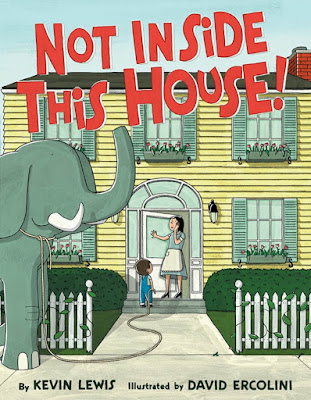 Livingstone Columbus Magellan Crouse most certainly lives up to the considerable histories attached to his given names preferring to search the natural world rather than enjoy any items purchased for children from a store.  Not only does he venture where most boys are known to go (and then beyond) but he feels compelled to bring his living discoveries home.

"Livingstone Columbus Magellan Crouse,
I'll have no bugs inside this house!
I'll say it once.  Won't say it twice.
To speak again will not suffice!"

Using jaunty rhyming lines Lewis allows each reader to traipse along with Livingstone on his travels as he unsuccessfully attempts to sneak first one than another of his finds into his house.  Each meets with his Mom's rhythmic refrain altered by the specimens and the number of his efforts.  Hilarity hits as each time the size of the critter increases; mouse, pig, moose, elephant and then, well let your imagination run wild as did Lewis.

Needless to say, Mom realizes, much as the man in Margo Zemach's It Could Always Be Worse:  A Yiddish Folk Tale, that perhaps she might need to rethink her original request.  Having experienced escalating destruction, perhaps bugs are not so bad compared to the alternative.

Let us hope that this first picture book for David Ercolini is the beginning of a long career.  It comes as no surprise that he won the Grand Prize at the Society of Children's Book Writers and Illustrators 2009 Winter Conference.

Endpapers done in bold red and cream stripes reminiscent of a circus tent dotted with bugs, beetles, butterflies and a singular worm set the stage perfectly. Next readers see a double page spread done in tiny dotted swirls showing a large Livingstone net in hand raised for capture in shadow with the title in huge red letters.  Ercolini's skillful use of ink drawing, black-and-white painting and Photoshop continues throughout the story as each verse is visualized across two pages.

Ercolini proceeds with the original color scheme of his endpapers as every illustration has a spot of red or a combination of red/white or red/cream creating a continuity throughout the tale. It is his attention to detail, his interpretation of the text that amplifies the humor.  One of several of my favorite visuals is of Livingstone's darkened bedroom, the moose casually munching on a page from his space book, another book scattered on the floor, polka-dotted underwear hanging out from a nearly closed dresser drawer, a picture on the wall at an angle, his Mom peering through one of two antler-shaped holes in the wall on either side of his bedroom door now held in place by tape as Livingstone calmly sets up a tent made with a sheet and rope, Coleman-like lantern lit, sleeping bag, canteen and marshmallows at the ready.

Truthfully, my mouth has been been constantly grinning throughout the writing of this review as I repeat Mom's refrain in my mind knowing children will out loud.  Kevin Lewis strikes a chord that will resonant with any parent that has faced living nature brought unaware into their home as children will laugh knowing they are the cause of this quandary.  David Ercolini puts on paper what our imaginations have conjured at the reading adding his special touches that clearly demonstrate his understanding of children, of boyhood in particular.

Let us hope this is the first of many successful collaborations by the team of Kevin Lewis and David Ercolini.
Posted by Xena's Mom at 6:33 AM