A New Take on the Alphabet

For nearly thirty years I have been collecting alphabet books.  I was particularly thrilled to see two new original titles talked about in A Bit of Abecedarianship Before Breakfast:  "Operation Alphabet" and Paul Thurlby,  a post at Seven Impossible Things Before Breakfast by blogger, Julie Danielson in October.  I recently acquired my own personal copy of Paul Thurlby's Alphabet by Paul Thurlby. 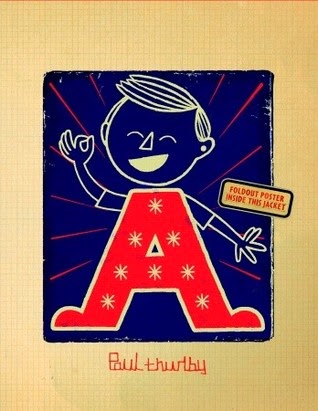 To begin I, much like Ian Falconer's Olivia, love the color red.  It seems to shout out loud, "Hey everyone, here I am.  Let's have some fun!"  All but seven of the letter illustrations have shades of red in the smallest detail or as large as a background or defining character.

The book jacket on this title unfolds to become a poster illuminating smaller versions of all the letters gathered in one spot for your viewing pleasure.  The front and back endpapers are a tiled repetitious mosaic of "A", "B" and "C".  The title page and Artist's note at the end are rendered on an aged-looking graph paper design replete with alphabetic doodles; possibly notes made by Thurlby as part of his design process.

While the format of this book is simple, an upper and lower case letter centered on the left page with " " for on the right side, the result is astoundingly clever.  Each letter graphically defines the featured word; "A" for Awesome!, "B" for Bounce, "C" for Catch...  Use of varied font styles for each word will delight appreciative readers as will his skill at adding those extra little touches.  In "Z" for Zip the Z is being unzipped but the "i" in zip is a zipper also.

Another interesting note is Thurlby choice of words representing each of the letters.  While some are typical, "D" for Dog, "M" for Mountain others are more quirky, unusual, "E" for Embrace, "Q" for Quicksand.  He shows no partiality to parts of speech either; words are nouns, verbs, adjectives.

Paul Thurlby's venture into the world of children's books began, as he states in his Artist's Note, as the result of a Christmas present, a book titled ABC3D, a paper sculpturing marvel by Marion Bataille. (Without shame I admit that I, too, own a copy of this book.) As he completed each letter he would post them online to bloggers' delight.  Great graphic design does not go without comment.  A literary agent noticed his letters and a book was born.

Thurlby further states in his note:  I use old books, postcards, and pieces of paper for the backgrounds.  I will often buy an old book just to use its back cover!  In gathering these pieces of time each illustration, digitally created, gives the readers the impression of gazing at vintage artwork fused with present playfulness.  Repeated readings will reveal new details or offer for discussion the possibility of what might be included.

Paul Thurlby's Alphabet is a refreshing perspective on those twenty-six letters which have given us so many amazing literary wonders.  Employing his expert workmanship in graphic design Paul Thurlby presents illustrations, each of which is, worthy of framing.  Lucky for us his web site linked above provides readers with the ability to purchase his book, prints and cards of his alphabet, a set of numbers and other delightful examples of his creativeness.
Posted by Xena's Mom at 11:01 AM