This Dog Has Its Day

Am I a dog lover?  Yes, true blue, through and through.  Would I have picked up A Dog Is A Dog if I were not a dog lover?  The answer to that question would be a resounding YES!  Who can resist a cheery, colorful cover sporting a wide-eyed grinning dog such as that created by debt author/illustrator Stephen Shaskan? 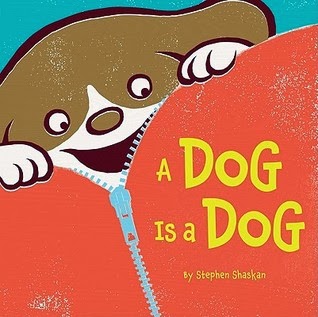 A story told in short rhyming phrases encourages audience participation as dog suns on the beach, glides on the ice, becomes skinny or fat but then wait...
it's a cat?!  What just happened?  A cat was zipped up inside a dog suit?

Okay, now readers are following the cat as it hisses, purrs, is hairless and cold or in furs, if it did or did not consume the pet goldfish but oh, no...there's that line again,

You're kidding me, right?  Is something going to unzip a cat suit?  Let's go back.  What's the last word?  Hmmmm...did.  What rhymes with did?

Shaskan catches readers off guard having a squid come into view at the turn of the page following it's adventures and mishaps until, believe it or not, a lounging moose graces the next two page spread.  To viewers pleasure after the moose's escapades the smiling brown and white dog is the final installment in this peeling off of layers.

Stephen Shaskan is a graduate of the Rhode Island School of Design.  It is amazing to note that all of his illustrations were digitally created; amazing because they give the appearance of wood block prints full of texture and detail.  A subdued lime green background layered with white daises is his introductory and closing endpapers.

Bold, vivid color combinations, brown and white dog, golden cat, purple squid, and a two-tone moose, heavily outlined grace a subtle gray wood grain background.  Hues of red, pink, gray, blue, golden yellow and green further liven these funny, frolicking characters.  While expressions are varied depending on the activity for the most part this is a happy, contented group.

In the initial six pages that address the dog there is a flow created by the presence of the picket fence and dog house.  As each animal is introduced the pages dedicated to them perpetuate their particular setting throughout those pages.   Without a doubt humor is evident in the main storyline but it completely permeates each visual.  Shaskan illustrates the phrase...

by having dog stand in front of a single picket of the fence paintbrush in hand as he completes a self portrait or by having dog laughingly roll slightly airborne as he holds an enormous balloon, surprised version of himself.  I believe that my favorite is moose leaping in the clear spotlighted by moose in the fog wearing a headlamp.  To be perfectly honest I absolutely love this entire book; every single page.

Spare, simple syncopated text infused with humor by the sheer absurdness of the tale accompanied by illustrations guaranteed to promote gales of laughter, places A Dog Is A Dog high up on the list of best books to share.  Stephen Shaskan reminds all who read his book that less is more; way more than you expect.  Hands down, this is delightful fare for the young and young at heart to be enjoyed repeatedly.

Please click on Stephen Shaskan's name at the top of this post to link to his outstanding web site containing numerous illustrations from this title as well as other bonus materials.  I'm thinking that I would like to see more of Dog in the future; actually anything by Stephen Shaskan.

Bark, George by Jules Feiffer might be a good title to pair with this.

Julie Danielson at Seven Impossible Things Before Breakfast has posted an entertaining and informative interview with Stephen Shaskan.
Posted by Xena's Mom at 6:32 AM