The answer, my friend...

I was still in elementary school when singer, songwriter, poet, Bob Dylan wrote the lyrics in 1962 for his song, Blowin' In The Wind.﻿  It was a year later when it appeared in his album, The Freewheelin' Bob Dylan.  It seems as though that song has always been humming in the back of my mind; in the mind of American culture ready to spring forth when needed. 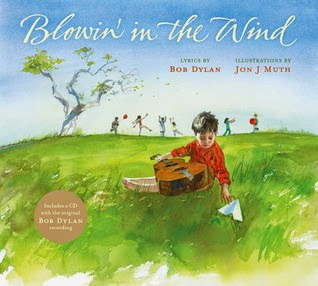 Using watercolor paints like a magician Jon J Muth breaths life into Dylan's lyrics for a younger audience in the title of the same name, Blowin' in the Wind (Sterling, November 1, 2011).  All the elements on the book's cover appear throughout the eloquent lavish illustrations spread across two pages.  Muted gray/white washed lines on front endpapers become trees in an autumn forest a single paper airplane floating through as our eyes move to the right.

A young boy in a striped shirt holding a large red ball gazes out a window at a paper airplane across from the title page.  We see him again on a road among many roads stretching to the horizon from a sparsely wooded slope watching that paper airplane as the first two lines of Dyan's song are read.

A wide expanse of sea and sky with a small red boat upon the water surround the small plane as it flies to the next pages.  Passengers in the boat are the boy in the striped shirt and an older girl. The next two pages show a hilltop with an old war cannon next to a small boy holding a red balloon and a young pig-tailed girl picking flowers as the small red boat drifts in the distance with the airplane tucked into a cloud-filled sky.  When the refrain appears on the fourth pictorial expanse all the children are in the boat, one pointing toward the airplane.

As each verse is read readers journey with the children following the flight of the paper airplane through mountainous Arctic waters, along a wall peopled with figures hands upraised as one drops down a guitar into the water, as the guitar is found, then as the guitar is broken and solace is offered by the boy with the ball and back up to the hillside where the cannon is now covered with flags from different nations.  With the final rendering of many paper airplanes seen against blue sky powder-puffed with clouds, the text of the last two lines is seen.  The closing endpapers show the children running along a shoreline at sunset following a white dove whose reflection in the water is the paper airplane.

Artist Jon J Muth has written a note at the book's end explaining his introduction to the song and why he chose to use the paper airplane throughout his interpretation.  His thoughts on the song's value are voiced in this note but readers have already seen those thoughts revealed in his illustrations.

Music historian and author of Mystery Train:  Images of America in Rock 'n' Roll Music, Greil Marcus also leaves readers with a note.  Embedded in the front cover is a CD recording of the original lyrics sung by Bob Dylan.

Each title illustrated by the hand of Jon J Muth is to be savored to fully appreciate the stunning, visual representations held in our hands.
Posted by Xena's Mom at 4:46 AM