The Benefits of Being You

Most people reach a point in their lives when despite their excitement for a future event, they've learned to not wish their days away.  Once in a while though, in the midst of a hot and humid week, thoughts of cooler and clearer weather drift into your thinking.  Autumn follows summer bringing clarity.  It also includes a favorite holiday enjoyed by many. 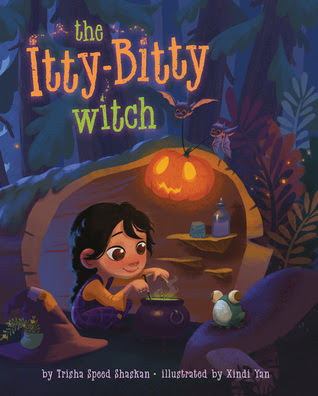 On October 31 Halloween allows costumed trick-or-treaters to go door to door hoping for generous neighbors.  In the realm of children's books there are beings who are not costumed.  They don't pretend to be ghosts, witches, superheroes, robots, famous or fictional personalities because that's who they are.  The Itty-Bitty Witch (Two Lions, July 16, 2019) written by Trisha Speed Shaskan with illustrations by Xindi Yan is a warmhearted story of using what others see as a fault to seize the day.

Betty Ann Batsworth couldn't wait to get to her classroom. It was her first day as a first-grade witch.

When Betty walked into her classroom with her kinder-broom instead of a first-grade broom, she was teased and given the nickname of Itty Bitty.  She said her name was Betty but inside she was starting to shrink.  When her teacher Ms. Fit explained the Halloween Dash to her students, Betty knew she had to win.  Then they would call her Betty instead of Itty Bitty.

The very next day the practice for the race began.  Betty struggled because her broom was shorter.  She was left behind.  She thought a running start might help but it was a disaster.  She felt herself getting smaller inside.

For an entire month, Betty challenged herself but nothing, even arm-flapping, worked.  When Ms. Fit showed them the route the dash would take, Betty made up a poem to remember.  The teasing continued.  Betty informed one of her fellow students that she was not Itty Bitty but Betty. She did not feel big in her heart of hearts.

On the night of the Halloween Dash Betty had a great start, but her lead was short-lived.  She chanted the poem.  When she tried to follow the others past the cave, she nearly fell off her broom.  What should she do?  Sometimes we make our own magic.


Readers will find themselves entering into Betty's classroom willingly through the clever and compassionate writing of Trisha Speed Shaskan.  They will find themselves grinning at the last names given to the students.  Through dialogue, first-person thinking and narrative, we find ourselves identifying with and cheering for Betty Ann Batsworth.

For each attempt at becoming better at flying and the resulting teasing of some but not all her fellow witches, Trisha Speed Shaskan repeats how Betty feels inside, itty-bitty.  This makes the ending even more lively and uplifting.  What readers will appreciate is no matter how Betty feels, she does not give up.  She keeps thinking and having ideas.  Here is a passage.

Betty tried for speed.
She nose-dived.


When you open the dust jacket you are treated to a two-page scene on a full-moon night.  (I am working with an F & G.) Betty Ann Batsworth looks simply enchanting and lovable tucked inside the hollow log with the jack-o-lantern hanging to give her light for her work.  The bats and wide-eyed frog along with sparkles of magical light complete our close-up view of her.

The log continues over the spine with a large evergreen tree extending beyond the top of the right-side of the back portion of the jacket.  A full moon is framed by boughs from this tree.  Another large tree reaches in from the left.  Behind the ground along the bottom, a river winds through rolling hills.  Across the sky, in the distance, four witches fly.

Artist Xindi Yan does not waste any space and begins her visual interpretation on the title page with students walking by a scarecrow with a jack-o-lantern head and holding a sign reading:

The verso and first pages are a two-page picture of the darkened hallway outside the classroom.  One of the eerie items in this hallway is a huge caged eyeball hanging from the ceiling.  Through the doorway light drifts out, highlighting Betty.  Inside a skeleton of a dragon is suspended and in front of a large medieval-style window.

Each illustration rendered digitally spans two pages, full pages or smaller images are grouped on a single page.  Readers will pause at every page turn to admire all the atmospheric details; bats, plants, snakes, ghosts, headstones, and jack-o-lanterns.  Careful readers will notice how the moon gets closer and closer to becoming a full moon on Halloween.  The rich color palette provides added emphasis on the place and time of the story.  The wide-eyed looks on all the characters, especially Betty, will endear readers to them and her.

One of my many, many favorite illustrations is when Ms. Fit is showing her students the Halloween Dash course one night.  On the left of the double-page picture deep in the woods and above headstones is the map of the route.  Two bats are holding it in place.  The students are making their way down a large fallen log which acts as a bridge over the river.  In the distance are those rolling hills, mountains and a nearly full moon is shining down on the landscape.  Floating jack-o-lanterns light the path for Ms. Fit and her witches.  This is delightfully shivery and fun.


Readers are going to read this over and over, and listeners will request it read to them repeatedly.  The Itty-Bitty Witch written by Trisha Speed Shaskan with illustrations by Xindi Yan is going to be a fabulous seasonal title.  It brightens the way for those who feel as though they are diminished.  It asks those who might tease others to stop and think.  It features students who don't tease but decide to cheer for others.  You'll want to have a copy for your professional and personal collections.  You might want to purchase multiple copies to give away on Halloween instead of sweet treats.

To learn more about Trisha Speed Shaskan and Xindi Yan and their other work, please follow the links attached to their names to access their respective websites.  Trisha Speed Shaskan has accounts on Instagram and Twitter.  Xindi Yan has accounts on Instagram and Twitter.  Please take a few moments to watch the charming book trailer premiere at Scholastic's Ambassador of School Libraries John Schumacher's Watch. Connect. Read.  John chats with both Trisha and Xindi.

UPDATE:  On October 7, 2019, the illustrator posted a video about the process for creating the images.