With the advent of lots of rain and the warm temperatures, summer is in full bloom in northern Michigan.  There is an abundance of critters of all shapes and sizes and flowers, shrubs and trees in the wild.  Gardeners are giddy with their flourishing vegetables, annuals and perennials.  The air is literally humming with the sounds of life, buzzing honeybees, chirping crickets, melodious birdsong and the unmistakable huffs of startled rabbits and deer.

The more we know about those creatures sharing this planet with us, the better we can protect and respect them.  Author illustrator Owen Davey released two new titles in his popular series about animals, Bonkers About Beetles (Flying Eye Books, May 1, 2018 UK and Nobrow, June 5, 2018 US) (National Science Teachers Association, 2019 Outstanding Science Trade Book for Students K-12) and Fanatical About Frogs (Flying Eye Books, March 1, 2019 UK and Nobrow, June 18, 2019 US).  Both books are entertaining and informative with stunning images. 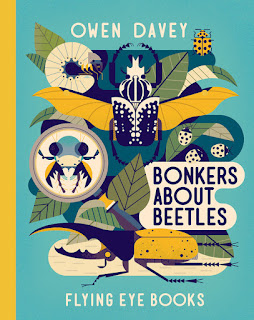 WHAT ARE BEETLES?
Beetles are a group of insects.  They have six
legs, three body segments and two feelers sticking
out of their heads.  Beetles are different from
most other insects in that their forewings form
a hard or leathery protective case over their backs.

With the exception of Antarctica, beetles reside on every continent, living on land and in the water.  Of these beetles some are predators, others are herbivores, and some enjoy both animals and plants.  There is another category of beetles known to feast on animals and plants that are dead.

Did you know beetles don't have lungs?  They breathe through spiracles.  Most beetles have a pronotum, antennae, elytra, horns, legs, eyes, rostrum, flight wings, mandibles and a mouth.  The elytra are a sturdier wing giving protection to the flight wings.  (The three body segments are labeled with these ten parts noted in those three sections by a number.)

The changes from egg to adult in a beetle can take as long as fifty years.  Where do you think the dung beetle lays a single egg?  Fireflies are featured for their use of light.  Depending on the specie they have a variety of flash and flight patterns.  This light attracts and acts as a warning.

There are beetles who point their heads to the ground with their bottoms up so water runs into their mouths before the heat of the desert glows hot and dry.  Beetles mimic color of other animals to protect themselves and to infiltrate other insects' colonies to feed on them.  They blend in their surroundings for survival, pretend to be dead, make loud noises, sting, stink and carry weaponry on their bodies.

In a feature on seven-spot ladybugs we discover they are loved in part for their appetite of aphids.  Their black and red coloring shouts to predators, I am toxic. Of the more than

6,000 described species of ladybugs around the world

one has the letter M on its pronotum.

The male Harlequin beetle has legs longer than its body giving him warrior status when necessary.  There is a beetle as big as an adult hand and one smaller than the punctuation period.  To help the hundreds of beetle species under threat you might consider building a bug hotel.  (A colorful and captioned diagram acts as a guide.) 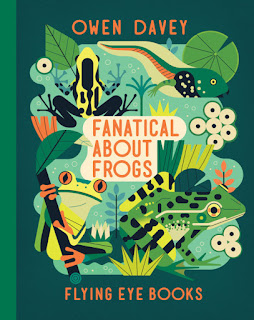 WHAT ARE FROGS?
Frogs are amphibians, which are animals that usually switch between living in water and living on land during different stages of their life cycle.  Frogs have short bodies, no tails and their back legs are typically longer than their front legs, usually with some webbing between their toes.

Did you know that all toads are frogs, but not all frogs are toads?  Just like beetles, frogs inhabit each continent with the exception of Antarctica.  Frogs have tympanum (a covering over their eardrum), nictitating membrane (a protective inner eyelid), eyes, warts (some), feet, adhesive pads (some), legs and tubercle (some).

Frogs' tongues are amazing!  They roll toward the back of their throat until they're needed.  The spit on their tongues changes textures before and during use to ensnare their food.  Like other animals the coloring of frogs can save their lives and hide them or shout about their poisonous nature.  If their hues are a warning, they are called aposematic.

Starry night reed frogs change their entire color.  They are white during the day and black during the night hours.  To beat the heat the Main's frog fashions

a waterproof cocoon around their bodies

The sounds of frogs are as varied as the species.  Some are beyond the ability of humans to hear them.  An American bull frog can sound like a cow or scream like a human.  You won't believe why frogs are commonly said to make the ribbit sound.  Most frogs begin as eggs, then tadpoles, froglets and then are adults.  Where the eggs are placed depends on the frogs.  Some of these spots are impressive.

A featured frog is the bright red-eyed treefrog who enjoys the nighttime best.  To stay safe during the day, they shape themselves to hide all their vivid shades.

Male red-eyed treefrogs shake their butts to win an argument.  (Who knew?)

Going from smooth to spiky is a trait of the Mutable Rainfrog.  Can you imagine walking along in central Africa and coming across a foot-long Goliath Frog?  One of the smallest frogs was only discovered nineteen years ago.  (It's about as big as my pinkie fingernail.)  There are frogs that cover thirteen feet in one jump.  Frogs like beetles need our help.  We need to observe them, but let them leave (and live) without our interference.


In both books Owen Davey begins with a table of contents highlighting an up-close-and-personal visual of a subject in his title.  He invites readers by defining what their physical characteristics are and showcasing their favorite foods; some of which are surprising.  Two pages are dedicated to detailed portraits carefully labeled.  Sections are included focusing on birth to adulthood.  Certain species are given features.  Each book includes chapters titled:

Weird and Wonderful
Little and Large
To Scale
And the Award Goes to . . .
__________Mythology
Conservation and an
Index.

Owen Davey writes to engage people's curiosity.  He piques our interest with unique facts and maintains this relationship with readers throughout the books using conversational and clever word choice as he informs us in his phrases, sentences and paragraphs.  You will also find humor.  Here are two passages, one from each book.

AND THE AWARD GOES TO . . .
The award for the strongest beetle
goes to the horned dung beetle.
This brawny beetle can pull 1,141
times its own body weight.  For a
human, that would mean the ability
to drag an entire airplane filled
with vacationers and their
luggage.  These beetles use their
immense strength to drive rivals
away from females.

The award for the loudest frog goes to the
Puerto Rican common coqui frog.  Males
call through the night with a noise as loud
as a lawn mower.  Their call has two distinct
tones that give the frog its name---"co" and
"kee."  The first tone drives away rival males
and the second tone is for enticing females.


One of the first things readers notice about the book cases of these books is their distinctive color palettes, the design and layout of the elements on the front, the texture of cloth (paper) on the book cases and the embossed titles.  The back of the books serves as end flaps on a dust jacket.  They challenge readers to continue with intriguing facts.  Smaller images but still graphically enchanting are centered between the text.

The matching opening and closing endpapers showcase a variety of shapes and sizes of each species.  Each page turn reveals a striking array of illustrations.  Owen Davey varies his sizes and the elements in each picture.  Some span two pages in a horizontal column.  Others move from left to right over the gutter to create a vertical column for a group of smaller visuals. Double-page pictures offer dramatic depictions.

His artwork shows every exquisite detail.  In a separate circle we might move in very close to see how the two sets of jaws on a beetle work. We are enchanted with the four flash and flight patterns of fireflies moving over a darkened landscape in purple hues and black.  We seek the rave beetle carefully hidden among the ants.  We marvel at the eye of the red-eyed treefrog and its nictitating membrane.  The two rows of poison dart frogs are deadly but beautiful.  It's hard not to gasp at the life-size picture of the Goliath frog.

Two of my favorite illustrations, one in each book, have to do with camouflage.  On a full-page picture we are asked to locate the longhorn beetle on a tree.  Shades of brown, green and black create a breathtaking view of the wonders of nature.  Four frogs in four horizontal panels depict how they can blend with a leaf, moss or mimic bird poop.


As he did in his first titles, Mad About Monkeys, Smart About Sharks and Crazy About Cats, Owen Davey has written and illustrated two stellar titles, Bonkers About Beetles and Fanatical About Frogs.  These books (this series) is the finest in nonfiction reaching readers in a range of ages.  I highly recommend both for your professional and personal collections.

Bonkers About Beetles - Owen Davey from Modik on Vimeo.


Be sure to visit Kid Lit Frenzy hosted by educator Alyson Beecher to view the other titles selected this week by participants in the 2019 Nonfiction Picture Book Challenge.
Posted by Xena's Mom at 10:47 PM