Just shy of eight year ago I wrote this in a note on Facebook.

Stepping from my doorway this morning, my eyes were greeted with an avian invasion; hundreds and hundreds carpeted my neighbors' lawns.  With my nearing they lifted as one feathered wing, gliding, soaring, swooping to another yard, continually joined by ten, twenty or thirty more.  As closer I came, finally the multitude rose above the lofty treetops, their command of air masterful as they left my sight.  Silence and the promise of more heat and humidity fell like an unwelcome cloak about my shoulders as Xena and I walked past the now empty parched grasses of the vacant field.

As a librarian, I begin to research as soon as I arrived back home.  For the first time in six decades of living, I had been gifted with witnessing a starling murmuration.  It is forever etched in my memory as one of the most incredibly beautiful things I have ever seen. 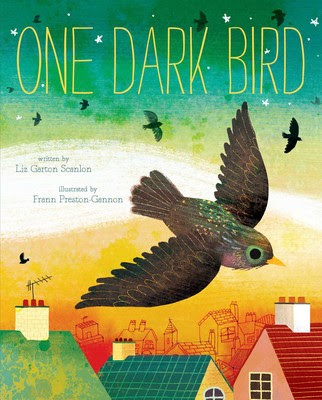 To see these birds fly in flawless synchronization is a remarkable experience; one which reminds us of the fascinating, fearless and stunning power of nature.  One Dark Bird (Beach Lane Books, an imprint of Simon & Schuster Children's Publishing Division, July 16, 2019) written by Liz Garton Scanlon with illustrations by Frann Preston-Gannon presents an illuminating portrait for younger readers of this spellbinding phenomenon.  It begins, as so many wonderful things do, with a single individual.

Presently, this one starling is joined by others.  They come together as two, three and four.  Now there are ten.  Quickly, as if receiving a cue from a conductor, five more make fifteen birds.

Suddenly their free flying is nearly frozen.  An enemy flies near them.  They join swirling and swerving as if one mind acts for all of them.  They flee to safety, looping and circling through the now starry sky.

To combine counting with this breathtaking event fully engages readers by drawing them into the gathering of the flock.  The rhythmic and rhyming words of author Liz Garton Scanlon create a gentle but vibrant cadence.  It's an invitation to spread our arms and joyously glide with our avian companions.  The use of alliteration further heightens the melodious narrative.  Here is a passage.

they dance together
without touch

The image of the single starling flying over a community on the open and matching dust jacket and book case extends from flap edge to flap edge.  The blend of vivid blues, greens, and golden yellow and orange with splashes of white act to accentuate the iridescent colors of the bird.  The few birds seen on the front multiply to the left, on the back, and on the front flap.  The placement of the ISBN incorporates it into a rooftop.  On the dust jacket the title text is in gold foil along with some of the stars there and on the back.

On the opening and closing endpapers hundreds of birds, a murmuration, are shown.  On the first scene the sky is much lighter as opposed to the darkening sky in the second scene.  On the dedication, verso and title pages, the single starling is flying toward the right edge of the right side.  Beneath the bird on a pale green-washed sky is the town.

Illustrator Frann Preston-Gannon rendered these illustrations using a mixture of both digital and hand-drawn techniques.  At times we will be brought close to the birds or are given a more panoramic view to emphasize the number.  The buildings and homes are shown both in full color and/or etched in the background.  Members of the town, from diverse races and ethnic backgrounds, are shown going about their daily business, whether it's work or play. We can see them in their windows and watch them following the flight of the birds.

As the numbers of birds increases, we are taken directly into the flock.  You can almost hear the beating of wings and the sound of feathered swoops, dipping up and down and around.  All the pictures span two pages.

One of my many, many favorite images is between sunset and the full moon rising in the dusk.  The homes and building are bathed in golden light accenting reddish tones with spots of green.  Over the buildings the starlings by the thousands move in a large wave with the majority in the center.  Their formation is highlighted with white.  Above them in the sky, a few stars wink around the shining celestial orb.

If you are seeking to enhance a theme on birds, spectacular natural occurrences, counting or to engage readers in sheer wonder, One Dark Bird written by Liz Garton Scanlon with illustrations by Frann Preston-Gannon is the ideal title.  A symphony of words and art recreate the beauty of murmuration.  On the title page an explanation of murmuration is given.  I highly recommend this title for your personal and professional collections.