At our births we are given names for reasons our parents may or may not reveal.  We are named in honor of family members, friends, events, and all kinds of favorite things.  As we progress through our lives an assortment of nicknames follows us.  These, too, represent a wide range of reasons.  They might reference a physical characteristic, a personality trait or something we've done or are about to do. 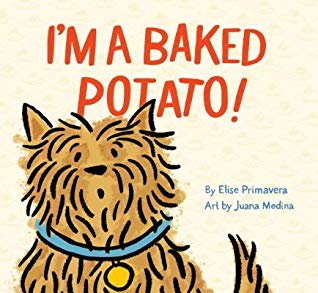 Sometimes these names and nicknames astonishingly fit us perfectly.  Other times, they definitely do not.  We have a choice how we will respond to our names and nicknames.  I'm A Baked Potato! (Chronicle Books, May 7, 2019) written by Elise Primavera with art by Juana Medina is about a dog adopted by a lady who has a taste for a very specific kind of food.

There was a lady who love baked potatoes.
She ate one every day.

Concerned she might not have a potato in stock for baking, she had her own garden of potatoes in her backyard.  Dogs were also loved by this lady.  She brought one home with her.  Holding this dog in her arms, she realized this dog had all the characteristics of . . . a baked potato.  He was her very own special baked potato.

He was called this multiple times during the day.  This lady and her dog were inseparable, sharing meals and her snuggly bed.  The lady knew she loved this dog more than she loved baked potatoes.

One day the lady left the house.  The dog left, too.  He looked and looked for her.  As he wandered through the community he came to a small house.  A grumpy big dog lived there.  When the lady's dog told him he was a baked potato, the cranky canine said he looked more like a groundhog.

As he continued to search, it started to rain.  He needed to find his lady.  Two more animals met the dog.  The first was deceptive and hungry.  Apparently, the little dog was a bunny rabbit.  The second arrived in the nick of time offering explanations and wisdom.

Using one of his best assets, the little dog left the happier home, and ran through the rain past the first two houses.  He followed his nose and his heart, listening until he heard two familiar words.  Knowing who you are makes home a sanctuary to be savored.


Author Elise Primavera conversationally begins this story chatting about a woman with a love for baked potatoes and dogs but the humor is revealed when the woman equates her new pooch pal with her favorite food.  Elise Primavera fashions a rhythm by describing the three traits the dog has in common with baked potatoes, the three times during the day she calls him Baked Potato and how attached the two are to one another.  This cadence continues throughout the story.

To accentuate pacing and provide readers with a more personal experience a combination of narrative and dialogue is used.  Descriptive verbs place emphasis on personalities and emotions of the characters.  Here is a passage.

It began to rain.


On the open and matching dust jacket and book case the little dog's expression combined with the book's title will have readers speculating about the tale and eager to begin reading the book.  They will probably be laughing, too.  The blend of brush strokes and bold lines on Baked Potato ask you to reach out and hug him.  Placing him on a creamy canvas with red font is an excellent design decision.  The title text is varnished.  If the light catches the dust jacket you can see an addition.  A pattern of tiny varnished baked potatoes on plates is a part of the background.  Genius.

To the left, on the back, in the center is a smaller image of the fireplace in the lady's home.  The little dog is curled in contentment in front of the fire.  The opening and closing endpapers are eight rows, red on red, of elements to be found in other homes.  All kinds of dogs are mixed in with these items.  It will have readers wondering about those pets and their people.

The illustrations by Juana Medina rendered digitally using Procreate are brimming with details and textures.  The lady has a baked potato weathervane on the roof of her home, baked potatoes are on the fabric of her bedspread and the inside of each house has family photographs readers will find interesting. The artwork is full-page pictures, a group of smaller visuals on a single page and two-page images.  At the end of the book the dedication and publication information pages appear like a framed photograph.  The animals Baked Potato encounters are featured along with him in a setting with several trees and potato plants.  Will readers notice the other teeny tiny visitor that also appeared in the first image?

One of my many favorite illustrations is when the lady first brings the dog home.  It is on a single page.  The lady is cuddling the dog in her arms and looking at him as she notices how much he resembles her favorite food.  The look on the dog's face is serene but also a little bit curious.


As soon as you show this book to listeners and readers, the smiles, giggles and grins will begin.  I'm A Baked Potato! written by Elise Primavera with art by Juana Medina is a humorous look at names, nicknames and home and how their definitions shift.  Readers will fall in love with this dog and his lady.  You will want to have this in your professional and personal collections.