Whether you are gathered in a classroom, a library, around a campfire, or wrapped in sleeping bags or blankets for a sleepover, one of the most memorable and satisfying activities is storytelling.  Most will agree scary stories, those tales crammed with creepiness, the unexpected and bone-chilling probabilities, are the most requested.  Listeners (and tellers) can venture into circumstances too terrifying to experience themselves and are brought back to safety at the story's end.  With each scary story heard (or told), courage grows. 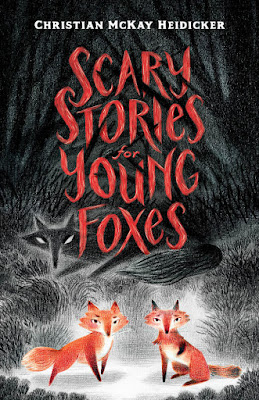 The most frightening stories are those steeped in reality.  Scary Stories for Young Foxes (Henry Holt and Company, July 30, 2019) written by Christian McKay Heidicker with art by Junyi Wu recounts the horrors of truth with stunning authenticity.  Readers will alternately be riveted or unnerved by the words they read.

THE HAUNTED SEASON had arrived in the Antler Wood.
The sky grayed, the leaves blushed red, and mist
coiled through the trees like something alive.  Even
the pumpkins began to rot and show their true
faces.

Seven kits are begging their mother for a scary story.  Each of her suggestions is met with a groan.  Nothing is scary enough.  As she settles in for the night, she warns them not to go to Bog Cavern.  An old storyteller lives there.  The tales she tells are too grim to be repeated.

The seven, of course, leave the safety of their den after their mother falls asleep, making their way through the darkening woods to Bog Cavern.  At first the storyteller, an ancient fox, says they are too young for these tales. She warns them of scary stories having two sides, light and dark.  One can guide you and the other can consume you.  There are eight stories to tell.  How many of the kits will be brave enough to remain to hear the final tale?

The seven listening kits are first introduced to Mia, her mother, her four siblings and their teacher Miss Vix.  A fatal turn of events has Mia and her mother running for their lives out of Eavey Wood, pursued by those who wish to devour them.  In the pause before the next tale begins, questions are asked and the shadowy voice from the dark entrance cautions them to be patient.

Six listening young foxes meet Uly, a young male kit with a deformed front paw.  He lives in Boulder Fields with six cruel sisters and a caring mother.  Uly is unable to care for himself without his mother's assistance. An unexpected visitor named Mr. Scratch forces Uly to make choices he would rather not make.  There are now five kits, listening intently.

In the next tale Mia and her mother suffer hideous, skin-crawling, encounters with a human guaranteed to leave readers stunned and wondering if they will ever read certain classic books again.  We are not even sure Mia is alive before four kits are leaning in to hear about Uly, at the edge of a foreboding forest trying to find food.  In seeking something to eat, Uly comes upon something he has never seen.  Fortunately, he saves Mia from certain death.

In the final four stories Mia and Uly truly struggle to stay alive, suffering the stuff of nightmares for foxes (and humans).  At times the evil and forces of nature are truly overwhelming, but the needs of others are a powerful motivator.  Soon there are three little foxes, then two and finally as the night moves toward dawn, only the youngest remains listening to the storyteller.  She, like readers, is torn between abject, gasping fear and the absorbing need to know what happens to Mia and Uly.  We like the young foxes and finally, the youngest, are told not all kits survive.  Is the end of a tale really the end?


First you have to know, there is hardly a second for you to recover from one harrowing incident to the next.  Thankfully, author Christian McKay Heidicker has two to six pages between the tales for conversations between the listening kits and the storyteller.  These do serve to provide momentary relief but also heighten the anxiety before the next portion begins.  In these pauses the atmosphere, the setting at Bog Cavern, is continually enhanced for readers.

Without a doubt, readers will enter the world of Mia and Uly completely.  The settings and circumstances in which they find themselves are depicted vividly.  We are emotionally tied to every experience.  Here are some of the earlier passages I marked.  (After this, I could not stop reading for a single moment until I read the last word.)

Yes, it may have been wise for fox kits to stay close to the den once the leaves began to fall.  But the fog and the frost and the old crimson moon had stirred something in their whiskers.

"But," the storyteller said, "if you don't listen closely . . . if you turn tail from the horror and don't stay till the end, then the darkness of the story can swallow all hope.  It can frighten you so deeply you'll never want to leave your den again. . . ."

Her mom slipped through the wind-woven vines, and Mia followed, nosing through the tangle until the leaves came to an abrupt end and the world opened like a gasp.  The sky beamed upon an emerald meadow.  A soft wind blew pale stripes across the grass, sweeping as far as Mia's eyes could see.


Scary Stories for Young Foxes written by Christian McKay Heidicker with art by Junyi Wu elevates the meaning of scary story to a whole new level.  With a striking use of language complemented by black and white drawings, readers will be too spooked to stop reading.  At the beginning of each tale is a full-page image relative to the story and a single smaller illustration is placed within each tale.  One stunning design tecnique is when we are in the present rather than the tales, the pages turn black with white text and small sticks act as framing.  You'll want to have this title for your personal and professional collections but beware . . .truthfully, beware.  (This post is written using an advanced reader's edition.)

To discover more about Christian McKay Heidicker and Junyi Wu and their other work, please follow the links attached to their names to access their respective websites.  Christian McKay Heidicker maintains accounts on Facebook and Twitter.  I think you be appropriately chilled by the book trailer as seen at Romper.  You can read an excerpt from this title at the publisher's website.
Posted by Xena's Mom at 12:30 AM