Love pushes aside fear and makes us brave.  We do and say things we would never do or say except when motivated by love.  If we feel the recipient of our affection is in a precarious situation, we race to the rescue. 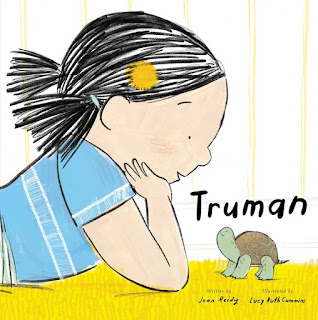 Science is still trying to decipher the development of lasting bonds between animals and humans.  For animals and their humans, science is not needed.  The love is tangible.  Truman (Atheneum Books for Young Readers, July 9, 2019) written by Jean Reidy with illustrations by Lucy Ruth Cummins explores courage compelled by a connection between a pet and his human.

Truman was small,
the size of a donut---
a small donut---
and every bit as sweet.

One day, Sarah, did some out-of-the-ordinary things.  She ate a banana for breakfast, wore a new sweater and a blue bow in her hair, put on a large backpack and gave Truman extra green beans for his meal, two to be exact.  With her finger she reached out to his shell, leaving a kiss.  She quietly gave him a message and left.

Truman was determined though.  He observed what had always been there with fresh eyes. Everything was daunting and HUGE without Sarah but a discovery, and a sound helped Truman to not only remember whispered words but feel them.  A happy arrival and a story at the end of the day gave one small tortoise named Truman all the hope his heart could hold for a future of togetherness with his human, Sarah.


With the first sentence author Jean Reidy gives us a character, a creature, we instantly adore.  Our affection grows upon reading the words, his Sarah.  Despite all the hustle and bustle of the outside world he sees from his tank, Truman finds serenity in living his life with Sarah.  Even when circumstances challenge that serenity, we are enveloped in the story.

Jean Reidy supplies us with a welcoming rhythm in repeating words.  Alliteration is used to excellent effect.  It's poetic.  She gives us a world seen through Truman's eyes using special descriptions.  We are told Sarah's backpack is big.  (There is room for thirty-two tortoises to fit inside it.)  Here is a passage.


What readers can't initially see is upon opening the dust jacket, Sarah's body extends over the spine. It covers nearly two-thirds of the back.  She is wearing a pink skirt, short, full and bouncy; almost like a tutu. Her knees are bent up and one stockinged foot crosses on top of the other.  It's a relaxed pose as she gazes lovingly at Truman.  The ISBN has been cleverly placed to appear as a fixture in the home.

On the book case readers can see and feel a wide, vivid yellow cloth spine.  The front and back look like pink frosting covered in sprinkles . . . like a donut.  It's exactly like a donut Truman is eating on the first page of the book.  On the opening and closing endpapers a two-tone, golden-green color is used to supply a pattern like Truman's shell.

Each illustration by Lucy Ruth Cummins was

rendered in gouache, brush marker, charcoal, and colored pencil, and were finished digitally.

On the heavier, matte-finished paper liberal, splendid use of white space, accentuates the details, lines and colors in these images.  Lucy Ruth Cummins includes everyday charm like Sarah and her mother eating breakfast barefoot with their shoes next to them on the floor.  When numbers are mentioned, the objects have black numbers next to them.  The color palette within Sarah's home is bright and the patterns are cheerful.

The facial features on Truman and Sarah are completely endearing.  Lucy Ruth Cummins has captured all his tortoise-ness eloquently.  Points-of-view shift from seeing a large portion of a city street with small Truman watching from his tank in the apartment window to a close-up of him eating one of his seven green beans.  For extra emotional emphasis and pacing, we are sometimes very close to Truman.

One of my many, many favorite illustrations spans two pages.  It is a close-up of Sarah and Truman on a white canvas.  Across most of the space Sarah is lying on her stomach, knees bent up and leaning her chin on one hand.  With her other hand she is coloring.  An open box of crayons is next to her on the left.  Other crayons are scattered on the left and right.  She is wearing a blue skirt with straps (a jumper).  Her shirt is pink with white hearts.  A yellow flower is tucked in her hair.  (This is important for later in the story.)  Close to Sarah, nearly nose to nose, is Truman.  He is resting his head on one of his arms as he watches her.


There is much to appreciate (love) about this book, Truman written by Jean Reidy with illustrations by Lucy Ruth Cummins.  It is a story of bravery born of love.  It is a story of a human and animal bond.  It is a story of the first day of school told from an entirely new perspective.  I highly recommend this title for your personal and professional collections.  We should all be so fortunate to have a Truman or a Sarah in our lives.

UPDATE:  December 8, 2019 At author, reviewer and blogger Julie Danielson's Seven Impossible Things Before Breakfast you can view additional artwork.
Posted by Xena's Mom at 9:13 AM