A Visit To Our Nearest Neighbor

It was still there, white against a blue sky, early on Sunday morning.  It didn't reappear again until seconds after midnight today.  It's received more attention than usual as people everywhere are commemorating the 50th anniversary of the Apollo 11 first moon landing on July 20, 1969. 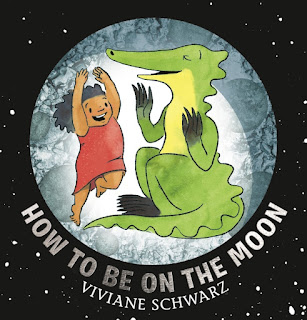 Wherever you are on Earth, looking at the moon fifty years later, it's still hard to comprehend traveling 238,900 miles through space to complete the journey there and repeat that distance to return home.  If you happen to be pondering a similar voyage, two best friends, Anna and Crocodile, who readers met in How to Find Gold, are happy to share their latest experiences.  How To Be On The Moon (Candlewick Press, June 4, 2019) written and illustrated by Viviane Schwarz will have you making your own plans for a lunar expedition.

Crocodile patiently points out the lack of light and people in space and the many, many miles from their home to the moon.  Effervescent Anna thinks all this sounds wonderful.  Then Crocodile reminds her of expertise needed to accomplish a trip to the moon.

Math is highly important; especially the ability to count backward.  Anna successfully demonstrates her stellar talent in this area. The length of time to arrive on the moon requires extreme patience.  Anna's questions and Crocodile's answers to this are not scientific but hilarious, nonetheless.

A formula for sandwiches and speed has Crocodile preparing one aspect and Anna working on the other requirement.  In a heartbeat the duo is ready. As the word one is uttered, they launch.  The first words out of Anna's mouth are:

An invented game helps pass the time as they float inside the rocket.  So does much needed sleep on Anna's part.  Touchdown completed and spacesuits in place, they take in the sights on and around the moon.  Conversations and contemplations concluded, Anna and Crocodile, inseparable as always, pursue all the world and their imaginations offer.


Told in an excellent blend of lively conversations and straightforward narrative by Viviane Schwarz this story actively engages readers from the first sentence to the final thought.  The personalities of Anna and Crocodile are revealed through their dialogue, indicating the balance between their characteristics.  The exuberance (and sometimes charming frankness) of Anna is met with the willing but reflective considerations of Crocodile.  Here is a passage.

"Hang on," said Crocodile.  "We will need special
skills to go to the moon."

"Math.  Without math, it will go wrong."

"Can you count backward?" asked Crocodile.


The rich black background peppered with stars extends across the front and back of the matching and open dust jacket and book case.  As their conversations disclose their personalities, so, too, does the image on the front of the jacket and case.  We can see the love Crocodile has for the spirited Anna.  Their color of Anna's dress and Crocodile's green-hued skin against the moon accentuate those very elements which make them the perfect pair.  On the jacket the title text is embossed in foil.  Depending on the angle the light strikes it, it appears silver or gold.

To the left, on the back, the rocket ship is pictured on the moon.  Anna has already jumped out, ready to explore.  Crocodile is carefully climbing from the top door.  They are both wearing spacesuits.  The rocket ship is an array of collaged colors and textures.

On the opening and closing endpapers, in black and white, is a scene from outer space with stars and celestial bodies.  A small visual on the initial title page shows a teapot and some board game pieces.  On the formal title page, beneath the text, Anna and Crocodile are playing a board game.

Each illustration, rendered in pencil, crayon, and watercolor, fills a full page with text on the opposite page on a white canvas or for dramatic effect the picture crosses the gutter creating a column for text.  Several double-page pictures, one without words, are stunning in their depictions.  To show the movement of Anna and Crocodile on the moon, two pages are divided into five panels.  This is absolutely wonderful and one of my many, many favorite pictures.

In the first panel Crocodile and Anna are floating slighting above the surface of the moon.  In the second panel they are driving in a vehicle by a crater.  In the third panel they are sliding past that crater.  In another visual Anna is standing at the edge of a dark hole, pulling Crocodile to safety.  In the final and largest panel, they are lying on their backs, chatting and looking at Earth.

The color choices throughout the book mirror Anna's buoyancy and Crocodile's acceptance and affection.  The facial features on both characters along with their body postures are sheer delight.  All the details and design items will have you pausing at each page turn.


Readers of all ages are reminded of the power of imagination in How To Be On The Moon written and illustrated by Viviane Schwarz.  We can see, through this story, how adventures taken in our minds offer us the opportunity to address more important concepts.  I know you'll want to have a copy of this title in your personal and professional collections.

To learn more about Viviane Schwarz and her other work, please follow the link attached to her name to access her website.  Viviane Schwarz has accounts on Facebook, Instagram and Twitter.  There is an interior image available at the publisher's website.  You can view other interior pictures at Penguin Random House and Walker.  I believe you will enjoy this video by the Arts Council England where we are introduced to Viviane Schwarz.

An introduction to the author and illustrator VIVIANE SCHWARZ from CLPE on Vimeo.