If Only We Would Listen

In this new home, to make a back yard space, a fenced-in place for Mulan, my chocolate Labrador, a tree service was hired to remove sixteen trees.  My apologies on that fateful day, to the trees, were profuse.  Trees have always been a huge part of my life.  Climbing to the tops of a special willow and another maple as a child, our entire neighborhood was spread before me.  Swings were tied to their sturdy boughs for hours of dizzy contemplation. Picnics were consumed and game board competitions were played in their shade.  Yellow ribbons were bravely tied all over one particular maple on another street in a different town years later.  A now tall, majestic blue spruce still grows in the back yard of my parent's former home, a tribute to my father.  Author friends sent me a tree in memory of my sweet Xena when she passed away.  The Xena tree moves with me. 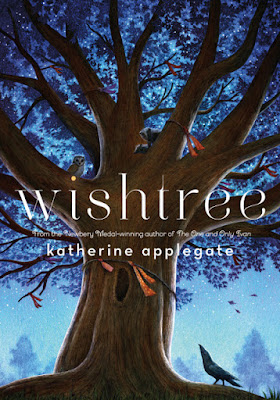 The weather here has been unseasonably dry and very hot.  Even though the calendar has declared it's autumn, Mother Nature has other ideas.  Walking outside now, the katydids are singing.  It's still seventy-eight degrees.  There's not a breath of air.  Tears still fill my eyes as I walk up to one of the thirty-three trees remaining on my corner lot.  My arms wrap around the rough bark of one as I lean my head on the trunk and whisper an apology and a thank you.  I have just finished reading Katherine Applegate's newest title, Wishtree (Feiwel and Friends, an imprint of Macmillan Publishing Group LLC, September 26, 2017).  I am listening.  I know you will, too.

It's hard to talk to trees.  We're not big on chitchat.

Red, a northern red oak, is speaking to us.  Two hundred sixteen rings count the days he has spent rooted to the land on a street near one small green and one small blue house.  Across the street another larger home stands.  This resident owns the little green and blue houses and the tree. You should know Red is the name given to him by his animal friends.  Humans know him as the wishtree.

Each year on the first day of May people come, hang and tie their wishes, hopes and dreams to his branches.  Some are whispered aloud as the paper, cloth, and even a pair of gym socks are attached.  Red keeps all the softly spoken conversations on this day and throughout the year a secret.  It's a rule trees and animals have to remain silent even though they can communicate.  Currently owl, raccoon and opossum babies and their mamas reside in Red's hollows.  Nearby a group of skunks, living under a porch, visit regularly.  A crow named Bongo is Red's best friend in every respect.

This past winter a new family moved into the little blue home.  One early morning at 2am the ten-year-old girl, Samar, visits Red leaving a wish.  She longs for a friend.  Thereafter when she comes to the tree, as the rest of the neighborhood sleeps, the baby animals come to her as she sits on a blanket.  She is no ordinary girl but there are those who do not like her or her family.  Everything is about to change.

One day a boy, an older boy, not known to Red approaches.  He carves something in the tree.  Red wonders if it is an early wish.  It is not.  It says

Two local police officers investigate, a reporter asks questions, and Francesca, the owner of the tree and two small houses, one blue and one green, arrives.  She makes a decision which shocks and saddens the animal realm.  It rallies Red.  There isn't much a tree can do, but Red like Samar is no ordinary tree.

A wish must be fulfilled.  A story stretching back through generations must be revealed.  A key must unlock forgotten history.  A four-letter word first uttered by one and then by many ignites the truth hidden in hearts.


By page two the first of thirty-two sticky notes was placed in my copy of Katherine Applegate's marvelous masterpiece.  Completely captivated by the voice of Red readers will eagerly embrace the ways of trees and animals learning about names, family dynamics and observations current and over the course of two-hundred plus years.  Red describes his domain as

Different languages, different food, different customs.  That's our neighborhood:  wild and tangled and colorful.  Like the best kind of garden.

Now something has changed.  A Muslim family in the small blue house is not welcomed by the adults in the small green house.  When Katherine introduces readers to the boy, Stephen, living in the green house, she sends out the beginning of hope.

Each of the short but insightful chapters ends with a sentence, a thought, which propels you forward and promotes reflection.  Through the conversations between the animals and Samar and Stephen we find ourselves trusting the unbelievable and wishing, yes wishing, for it all to be true.  And that's the gift Katherine Applegate has given readers with her words in this book.  She has given us the means to make a difference, to be agents of change, and to raise up the beauty found in human hearts and the world in which we live.  Here are a few sample passages.

Trees can't tell jokes.
But we can certainly tell stories.
And if all you hear is the whisper of leaves, don't
worry.  Most trees are introverts at heart.

Hollows are proof that something bad can become
something good with enough time and care
and hope.

Animals compete for resources, just like humans.
They eat one another.  They fight for dominance.
Nature is not always pretty or fair or kind.
But sometimes surprises happen.  And Samar
every spring night, reminded me there is beauty in
stillness and grace in acceptance.
And that you're never too old to be surprised.


I've read Wishtree written by Katherine Applegate with artwork on the cover and final black-and-white illustrations throughout by Charles Santoso (Ida, Always) twice in one evening.  I have returned to those thirty-two marked passages and read them repeatedly.  Every page sings out hope.  I will be ordering multiple copies to give away at Halloween.  You will want multiple copies on your professional bookshelves and one for your home collection.

A special website is dedicated to Wishtree.  You can leave a virtual wish there.  This coming Thursday is Nationwide Wishing Day.  Read how you can participate.  There is an event kit and a teacher's guide you can download.  The cover was revealed on the Nerdy Book Club by Katherine Applegate.  Katherine answers four questions at Publishers Weekly.  This book trailer was premiered on Scholastic's Ambassador of School Libraries, John Schumacher's blog, Watch. Connect. Read.  You will enjoy the chat there about this title with Katherine.