You often hear people talking about when my ship comes in.  Good fortune will shine upon their destiny.  Monetary riches will suddenly appear.  This ship, figuratively speaking, when it arrives will change their lives for the better. 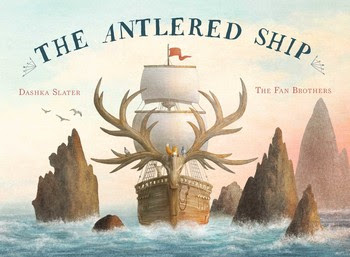 Some people spend every day wishing for this vessel to sail into the harbor of their hopes.  Other people work toward the very things this ship would offer.  Let's suppose there is a third group of individuals.  The Antlered Ship (Beach Lane Books, an imprint of Simon & Schuster Children's Publishing Division, September 12, 2017) written by Dashka Slater with illustrations by The Fan Brothers (Eric Fan and Terry Fan) presents readers with a crew of animals setting sail together for the first time; each searching for something they desire.  They aren't waiting for their ship to come in.  They're on it.

The day the antlered ship arrived,
Marco wondered about the wide world.

Marco was a fox, a fox with lots of questions.  His questions were full of curiosity about the deeper meanings and possibilities within the world as a whole.  When a fox had these types of questions, he had to look for answers.  He went to the ship.  As he crossed the dock, three deer left the deck, joining him.

Sylvia, the captain, was looking for a crew as she and her fellow deer were lost.  Marco agreed to go.  He had a need to know.  So did four pigeons with a leader named Victor.  They welcomed adventure.  The deer were hoping to locate Sweet Tree Island.

The weather and consequently the sea were not kind to the antlered ship or its occupants.  The pigeons preferred playing games.  The deer fretted about what could go wrong.  Marco continued to have questions.  They were shivery, soggy and a bit hungry with the limited provisions.  The fox decided a change in attitude was needed.

A recipe book and charts altered their outlook.  As if sensing their moods' shift, the seas calmed and the moon shown in a clearing night sky.  Oh, their troubles were not over because sailing the seas meant continued natural challenges and scuffles with nasty scoundrels but often it's those difficulties which bring us to the riches we sought.


Author Dashka Slater honors in this tale the right to examine one's world and life outside what is expected.  Each animal is seeking something beyond their distinctive and instinctive boundaries.  One would never expect three deer, four pigeons and a fox to set sail on a ship, an antlered ship.

Using an exemplary combination of narrative, conversation and Marco's thoughts we travel with the companions.  We experience their doubts during the storm.  We are uplifted with their renewed determination.  We cheer and smile at one of the best three word lines in the book.  We triumph alongside them in victories.  We take joy in their hillside reflections.  Here is a sample passage.

As they plotted their course, the wind picked up.
The storm clouds thinned into marvelous swirls.
"Raise the sails!" Sylvia cried.


When you open the dust jacket, the first thing you might think (if you are me) is I wish I could frame this artwork.  The antlered ship sailing through the Maze of Sharp Rocks at sunrise spans flap edge to flap edge.  It is a stunning display of adventure at sea.  You can smell the salt-tinged air and hear the waves crash against the rocks and the cry of the seagulls.  You can feel the ship cut through the water.  And you wonder where this magnificent ship with two pigeons, a deer and a fox is going.  Another spectacular feature is the texture of the jacket.  It is rough to the touch; like feeling a piece of the side of a wooden ship.  The title text is raised.

Beneath the jacket the book case is a deep sea green with a wide red, cloth spine.  On the front, to the right, is the anchor for the antlered ship.  To the left the ship's helm is pictured.  Each of these is embossed in an even deeper shade of sea green.  On the opening and closing endpapers in shades of brown like an old sea map is the water and land through which the voyagers weave their way.  Readers will enjoy the tiny details and given names for geographic points.

The majority of the illustrations, with the exception of four, span two pages with shifts in perspective to enhance the narrative.  Using graphite and ballpoint pen with digital coloring The Fan Brothers, Eric Fan and Terry Fan, have created truly spectacular illustrations; Marco on a cliff watching the antlered ship enter the harbor, the storm at sea, the reviving stew scene, studying the charts, the terrifying pirate crew, and Marco's search for other foxes and answers.  The passage of time and changes in weather are displayed with beautiful shifts in sky shades.  Humor is found in the smallest elements (Victor the pigeon) and in the page with the pigeons shirking shipboard duties.

One of my many, many favorite illustrations is at night.  On the right against a sky sprinkled with stars is the bow and antlers of the ship.  Sylvia is standing close to the front.  Sitting in the center of the large antlers is Marco gazing toward the left.  Pigeons sit on either side of him.  The other two pigeons are together on a lower, left antler.  To the left of the picture a full moon is rising over a small island.  The moon lights a path on the calm water.


This collaboration between Dashka Slater and The Fan Brothers, The Antlered Ship, is one adventure you want to have repeatedly.  Their journey of discovery, not only in finding what they initially seek, but in forming lasting friendships is a tale to hold in your heart.  And the illustrations will literally have you exclaiming out loud.  You will most definitely want to have a copy of this title on your professional and personal bookshelves.

To learn more about Dashka Slater and The Fan Brothers and their other work please follow the links attached to their names to access their websites.  At the publisher's website you can view several interior illustrations.  Eric and Terry Fan are interviewed at Words for Life and Read and Shine.
Posted by Xena's Mom at 8:56 PM