When you have small children or pets as members of your family (depending on the type of pet, of course) you get in the habit of checking as to their whereabouts before you open any door of your home.  The lure of the outside world is strong.  You would think the music of the Sirens is calling to them.  If they are faster at running through the opening than you are at closing the door, they are soon speeding away like a cheetah.  You imagine them yelling at the top of their lungs, "I'm free! I'm free!"  (If they are little children, they probably are shouting and laughing these very words.) 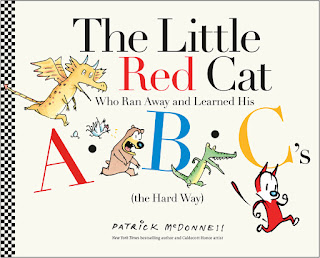 The truth is, sometimes being loose in the world is not an entirely positive experience.  The Little Red Cat Who Ran Away and Learned His A B C's (the Hard Way) (Little, Brown And Company, September 5, 2017) written and illustrated by Patrick McDonnell follows the adventures of a family feline that makes an escape.  As soon as he leaps off the front porch, races down the hill and starts on a straightaway, he realizes he has made a mistake.  Without the benefit of words but with award-winning artwork inviting and prompting a story in our minds, we eagerly turn the pages as our twenty-six letter alphabet dictates the flawless flow of action.

The first frightening encounter is with an alligator and is quickly followed by a meeting with a bear.  As the trio passes a coop, a chicken joins the line of runners.  Not watching as wisely as they should be, they nearly ram a sleeping dragon.  This frightens the chicken so much another runner joins the group.  Can you guess who (what) it is?

Everyone knows what an angry dragon breathes.  This necessitates the five frantic fleeing critters to don protective eyewear.  Now there are six on the move.  One dreams.  Six slip and slide.  After passing through a habitat better suited to primates, they are noticed by royalty.  One of them points to a poster.

As the middle of the alphabet is reached, the six seek new heights, again not paying attention.  Fortunately (Remy Charlip) an invention is handy.  Where are they now?  Do they need a break?  What time of day is it?

As in most tales with a bit of magic, when they least expect it and can hardly take another step, help arrives.  Greetings are given and six are soothed.  A crescent moon shines down, guiding some one way and one little red cat in another direction.  It's been a long day.  There's no place better than one's own bed.


When looking at the opened dust jacket (I am reading the F & G.) you can immediately feel a grin start to form.  That little red cat is most definitely in a bit of trouble.  The design and layout are superb introducing us to the six prominent characters chasing through the title text.  The black and white checks on either side of the spine add a touch of classic to the overall effect.  There is even a tiny little red cat above the Little, Brown And Company logo.

Right after the opening endpapers, Patrick McDonnell begins the story.  Something wakes up the little red cat.  One eye pops open.  (This is just like Mulan who is dead-to-the-world asleep until I open the refrigerator door.)  Spread across two pages an image shows the open front door before the title page text starts.  Opposite the verso, the little red cat runs out the door and across the porch.

The use of white space as an element is exceptional.  This allows for a more stunning effect when it is replaced with snow, trees and vines, and a changing sky color as the day shifts into night.  All of the illustrations with the exception of seven allow a single page for each letter.  The others have larger, two-page pictures for a single letter.  For some of the letters two pages combine two letters in a single image.  You even get to turn the book for a surprising vertical visual.

One of my many, many favorite pictures is for the letter E.  Even thinking about it makes me laugh out loud.  And that's all I'm going to say except this illustration with all the little extra details throughout the title reveals a super sense of humor on the part of Patrick McDonnell.

To discover more about Patrick McDonnell and his other work including his famous Mutts comic strip, follow the two separate links attached to his name to access websites.  Enjoy the book trailer.