Exactly one year ago today a pup with a tail which never stops wagging was born.  Even when she was too small to come home with me, her tail was always wagging.  It wags when she looks out the window.  It even wags when she is sleeping.

It's not just her tail but her entire body which is always on the move.  She lives in the moment ready to romp.  Everything she does she does with her whole heart.

This dog does things none of my dogs have ever done before.  She has the appetite of a goat, eating everything.  She snores as loud as a human.  She watches television, movies and videos on my computer screen.  She stands next to me when I am working in the kitchen.  (It's like I have an assistant.)  When I wake up in the morning, her head is next to mine on the pillow.  There is hardly ever a dull moment in this home. 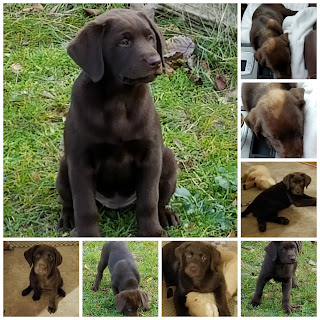 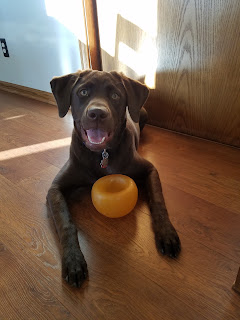 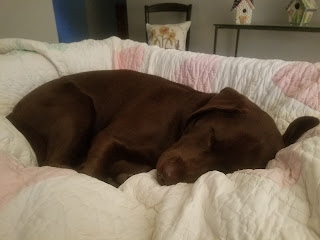 To celebrate her birthday and honor her exuberant personality I am giving away seven picture books, one for each human year of her life.  Most of them are recent publications except for one which is one of my favorite dog picture books. 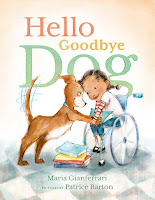 Hello Goodbye Dog (Roaring Brook Press, July 25, 2017) written by Maria Gianferrari with illustrations by Patrice Barton is the story of two hearts full of love, the one for the other. 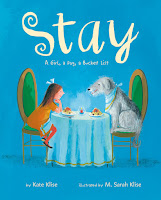 Stay A Girl, a Dog, a Bucket List (Feiwel and Friends, an imprint of Macmillan Publishing Group, LLC, July 18, 2017) is the newest offering by collaborative sisters, Kate Klise and M. Sarah Klise.  It honors the unbreakable bond between a dog and their human.  It honors the beauty of the canine condition. 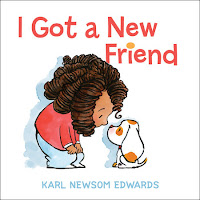 They are the ultimate example of "love at first sight."  I Got a New Friend (Alfred A. Knopf, an imprint of Random House Children's Books, May 23, 2017) written and illustrated by Karl Newsom Edwards celebrates this mutual affection. As soon as you open the book it reaches out and envelopes you.


On January 23, 2017 the American Library Association announced their annual Youth Media Awards in what is one of the premiere events in the children's literature world.  Twenty-one separate categories honor distinguished works and their creators.  One of the categories is the (Theodore Seuss) Geisel Award.  It is given to

the author(s) and illustrator(s) of the most distinguished American book for beginning readers published in English in the United States during the preceding year. 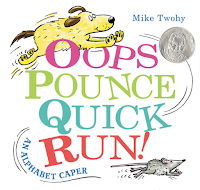 This year there was one award winner and four honor selections.  Of those honor selections I have previously written about The Infamous Ratsos and Good Night Owl.  I did read the winner We Are Growing:  A Mo Willems' Elephant & Piggie Like Reading! Book written and illustrated by Michigan author illustrator Laurie Keller.  It definitely qualifies as one of the most hilarious books of 2016.  Upon reading one of the other honor books, Oops Pounce Quick Run!: An Alphabet Caper (Balzar + Bray, an imprint of HarperCollinsPublishers, February 16, 2016) written and illustrated by Mike Twohy, it's easy to see why the committee gave it notice. 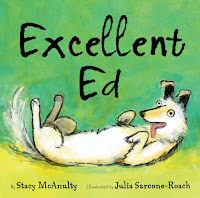 Excellent Ed (Alfred A. Knopf, May 17, 2016) written by Stacy McAnulty with illustrations by Julia Sarcone-Roach is a pooch with a problem.  He's not quite sure how he fits in with the Ellis family. 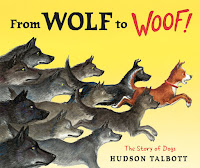 A dog's heart is huge; filled to the brim with unconditional love.  As humans we can only strive toward the love they have perfected so well.  They ask for little but give much. 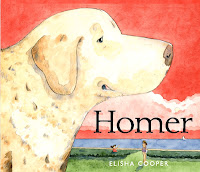 When opening the front and back covers of Elisha Cooper's new book, Homer (Greenwillow Books, May 29, 2012), eyes moving from left to right across the two-page spread, we see the body of a yellow lab, soulfully gazing forward, a half smile playing about his mouth.  Above the curve of his back we read, Have you ever loved a dog? One day in the life of Homer has a great deal to tell readers.