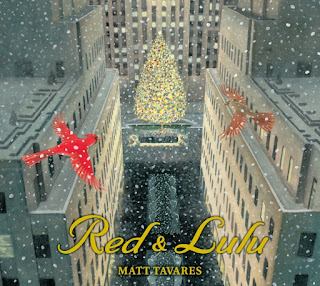 Eleven days ago author illustrator Matt Tavares posted a photo and comment on Facebook about stepping into a hotel elevator with portraits of cardinals hanging on the wall.  It was his first event promoting his new book, Red & Lulu (Candlewick Press, September 19, 2017).  We had a short chat about "signs" but what I didn't tell Matt at the time was cardinals were my Mom's favorite bird.  Each year it became a tradition to buy her a new cardinal ornament for her Christmas tree.  My mother had red hair and all her friends including my father called her Red.  This enchanting title will resonate with readers for varied reasons but for all it lifts up the power of love and the hope of a miracle.

In the front yard of a little house, on the branches of a mighty evergreen, there lived a happy pair of cardinals.

This tree offered them all they needed during spring, summer, autumn and winter.  They preferred winter over the other seasons because the family living in the little house decorated the tree with colored lights.  They sat and listened to

Do you think the carolers heard them joining their chorus?

On an early morning before autumn turned to winter Red left to find food for him and Lulu, who waited in the tree.  As he returned he was shocked by the sight before him.  The tree was on its side on a truck.  Lulu was softly singing inside the branches.

As the truck sped down the road, Red called to Lulu.  He would not leave her.  He tried to keep up but the truck was too fast.  He lost sight of the truck, tree and no longer heard Lulu's song as it headed toward a vast city.  Red was in a place in stark contrast to the yard of the little house where the tree had stood.

The noise and buildings nearly overwhelmed the exhausted cardinal as he searched for Lulu day after day.  When the snow started to fall, the ache of her absence grew stronger.  He felt so connected to her he thought he heard their winter song.  Joy flooded the brave bird's body.  He flew and flew and stopped, stunned.  Lights.  Love.  And ...


When an author begins a story prior to the title page they are inviting you into something extraordinary.  With a single sentence Matt Tavares gives us once upon a time.  He continues to explain the contentment Red and Lulu find living in that particular tree all year long.  In this way, he creates a bond between readers and the pair of birds.  We understand the value of home and lasting companionship.  In this respect we feel the same alarm as Red when the tree is moved with Lulu in its branches and when he can't keep up with the truck.  But...

Matt has also fashioned a cherished tradition the duo share during their cherished season of the year.  This is the kind of hope on which their relationship flourishes.  Here is a sample passage.

Red chirped frantically,
telling Lulu to stay
right where she was,

telling her that he
would be right there.


When viewing the opened dust jacket (I have an F & G.) the front view is striking.  The panoramic view as seen by Red and Lulu transports us to New York City at Christmas.  We, like the two birds, are drawn to the tree.  To the left, on the back, the affection between Red and Lulu is presented by Matt Tavares by taking us inside the tree.  Red and Lulu are resting on branches as the Christmas lights twinkle.  It is a smaller, more intimate image in an oval surrounded by a pale green canvas.  The opening and closing endpapers are a muted cardinal red.

Prior to the title page we see one of the children, dressed in winter garb, filling a feeder hanging from the roof.  The large evergreen looms to the right.  Everything is frosted in a thick layer of snow.  The title page, like the front of the dust jacket, is a marvelous sweeping view but instead of the city, it's of the community where the little house is located.  The two birds fly near their names, the title, on the left.  The large tree rises between Matt's name and Candlewick Press on the right.

Rendered in watercolor and gouache the illustrations have a limited but natural color palette.    They vary in size to provide perfect pacing. Some are framed in a generous amount of white and others flow edge to edge.  Many of them are wordless which allows for more active participation by the reader and assists in furthering our emotional attachment to the story and Red and Lulu.

With a pair of cardinals as the main characters readers are treated to numerous birds-eye-view pictures but we are also taken deep into the story with shifted perspectives.  Matt knows exactly when to make this change.  We move in close when Lulu is frightened by the tree's move, Red is flying along a city street between the legs of walkers, or when he hears a sound close to his heart.

Several other items of note are the luminosity present in each picture.  It's not just the lights but an overall glow suggestive of warmth.  Careful readers will recognize some of the skaters at the Rockefeller Center rink.  And as he did in the beginning, Matt closes the story with an extra page, the possibility of another tale.

One of my many, many favorite pictures is on a single page.  The point of view has changed to bring us close to Red.  He's flying in the city at night as snow falls.  Behind him buildings stretch on either side, windows glowing from the lights.  Street and vehicle lights shimmer.  He is not looking directly at the reader but off ahead.  His body is moving with intent.  His feathers are a vivid contrast to the night, lights and snow.


As soon as I finish reading the story, look at the final two pictures, read the author's note about The Rockefeller Center Christmas Tree and view the image on the publication page, I go back to the start of Red & Lulu written and illustrated by Matt Tavares and read it again.  You are completely captivated by it because it rests in truth.  The blend of Matt's words and artwork has a timeless quality.  You will want to have at least one copy on your professional bookshelves as well as your personal bookshelves. (It's all I can do to not read it aloud to all the classes this week but I will wait for the finished copy and a time nearer to November.)

To learn more about Matt Tavares and his other work please follow the links attached to his name to access his website and blog.  Matt has several interior illustrations you can view on his website.  Matt is interviewed on a Candlewick Press podcast.  The cover is revealed at Mile High Reading hosted by the director of the Plum Creek Children's Literacy Festival Dylan Teut.  The book trailer is revealed at Watch. Connect. Read. by Scholastic's Ambassador of School Libraries, John Schumacher.  At the cover reveal and the book trailer premiere there are interviews.

UPDATE:  On October 4, 2017 and October 6, 2017 Matt Tavares added two posts to his blog about items he hopes we notice in his book and a last minute change he made.

UPDATE:  On December 7, 2017 Matt Tavares chats with author, reviewer and blogger Julie Danielson at Kirkus. As a follow-up to that conversation Julie Danielson hosts Matt on her blog, Seven Impossible Things Before Breakfast on December 14, 2017.
Posted by Xena's Mom at 1:15 AM