In all honesty there are people who have never been bored.  Most moments of their lives are filled with doing something at all times.  They were probably raised by parents who rarely rested when working or playing.  Even if these parents were big readers, reading was to be enjoyed after everything else was completed.  (These people raised by these parents might have had to hide to continue or finish a completely captivating book.) 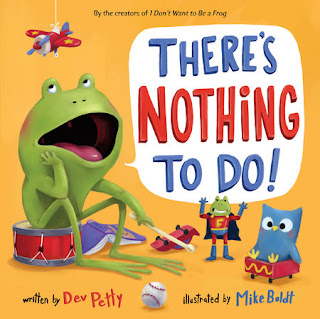 And it goes without saying, these people would never admit to having unfulfilled free time because those parents would produce a never ending to-do list.  There's Nothing To Do! (Doubleday Books for Young Readers, an imprint of Random House Children's Books, September 19, 2017) written by Dev Petty with illustrations by Mike Boldt is a new companion title to I Don't Want To Be A Frog and I Don't Want To Be Big.  The young frog who has brought laughter to readers repeatedly seems to be at a loss with how to spend his time.  Clearly his dad is not like some parents we might know.

I don't know what to do today.

You can't think of
anything?

It's not that our likeable amphibian can't think of a single thing, he just chooses not to do any of them.  After three suggestions of possibilities by his dad which Frog has no desire to follow, he decides to check with his friends.  Perhaps they will recommend something more appealing.

Rabbit wants to hop and then stop.  When he stops, his next activity is not at all what Frog wants to do.  Cat's proposal is downright yucky.  Frog and Owl are at complete odds.  When Frog approaches Pig he has several thoughts, one involving mud and the other a list.  Frog is not impressed.

Despairing of discovering anything to do, Frog rests flat on his back.  The day is nearly over.  Suddenly a new face appears, leaning over Frog. Her thoughts are in direct contrast to all the advice Frog has received.

She and Frog practice.  They wait.  As the sun sets Frog has a revelation.  When he and his dad chat at the day's end, Frog shares his grand plan for tomorrow.  There is one little problem, though.  What will Frog do?


By telling the entire story in dialogue Dev Petty personally involves readers in Frog's current dilemma.  With each proposed pastime and Frog's reply we realize his frustration is growing.  What is good for one individual is not always a good fit for another.  This builds toward the final idea; an idea not just for Frog but for all readers.  What makes this story even more memorable is the delightful twist Dev inserts at the end.  Here is a sample conversation.

Rabbit, what
should we do today?

Hope around in
circles and then ...

This is even less
fun than it looks.


There is something about the expression on Frog's face on the matching dust jacket and book case which sparks giggles and grins.  His words, the book's title, are in direct contrast to the toys surrounding him.  You can feel the comedic effect start to bubble inside you.  To the left, on the back, Frog maintains his commentary as the two previous books are shown.  When he points to the ISBN and asks

you have to smile.  (When you are reading this aloud, this is a super opportunity to talk about the ISBN.)

The opening and closing endpapers in pale blue highlight Frog first in six boring poses and second in six alternate pursuits guaranteed to generate happiness.  The title page is nearly identical to the front of the jacket and case but Frog is walking away with his arms in the air in a sign of exasperation.  Throughout the book the background colors are varied; pale blue, white, darker blue, purple, pale yellow, pale green and golden shades of a blazing sunset.  The vibrant primary colors placed on those canvases by illustrator Mike Boldt add extra exuberance to the illustrations.

It's not just Frog's facial looks which will cause hilarity but on all the characters' faces.  The inclusion of extra details increase the humor and ask us to stop and enjoy the moments.  Notice the words on Dad's crossword puzzle, Dad's attire when he proposes a swim, Pig's latest project, and Rabbit's crinkled whiskers.  The size of the illustrations, single page and three double-page pictures elevate the pacing.

One of my favorite pictures of several is on a single page.  Frog and his dad are talking.  When his dad asks him what Pig is doing, Frog yawns and replies

Frog is leaning against a Popsicle stick replica of the Eiffel Tower being glued together by Pig.


In There's Nothing To Do! written by Dev Petty with illustrations by Mike Boldt is full of the fun we have come to love about Frog, his dad and the other animals in his world.  The mix of words and images is energetic and lasting.  Readers won't want to miss this third title.  You'll want to have a copy on your personal and professional bookshelves.

To learn more about Dev Petty and Mike Boldt and their other work please follow the links attached to their names to access their websites.  Get a peek inside at the publisher's website.  Mike Boldt has a guest post on PictureBookBuilders about this title.  You're going to enjoy the artwork.