Toying With The Truth

About ten years ago I got a real solid lesson in things are not always what they appear to be.  I had been working in my gardens in front and was moving to one side of the house.  As I looked in the grass, I saw a large stick about three feet in length. I remember thinking, "How did that get there?" When I got closer I yelped; it was the biggest garter snake I had ever seen.  I'm not sure, of the two of us, who was more frightened. 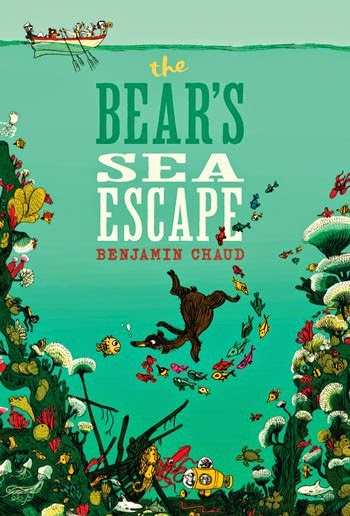 One of the cutest father and son teams of 2013 first introduced to readers in The Bear's Song, have returned in a companion title, The Bear's Sea Escape (Chronicle Books).  Author illustrator Benjamin Chaud has the two still searching; first for one thing, then for each other.  It's an adventure worth following, every page of the way.

High atop the opera house with snowflakes falling fast, Papa Bear and his cub snuffle their snouts up through the snow. "We can't stay here!" Papa Bear grumbles.  "This is no place for a nice long nap."

Swiftly moving over city rooftops the duo discover a way inside what they believe to be the ultimate hibernation home, a boutique for teddy bears located in a large, multi-floored shopping center.  A youthful shopper notices Little Bear believing him to be the best toy bear in the world.  Before the two dozing bears are aware the cub is being whisked away as an additional member on a family vacation.

Shocked to realize Little Bear is no longer sleeping next to him, Papa Bears gives chase.  On a scooter through city streets, hanging on to the caboose of a train and grasping a box being loaded on board a cruise ship, a father follows his son.  It is no easy task to locate the wee one on this immense vessel.  Where oh where is Little Bear?

Cavorting to a conga masked merrymakers snag Papa Bear, luring him into their line.  Suddenly over the happy hullabaloo, a sound is heard.  This boisterous blast is known to only two.  Sweet dreams on a balmy beach are in the offing.


Using words which replicate the rhythm of an action-packed treasure (Little Bear) hunting trek, Benjamin Chaud takes his readers on this jolly jaunt.  We weave through a people-packed street, train station, boat, beach and jungle resort not to mention taking a dive in the underwater world.  Every two, three or four sentence group links us to the next with a pleasurable pause.  Here is a single sample.

Perhaps Little Bear went for a swim?  Papa Bear dives into the sea to explore for himself.
"Have you seen my Little Bear?" he asks a puzzled puffer fish.  The reef is brimming with bubbles and barnacles, scales and seaweed, but there is no sign of fluffy brown fur for as far as the eye can see!

Benjamin Chaud prefaces his story with a matching dust jacket and book case using a vibrant color palette in shades of deep blue-green, red, gold and black.  On the front we are treated to an image similar to one of the interior illustrations.  On the back, to our left, he extends and closes the story with a small oval picture of Papa Bear, pink flowered lei around his neck and a blossom on his head, sleeping beneath a palm tree.  Baby Bear wearing his party costume, holding a ukulele, is resting peacefully on his big belly.  The identical gold and cream opening and closing endpapers in a scroll pattern supply the background for a tiny blue hummingbird.

Turning a page we see Papa Bear and Little Bear popping up out of the snow beneath the title.  All of the twelve double-page visuals are loaded with numerous exquisite details; a mix of realism and myth and a blend of urban with the wild.  You can spy a fox running through the city, penguins frolicking on board the cruise ship, a mermaid swimming by a submarine and yes...a yeti and a dodo bird on the beach.  You can literally spend hours looking at each illustration; first to locate Papa Bear and Little Bear and second to find all the other goodies tucked into each one.  As in the first title Chaud's playful pictures are full of fun.

I think my favorite illustration is the cross-section of the ship.  You get a real feel for Chaud's ability to include other tiny tales within his overall narrative.  Each room or section contains small individual parts of the larger whole.  I can't help grinning at the stubborn horse in one room or the penguins "chatting" in the hallway as one of their other friends takes a dip in the ship's pool with the human swimmers.


I have always been a firm believer in the saying "a book is a present you can open again and again" but The Bear's Sea Escape written and illustrated by Benjamin Chaud features new stories every time you look at one of the illustrations.  I sure hope more escapades highlighting these two characters are in the works.  If excellence is in the details, this title is a blue ribbon winner.

I sincerely enjoyed reading this post, Benjamin Chaud: You Know Him. You Just Don't Know You Know Him, by New York Public Library's Youth Materials Collection Specialist and blogger at A Fuse #8 Production, Elizabeth Bird.  The book trailer below is in French but gives you a great peek at the book.