Over And Under The Ice

Once the temperatures were consistently below freezing and snow had fallen, all the neighborhood kids knew what would happen.  The caretakers of the nearby park would start to make a skating pond.  I know every single child for blocks around was including Jack Frost in their prayers at night, hoping he would work his magic to make the layers of water freeze faster. 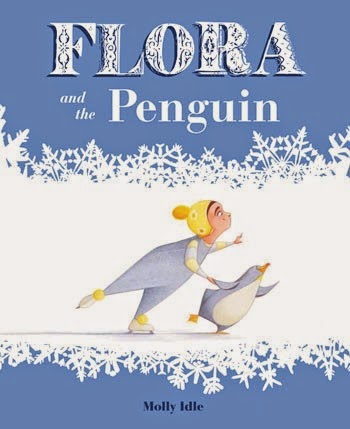 When the rink was ready some would play games of hockey using whatever was available for a puck, others wove over the ice in endless challenges of crack-the-whip or a few dreamed of dancing in swirling figure eights before an admiring crowd.  We loved skating on that pond.   Molly Idle's gregarious gal first acquainted with readers in her 2014 Caldecott Honor winning title, Flora and the Flamingo, has returned.  Donning a pair of skates she glides over the ice in Flora and the Penguin (Chronicle Books, September 30, 2014).

In silence, without words, the story is told; beginning with a single two-page illustration including the title.  Flora is walking across a section of ice, her skates over her shoulder, as she eyes a hole in the ice.  We are able to see the water underneath the frozen landscape.

Putting on her skates, still watching the hole, she is rewarded, as are we, with the sight of a beak tip.  We know it's a penguin.  A few fish are swimming from the page edges toward the center.

As the penguin emerges from the water a greeting is given.  The two join hands, partners in a graceful dance, moving to a melody only they know.  As they change directions so do the two large schools of fish now present.  When we lift the first flap we see the pair in perfect synchronization as they face away from us.

As their bodies leap and stretch, the fish are performing in a figure eight formation.  With laughter on her face, Flora is blissfully unaware of every single fish shifting as a unit toward the opening.  Apparently with some instinctual gift, the penguin knows, diving through the hole in hot pursuit.  On the top of the ice flaps show Flora's disappointment at the loss of her companion.  Beneath the ice, the penguin is not giving up the chase.

Pleased as punch, the penguin pops back up to the surface with a single fish; presenting it to Flora as a token of friendship.  With a flippant fling, she tosses it back through the hole.  The penguin is aghast.  The pair is not pleased with each other but Flora, perhaps from her own experiences in the first book, realizes the need to make amends.  Heart and head working together, her inventive plan gains more than one catch of the day.


When I unfolded the dust jacket Molly Idle's design seen on the front, the wide strip edged in snowflakes, continues to both flap edges.  Flora and her penguin friend are joyously skating to the right on the front.  The reverse is featured on the back.  Beneath the jacket the book case is a frosty white with only two small illustrations.  On the right the penguin is peering out of his hole.  It's bottoms up on the left.  The bright golden yellow hues cover both sets of endpapers.

In this title the white, rather than acting as a canvas as it did to highlight Flora and the flamingo, becomes an element directly influencing the overall atmosphere of ice and snow.  Rendered in colored pencils with the limited color palette, simplicity in design and delicate details create sheer eloquence.  Each flap, carefully placed, heightens the narrative's progression and emotions.

I've turned the pages again and again as well as each flap, finding it hard to select a favorite.  Everything flows flawlessly; so connected as to be one solid whole.  I really enjoy the sequence of illustrations when Flora and the penguin are together again, working to correct her mistake.  It says a lot when the penguin joins her rather quickly.


Like a blade on the ice, Flora and the Penguin conceived and illustrated by Molly Idle will skate its way right into your heart.  Hand this to readers who like participating in stories with the tactile experience of lifting flaps and readers who love penguins, skating and friendships.  You are going to love dancing with Flora and her pal as much as you did the very first time.  It's simply glorious.


If you are interested in learning more about Molly Idle and her work, please follow the link attached to her name taking you to her website and blog.  Here is a recent interview she did at Seven Impossible Things Before Breakfast hosted by Julie Danielson.  A Q & A with Molly Idle about this title and her work in general appeared a little later in Publishers Weekly.  Teacher librarian extraordinaire, John Schumacher, premiered the book trailer (and much more) at his blog, Watch. Connect. Read.  At the publisher's website they have included two illustrations with the flaps for your viewing.  Molly Idle chats with Matthew C. Winner, a special teacher librarian, on his Let's Get Busy podcast.
Posted by Xena's Mom at 12:00 AM