Taming Of The Wild West

The story area is filled with boys and girls restlessly waiting.  The teller strides in; the heels of her boots thudding across the floor.  Sitting squarely on her head is a well-loved Stetson, pulled down a tad bit on her forehead.  Around her neck a large kerchief hangs low but not so low as to cover the shiny sheriff badge fastened to her vest.  Black jeans and a button-down chambray shirt complete her outfit. 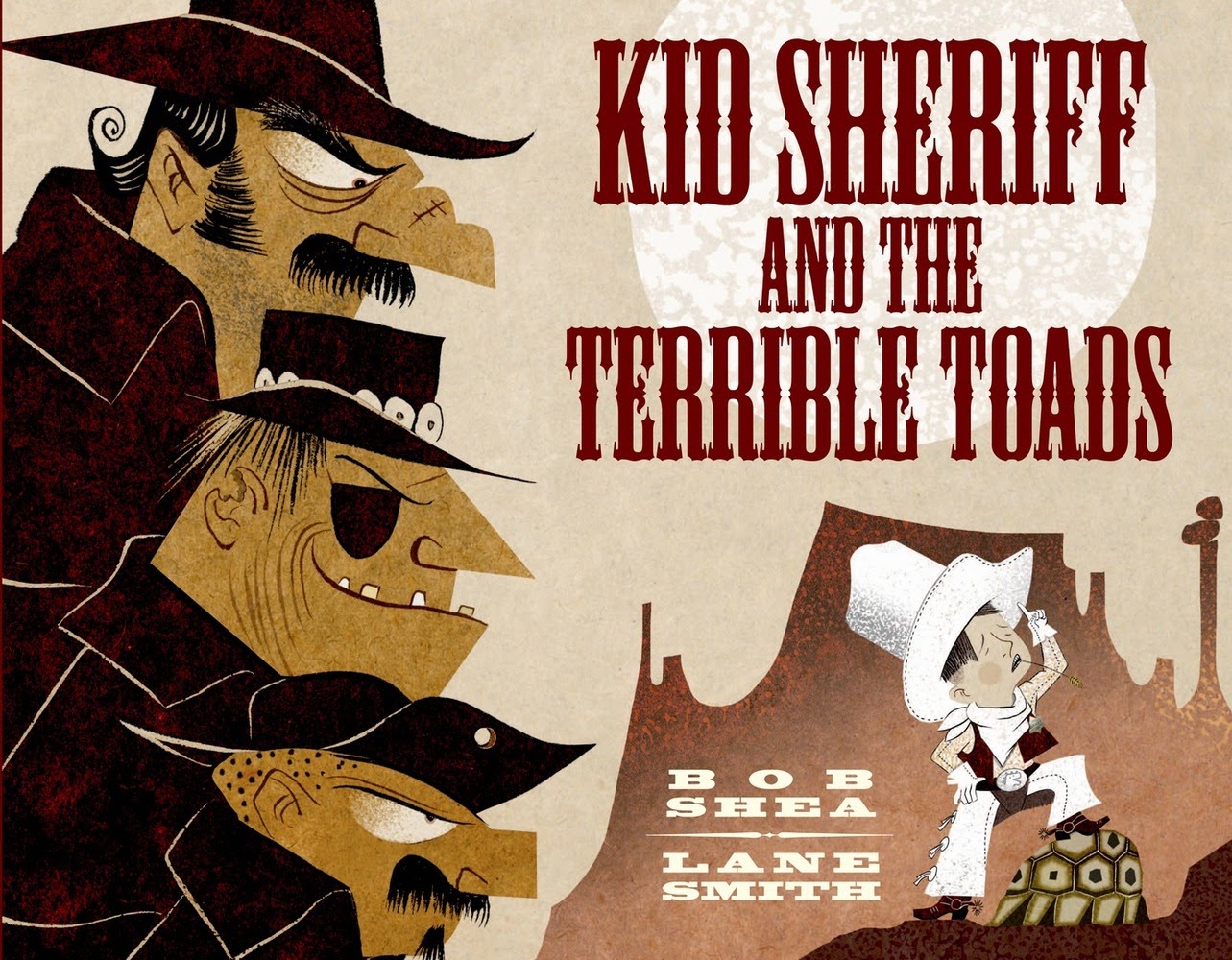 Pausing she looks each member of the audience straight in the eyes.  "Are you ready to hear a story that is going to knock your socks off?" she yells out.  After shouted replies of "Yes!" she settles down to begin Kid Sheriff And The Terrible Toads (Roaring Brook Press) written by Bob Shea with illustrations by Lane Smith.  "Wait a minute", one child says.  "Did you say terrible toads?"  "That I did", she replies. "They're so horrible people in town are quivering in fear."  Silence fills the room.

Drywater Gulch had a toad problem.

Now you might think the narrator is talking about the amphibious creatures of land and water.  If so, your thinking would be mistaken.  These toads begin with a capital T as in the Toad brothers; three of the nastiest varmints walking the West.

Mayor McMuffin is beside himself with worry.  Who knows what treasure will be taken, livestock smooched or chili slighted when they strike next?  But...wait a minute...someone is riding into town...someone riding on a tortoise.

When the mayor greets and questions the stranger, he finds himself in the presence of their new sheriff.  Of course the only skill at which the youngster excels is his vast expertise on dinosaurs.  In the next moment a resounding

Robberies are happening left and right.  As Kid Sheriff starts tacking up wanted posters, minus the Toad trio's portraits but featuring a variety of prehistoric land giants, the criminals appear voicing their complaints.

didn't commit those crimes.  Misters Mean, Weird and Ugly want credit given where credit is due.

The lawman matter-of-factly continues preparations for the detainment of the dastardly reptiles.  Three outraged, sputtering outlaws make a serious error in what little judgment they possess.  You never know when a passion for dinosaurs will save the day.

Bob Shea really understands kids and he loves making books for them.  It's obvious with every single word chosen and sentence written in this book.  He has the teller of this tall tale speaking precisely as much as necessary in the beginning before his crisp dialogue laden with the language of the locale picks up the story.  A single sentence spoken by the original voice concludes the book brilliantly.  Here is a short sample.


From the minute you open the matching dust jacket and book case, you will be hard pressed to not burst out laughing.  (The best part is the whole book is like this.) On the left you have the three outlaws stacked together sneering at our young hero clad in white, boot resting on his trusty stead...er...tortoise.  On the back Kid Sheriff is riding into town across a desert scene on top of his four-footed, shelled pal.  Plain warm brown opening and closing endpapers continue the thematic color palette used throughout of rich browns, reds, deep golden yellows, black and cream.  It's like looking at an old photograph album filled with sepia-tone pictures.

Lane Smith fills single pages, double pages and crosses the gutter with his images without borders.  The layout of each visual gives readers a true feel not only for the story but the place in which it is set. The prominent elements in each picture are bolder and darker with those in the background lighter.  I can only imagine how much fun he had adding all the historic details; those more noticeable like the clothing and buildings or those much smaller like the stolen money.  Be sure to notice Kid Sheriff's belt buckle.

One of my favorite illustrations is when Kid Sheriff is measuring the size of the doorway into the jail.  He is holding one end of the tape and his tortoise is holding the other end.  We readers are seeing this through three sets of legs; those of the terrible Toad brothers.  The perspective is fantastic.


Kid Sheriff And The Terrible Toads written by Bob Shea with illustrations by Lane Smith is a rootin' tootin' rip-roaring outrageously fun read.  No matter how many times I've read this, I still laugh out loud with the line stated as Kid Sheriff comes into town and when he and the mayor are engaged in their original question and answer conversation.  So step back into the Wild West created by this dynamic collaborative team and get ready for your children to beg you to read this over and over again.

For more information about either Bob Shea or Lane Smith, follow the links embedded in their names to access their websites.  Hilarity ensues in this Q & A with Bob Shea and Lane Smith at Publishers Weekly about this title.  Follow this link to the publisher's website to view more illustrations including a portion of my favorite.  At Watch. Connect. Read. hosted by teacher librarian John Schumacher, Lane Smith is interviewed.  He talks about his process in creating the illustrations for this book.  Bob Shea was a guest interviewee at educator Colby Sharp's blog, sharpread.  Then head on over to the Nerdy Book Club to read Bob Shea's guest post, Stop what you are doing right now, and burn all your books. (Or how to tell if a picture book is good simply by reading it).