The Gift Of One Small Thing

It's accepted that technology has given us the means to bridge many gaps in our understanding of other people's day to day experiences, where they live and work, and the customs and cultures which define them.  Even more valuable is face to face conversations with those individuals.  In 1995 a group, LATTICE (Linking All Types Of Teachers To International Cross-Cultural Education), was founded by esteemed educator Sally McClintock.  Membership was/is comprised of school districts in mid-Michigan, Michigan State University, international graduate school students/scholars at Michigan State University, and community members.

At its inception there were only two school districts participating.  My district was one of them. Being invited to join others in this program was an honor and an invaluable experience.  I will never forget it.  Among the most vivid recollections is sitting and listening to people talk about the Rwandan genocide. 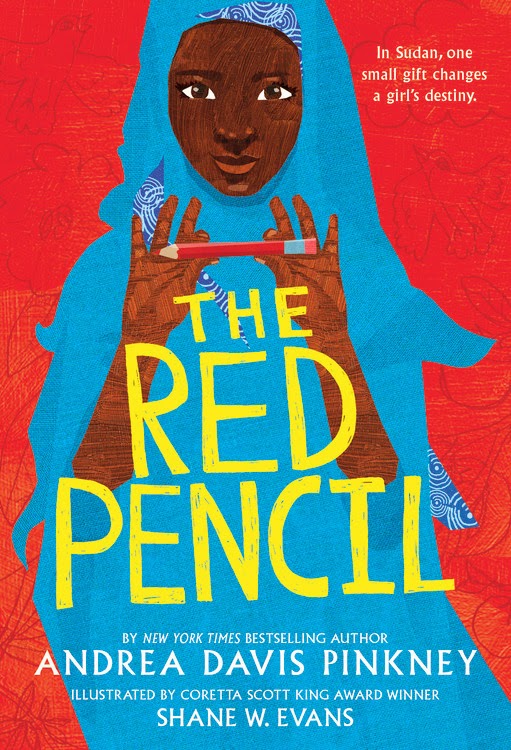 Likewise if a book is written and illustrated based upon abundant research and personal interviews, readers can begin to grasp the staggering impact of events on the lives of those persons involved.  The Red Pencil (Little, Brown and Company, September 16, 2014) written by Andrea Davis Pinkney with illustrations by Shane W. Evans, a novel in verse, focuses on the experiences of a twelve year old girl caught in the conflict in Darfur, Sudan, Africa.  This region remains in a state of humanitarian crisis.

As soon as I wake,
Muma whispers a birthday wish,

"Blessings for all the years to come, Amira."

My mother has been awake for hours,
starting early with farm chores.

On this birthday morning
bright
as the sun's first yawn,
ripened wheat
sways.

Its golden braids
are woven with the promise
of a hearty harvest.

Amira, her younger sister Leila, Dando, her father, and Muma, her mother, are one family of many in a village of farmers.  Leila, though physically handicapped, is gifted at making up songs and determined to be no different than any other little girl particularly when it comes to activities with other children, especially Gamal.  Dando, grower of extraordinary tomatoes, is a shining light in Amira's life as she is in his.  He and she play a game,

What Else Is Possible?

seeking to find the brightness in all things.  Muma sees only tradition; one path to follow for girls, work, marriage and children.  Another important member of their extended family is Dando's longtime friend, Old Anwar, a chief competitor in the campaign for growing the finest tomatoes.

Now picture if you can days filled with chores like raking cow plop, chopping vegetables for a one pot meal, walking miles for water and tending sheep. Interspersed among these weekly routines is the joy of a newly sharped twig from Dando to use in making her sand pictures, the noise of waking the moon, the fear of possible attack by Janjaweed, the government military, the sadness of her friend's family leaving and the thrill of a new lamb's birth.  There is also hope from an overheard conversation; Dando and Old Anwar know Amira is destined for a different life than tradition demands.

Realized terror sends a new family unit, Amira, Leila, Muma, Old Anwar and Gamal moving away from the only home she has ever known to somewhere she has never been.  Traveling by night for safety and despite gnawing hunger, lips and throats parched by thirst, feet raw from walking and aching limbs, they succeed in finding safety after days and days and days, so many Amira loses track.  But this place, this place of houses with no walls other than pieces of rice bags and root roofs, this place a sanctuary for thousands, is a hollow shell of existence.  Sadness has replaced air filling everyone's lungs as they breathe in and out.  This is Kalma.

In response to what she has seen and endured Amira stops speaking; her voice hidden deep inside.  A new normal replaces the old; oil covering skin to protect from the mosquitoes, hedgehog observations, lines for water rationing, tin-can soccer, released grief and desperation.  Coming to the camp a woman looks into Amira's eyes and sees, a gift of a red pencil and yellow tablet with blue lines begins the healing for this twelve-year-old girl.  She and Old Anwar share secrets; an old hope growing again, like the extraordinary tomatoes of her father, Dando.


Poem by poem the words of Andrea Davis Pinkney bind us closer and closer to Amira and the other characters in this work.  By describing cherished ordinary incidents, little glimpses into their relationships, we come to understand them as completely human.  We feel deeply moved to be a part of their simple lives.  Throughout Pinkney's pacing is like a heartbeat, reflecting the emotions of a moment.

Details, lyrically portrayed, of places draw us into the story, into the landscape of the Sudan.  It's easy to feel as though we have been transported back in time; to become a member of Amira's family.  Our senses are one with hers.  Here are a few sample phrases and a single poem.


Little Leila fought her way into this world.
She was born on a night
when the moon had tucked itself
into the sky's deepest pockets. ...

FOOTPRINTS
I pretend
Dando is walking alongside me,
holding my hand,
helping me through this.

I pretend
to see his footprints,
long,
shaped like flattened leaves,
marking the sand,
setting down a path
for my own small
feet
to follow.

I pretend
so, so hard,
with my whole
heart.


The artwork of Shane W. Evans pairs exquisitely with the text of Pinkney, a visual extension.  Light, fine lines with soft shading mirror the place in which the story is set.  The illustrations are never an intrusion but a compliment varying in size and placement like sketches in a journal.   It's not as if he drew the pictures but Amira was the artist.  Evans knows her soul.

One of my favorite visuals takes up the lower two-thirds of a page.  Their beloved sheep Nali is pregnant.  Amira and her mother are reaching from behind her, standing next to one another, to feel the movement of the lamb in her belly.  It's magical.


I came to the reading of this book with no expectations other than a faint buzzing on social media. But because The Red Pencil by Andrea Davis Pinkney with illustrations by Shane W. Evans, though fictional, is vested in truth, I was genuinely touched over and over.  I could not put it down once I started; needing to know the fate of Amira and her family.  This is a very important book.  Make sure it is in every collection.

Update:  Andrea Davis Pinkney is the guest blogger at Nerdy Book Club on October 21, 2014.  The post is titled Finding The Red Pencil.

Update:  Andrea Davis Pinkney has an educator's guide for her book now.
Posted by Xena's Mom at 9:29 PM