Put A Hold On Hibernation

There is only one more thing which tests the bonds of friendship as much as time; distance can make it tricky to maintain a relationship.  When you take away the ability to Skype, text, tweet, send a message on a social network or via email, this leaves you keeping your connections alive through letters.  When writing, words need to be carefully chosen so any reading between the lines conveys the right sentiment. 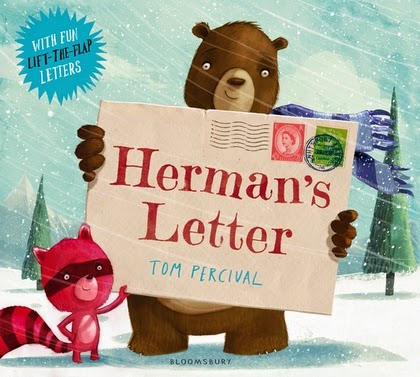 Sometimes the promises made between friends are hard to keep.  Herman's Letter (Bloomsbury, November 11, 2014) written and illustrated by Tom Percival poses the perennial problem between friends of one moving away from the other.  Missing someone is different for everyone, isn't it?

Herman and Henry had been
best friends for as long as
anyone could remember.

Herman is a big brown bear.  Henry is a pink...yes pink...raccoon.  As long as anyone can remember means all the way back to birth.  That's a long time to be friends.

They master game playing, form an exclusive club and devise a TOP SECRET handshake.  It looks like nothing is going to change their wonderful days together until Henry moves far, far away. They, of course, will write letters and pledge to be best friends always.

When Henry's first letter arrives Herman is not so sure Henry misses him as much as he misses Henry.  Herman focuses on one particular part in the letter instead of the other sentences written by his raccoon buddy.  The green-eyed monster is threatening to take up residence in Herman's heart.  With every cheerful letter from Henry, the bear sinks farther and farther into loneliness.

As spring, summer and fall pass, Herman finds himself getting ready for his winter nap.  Settling into his favorite chair ready to drift off to dreamland, he is startled by a familiar sound.  A letter has been delivered.  It's from Henry!

Herman is overjoyed with the words he reads.  Penning a reply to his pal he hurries out to put it in the forest mailbox.  What?!  How can it be closed for the winter?  If Herman wants Henry to get this letter there is only one thing he can do.

Drifts are getting deeper.  Winds are howling.  Temperatures turn everything icy.  Herman is far, far away from home and hibernation.  A suitcase gone wild spells trouble for Herman.  Will the mail go through?


The friendship of Herman and Henry is laid before us in the first expressive four sentences. Tom Percival knows the importance of shared laughter and playful memories in joining two beings together.  With each letter and the matching narrative after Henry moves, Percival heightens Herman's despair laying the foundation for total elation when the final letter is received.  It also makes perfect sense for the ensuing trek but he doesn't let us rest, providing the final two twists.


Upon opening the book case readers are treated to a two page illustration with letters as the background for the title and story line promotion.  One of the interior photographs used to portray Herman's and Henry's friendship is attached to the back letter with tape as if in a scrapbook.  While the cover shows winter as the season, the story begins in spring as shown on the initial title page.  The formal title page and verso are a collage of photographs of Henry and Herman and letters.

Alternating the illustrations' sizes and the number on each page or across two pages compliments the rhythm of the narrative and the lift-the-flap letters.  Full color pictures, with the weather and the background colors depicting moods, provide splendid pacing especially in the sequence of smaller images as Herman travels.  Of importance is the insertion of humor to maintain the faithfulness of the hopeful story line; Herman standing in the rain over a smoking barbecue, the words Oh bother in a speech balloon as Herman stands on a mountain range peak and results of the suitcase ride.

One of my favorite illustrations takes place in the springtime.  Herman and Henry are wearing appropriate pirate garb sitting in their tree house which looks like a ship on the ocean blue.  Henry is looking for bounty with a spyglass as Herman sips a cool drink.  It illustrates the phrase

Everything was just perfect...


Who doesn't like to get letters?  Who doesn't like to interact with a book by opening and closing written greetings? Herman's Letter written and illustrated by Tom Percival will be a hit with readers who need to see how moving away may challenge a relationship but true friendship does last forever...even across the miles and through hibernation.  I would pair this book with Sergio Ruzzier's newest title, A Letter For Leo, Dear Mrs. LaRue: Letters from Obedience School by Mark Teague (first of a series) or the classic The Jolly Postman or Other People's Letters by Janet and Allan Ahlberg.

For a little bit more information about Tom Percival follow the link to his website embedded in his name.  John Schumacher, teacher librarian extraordinaire, interviews Percival on his blog, Watch. Connect. Read.  An eight page activity kit has been developed by the publisher.  Enjoy the videos below.