It All Started With...

There is no need to say it aloud.  You can begin with a whisper.  It's like an "on" switch for laughter with kids.  You know the word I mean.  Underwear. 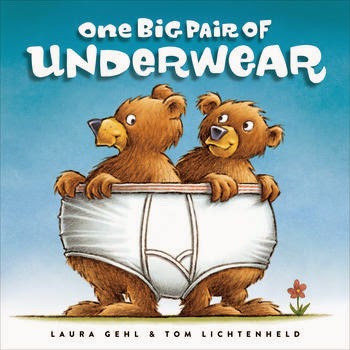 If that word appears in a book title, it's like a homing device, a true attention getter.  Without a doubt One Big Pair Of Underwear (Beach Lane Books, September 9, 2014), words written by Laura Gehl, pictures made by Tom Lichtenheld, will attract guys and gals like honey does bees.  Once they start reading it, they are in for an even bigger treat.

ONE big pair of underwear.
TWO brown bears who hate to share.
ONE bear wears the underwear.

Already something is not quite right.  Someone has one, the other has none.  With a page turn and a glance to the right, two sacks of salty snacks get noticed by three young yaks who are wearing black backpacks.

Guess what?  We now have one very unhappy snackless yak.  The pattern continues with stealing seals, greedy goats, and napping cats.  Each time one member of the group, whose numbers continue to grow by one, is left wanting what they others have.

There aren't enough cookbooks, jet skis, sticks or trombones.  A hippo is harrumphing, a cow is crying, a duck is downcast and a baboon is baffled.  Clearly these critters are missing a key component, a valuable life lesson.

As if it isn't bad enough already,

come into view.  Twenty, not ten, pigs want to glide down those slides.  I don't think this is going to end well because pigs are...well...pigs.

Readers are in for a jolly jolt as those pigs show how dividing is done.  Two bears, one wearing underwear, take note.  Strike up the band!  It's a parade of possibilities.


Laura Gehl's love of words is evident in her debut picture book.  Alliteration and rhyme mix and match on each and every page.  Adjective descriptors introduce things, animals and actions as the final word in each phrase creates a rhythm within the foursome.  Here is a complete group.


Look at those wide-eyed bears with mischievous looks on their faces as they stand in a giant pair of briefs, one body protruding through each leg hole.  How can you not laugh?  On the back of this matching dust jacket and book case, the duo stands looking off to the left.  The one without any underwear holds a spyglass.  The text sums up this book nicely.

Hey, look! Here's a counting book that everyone can share!

The underwear hilarity continues on the opening and closing endpapers.  Shades of blue and silhouettes of the twosome show them first, boating over the waves in the daylight with the underwear billowing sideways as a sail and then, second, beneath a starry sky toasting marshmallows over an open fire.  Their tent...the underwear upside down.

Rendered in pencil, with digital color and assistance from Kristen Cella, Tom Lichtenheld begins the interior with a double-page spread of the huge underwear stretched across the gutter hanging from a clothesline, each of the bears peeking from behind a single tree.  The title spans nearly edge to edge above the line.  This, like all the subsequent illustrations, is lively and in full color.

For most of the book, Lichtenheld relies on a pristine white background to accentuate his detailed picture portrayals.  Three smaller visuals will be on one page with a single illustration following, showing a disappointed creature.  When everyone finally begins to see the benefit of sharing, the blue sky from the title page gradually fills in the white.

Lichtenheld's sense of humor and gift for capturing emotion are most noticeable on the single pages.  His picture of the seal on a tricycle while the others blast away on scooters or the baboon holding a triangle as the others toot on their trombones is hilarious.  He certainly knows how to please his audience.


One Big Pair Of Underwear words by Laura Gehl and pictures made by Tom Lichtenheld is a rollicking romp in rhyme.  Readers will count their way to a lighthearted lesson in sharing.  I think there is sure to be some clapping and toe-tapping along with a request to read it again.  You might want to have one big pair of underwear handy to heighten the fun.

If you wish to learn more about Laura Gehl or Tom Lichtenheld please follow the links embedded in their names to take you to their websites.  Each has extras you will want to use with your students or children.  This link to the publisher's website shows even more pages from the book.